I really goofed with my Chinook IPA. I dry hopped while there was a large amount of yeast in suspension and a fair amount of CO2. Hop aroma is almost nil. Between the yeast flocculating and the CO2 off gassing the aroma is gone. A very lack luster tasting IPA. The citrus of the bittering and flavor additions are there but on the weak side.

Seems like the citrus of Centennial and Chinook might blend but have never used them together before. Would I further wreck this beer by dry hopping with an ounce or two of Centennial to have some aroma? This is a five gallon batch.

Previous topic on the two hops.

Hey guys, It's been another year off brewing. I want to get back in the game with an IPA. I am planning to make an IPA using only Centennial and Chinook hops. I want a ton of hop flavor and aroma. I was thinking of bittering with an ounce of Chinook and then using 1 oz chinook / 1 oz centennial, at 20 minutes, 10 minutes, zero minutes and for dryhop. I was just wondering, is Chinook okay as a flavor/aroma/dryhop? I had always heard it was only for bittering, but was wondering if you guys…

If you’re worried it won’t be an above average beer without adding hops, then I definitely would add the Centennial.

I’ve only used Chinook in a blend with other hops in my Union Jack clone. It is used both in the boil and DH in that recipe but there’s a lot going on to give it a final fruity flavor so hard for me to say what the chinook contributes. I love centennial for DH so I’d say go for it.

I had a couple pints of my all centennial IPA last night watching the olympics and was thinking it needed a little aroma boost. Planning to drop another ounce or two in the keg today.

Heck with a couple oz’s… put in 6! You’ll be happy you did! I really enjoy the aroma and flavor from Cent, and well Cascade too! My IPA thats carbing now had 7 oz’s of Cascade… My few samples really make me want to not wait… Sneezles61

I also would have no problems using Chinook and Centennial together. I actually do a takeoff of the NB Chinook IPA and always mix in another C hop

Columbus, Centennial, Simcoe (or Amarillo) and Cascade all work well in an IPA. I like to use Chinook for Stronger Malt beers for its Pine and Spicy characteristics. I always Dry Hop in 2nd with 2 oz leaf hops for my IPAs. I just order the 16 oz bags online but I also grow them in the back yard. I buy pellet hops in 16 oz bags as well for the economy of it.

While I thought the chinook was a solid beer when I made it; I was thinking I would have liked it better with bit of centennial dry hopping.

I dry hopped with the centennial. I’ll give this one three days then bottle.

Is Columbus about 14%? I believe I did one quite a while ago and thought it was a powerful, dank hop… Quite a few peeps must like that flavor… I’m not a fan… Sneezles61

I’m not a fan of dank. Had a Pearl Street brew once. I think it was called something like Dakenhoppinfrankenheizer.

Not what I compare dank too.

The stickiest of the icky.

Bottled the Chinook IPA this morning. Aroma is very good. Can taste the difference with the centennial dry hop. Will still be a good IPA.

I went back to being a beginning brewer again. Sampled the Chinook after only one week of conditioning with a twenty minute chill in the freezer. 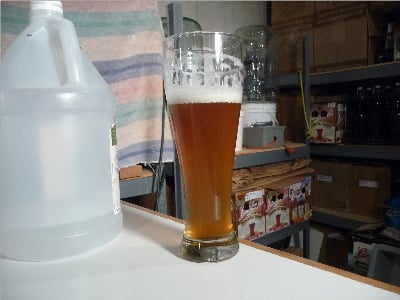 A little hazy yet and the head dissipated quickly. Yeast hasn’t fully compacted at the bottom of the bottle yet. It did have good aroma though.

This is what it should look like with a few weeks of conditioning and a few days in the refrigerator. 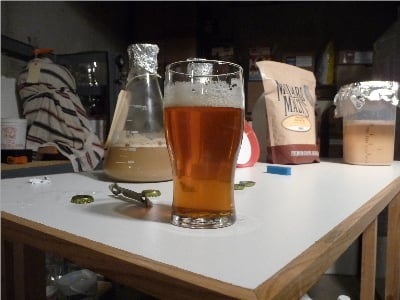