Made a 10 gallon batch of harvest ale split between two buckets…060 pitched at about 67deg. Bucket one pitched us 05 slurry( god knows how many generations) bucket two 2 packets of us 05 dry( didn’t hydrate)Slurry first burp 3 hrs.

Round one goes to slurry. This morning although both buckets are bubbling the slurry seems more robust. I guess I could have tried to figure out yeast count a little closer for this test. Anyone know off the top of their head.

Curius how do you count yeast cells with out. A microscoop. Do you take a grav reading ?

I was also having a problem with estimating yeast cells for harvested yeast. I changed from using a value of 1 billion yeast cells per ml to 2 billion per ml. Still had problems with the krausen looking like a solid yeast cake as with this IPA. 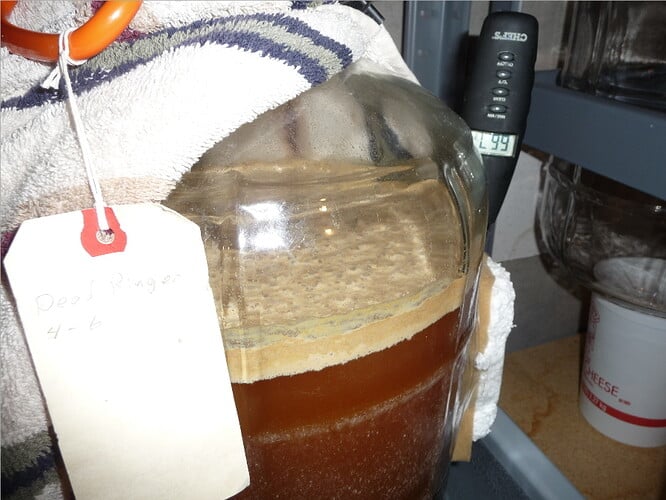 Another earlier beer, NBs’ Petite Saison, had an even heavier krausen of yeast. The saison turned out to have the most lack luster taste of any that I brewed. Thought it may be the estimated yeast count. Frothy white krausen tipped with bits of brown grain returned when I began estimating 4 billion cells per ml. Full flavor of the saison was back after this change.

Most recent starter for another IPA was inoculated with too many yeast cells. I was supposed to pitch one-third of the harvested yeast slurry in my mason jar. Instead I pitched two-thirds and saved one-third. The finished starter had a solid ring of yeast at the high level of the krausen. Yeast ring is just above the remaining krausen. 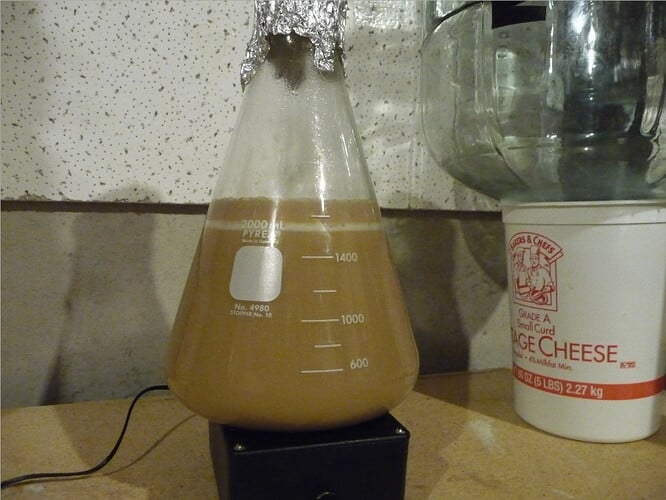 Resized482.jpg900×675 256 KB
Fortunately only about one-quarter of the krausen during this fermentation looked like a yeast cake. Probably will not notice a taste difference since this is the first brew of this IPA recipe.

Seems the Brew United starter/pitch rate calculator defaults to 4 billion cells per ml for estimated cell count. I will end up with 25 ml of compacted yeast in the starter volume saved when I have an overbuild of 100 billion cells.

It has been working for my harvested yeast. Perhaps sometime in the future my method will need to be changed.

Probably a little over pitch on the slurry. We will see in the finished product .

Update. Both fermenters keeping time. Will see which one finishes first. I believe this experiment is still valid. I would like to see where the final gravities end up and also the taste. I suspect the dry will finish first with a higher gravity. Anyone care to guess?

I would venture to shoot for slurry, yet, how fresh was it? I have done a slurry pitch and it did very well, when it was within 5 days from being pulled from a previous brew. Sneezles61

The slurry was about a month. Even though the dry took a few hours longer to start they kept time together. It’s been about 80 hrs and they are both slowing down to dueling bubbles. Neither one wants to give in. Maybe tonight I’ll take some readings

Do you suspect the finish being faster with slurry due to volume or perhaps health? Sneezles61

So now we have a conjecture of ideas… hhhhmmmm. We can possibly just go with the slurry was holding more, and was fresher, yet, the dry was able to catch up. Flars gives us 2 billion per mili litre,and BF calls it half… I’m still confused then… Sneezles61

I have begun estimating 4 billion cells per ml. Still have what seems to be very healthy fermentations in the same time frame. My harvested yeast has no noticeable trub though. Yeast harvested from an IPA does have some dry hop debris and still smells great a month or two later.

I’m starting to wonder about something… if you’re after a certain yeast character, I think a slight underpitch kind of leads to some desirable yeast esters. Can over pitching maybe lead to a “too clean” fermentation?

Thats kind of what I’ve heard. Maybe under pitch a wheat or Belgian. This is an ale. Actually the two packs of dry the BF calculator called it 22 grams and said it was low

Esters are formed from acetyl-CoA, which is also intermediate metabolite of yeast growth. Too much yeast growth (under pitch) leads to an excess of acetyl-CoA, but too little yeast growth (overpitch) will lead to not enough of the acetyl-CoA being metabolized, leading to higher esters. So both underpitching and overpitching can cause increased ester formation.

Which is better for a wheat.

For increasing esters? I’d prefer to underpitch, since overpitching can get away from you pretty quickly and make a mess. But I guess it all depends on what you want from it.