I made a Belgian golden ale over the weekend, and the original gravity was lower than the recipe called for. I know there are a few reasons this could happen, I’m not overly concerned with the “how”. My question is… should I be worried about the beer outcome? It was supposed to be 1.08 and it came out as a 1.065

I know this will result in a Lower abv, not worried about that either (it was supposed to be in the 9% range, now it’ll probably come out around 7 which is still pretty high) Just want to make sure it’s still Ok. I only recently started paying attention to gravities, I brewed for a long time before without ever worrying about it and now I wanted to get more serious about the process. 1.065 seems fine enough to me, and I bet if I never checked it, I wouldn’t think twice about the result afterwards… but now that I know too much, I am slightly worried. I could always add some DME to up the gravity… do I just stir that in? Or do I need to mix it into boiling water first?

IMO a 7% Belgian Golden is preferable to a 9%, because, you know, you can have more than one without picking yourself up off the floor. The flavor will be a little different if you are sensitive to the ‘warming alcohol’ flavor. It also probably won’t need to go through the mellowing period that high alcohol brews sometimes need. Overall, you’ll probably like it just fine.
Just have to say what you probably know- if it was an extract kit and you added all the extract and the correct amount of water, then your OG would have to be as the recipe says. If AG, then disregard.
Good luck Blue!

It was an all grain kit, 5 gallons. My sparge took less time than expected, and during the boil I had some weird foam that started to solidify and then sorta spilled a little when the boil started. Still got near the right volume, but those are my guesses as to what happened.

I don’t mind the lower abv, and I agree it probably tastes a little better and won’t kick my butt as badly. I just didn’t know if I should try to compensate now by stirring in some DME, or just let it ride. Like I said, if I had never measured the OG and just let the process go as I normally did in the past, I’m sure I wouldn’t have thought anything was wrong.

A couple days into the fermentation, where one would expect it to be very active, I would let it ride. I do check my preboil SG and do a few calculations to figure out the OG. If predicted low, that’s the best time to add some DME- during the boil.

So I agree for this batch, let it ride, but that’s still quite a ways to miss the target OG.

Can you add some details about the recipie? And what was your mash temperature and duration.

I’ve personally missed OG like that twice just off the top of my head… Once because I didn’t see my mill rollers slipped and I had a fair amount of uncrushed grain in the mash. And once because I forgot to add the sugar addition my recipe called for.

I left it around 150 degrees F for an hour in the mash tun.

Like I said, I think my two main issues were:

my sparge Time was super fast this time around. I was getting clear wort within 20 minutes of recirculating, usually it takes me closer to 40. I’m guessing I should have just kept recirculating anyways, but I chose not to for some reason.

Then the hot break that occurred during the boil. It didn’t look like a huge deal at first, but when the bubbling liquid finally broke through the hot break, it splashed a little, essentially boiling over. Overall I might have had too much liquid to start, as my pot holds 7.5 gallons or so. I collected a little more than 6.5 gallons, still resulted in 5 gallons of wort at the end of the boil. Maybe next time I will start with 6 gallons instead of 6.5, to prevent any more boil over. I use a home built electric pot, so I CAN get a bigger one and just build again, but I’d prefer to not go through that again right now if possible.

Just glancing at your grain bill it looks like OG is right on track. I don’t see how you could get 1.080 out of 12 pounds of grain. At 7% you can at least enjoy a few…

Recipe called for 2# of candi sugar during the boil… sorry forgot to mention that. But yea I’m all for 7% abv, just worried about the taste.

I’m planning to do some fruit flavoring and lactose probably too, so I doubt any of this will matter in the long run

I wouldn’t tinker… You may have a very quaffable brew right there… IF you wanted to raise it AND had room in yer fermenter, then boil the 2lbs of sugar in a quart pan, cool it, then add to your fermenter… I would leave well enough alone and chalk this one up to notes/schedule attention… RDWHAHB! Sneezles61

I doubt hot break had anything to do with lower efficiency. I BIAB and do have fluctuations in efficiency but they are always pretty close. Did you stir during your mash? Some good tips here… 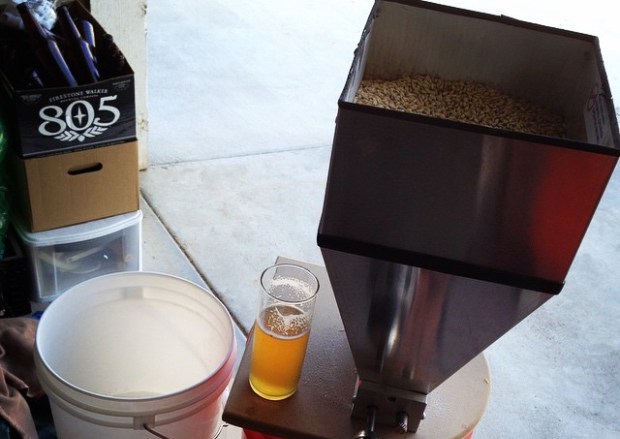 6 Tips for Dealing with Efficiency Problems

Author: Marshall Schott Of all the process concerns/complaints I hear and read about when it comes to homebrewing, one seems to pop up more often than others: shitty efficiency. This typically take…

I have never really stir during the mash. I did stir once during sparge to make sure the water was sleeping through the grains more, but next time I will stir a little better for sure!

The only reason I feared about the hot break was that it formed and then lots of it “exploded” into a boil over. So I basically lost a lot of what comprises the hot break.

Like I said, my sparge only lasted about 25 minutes. Which means I recirculated my wort a few times, but not as much as normally called for. I admit, it’s my least liked part of brewing so I was happy to be done so quickly. It’s boring for me to just pour into a container, then pour the container back into the tun. I guess I should just suck it up to be more careful next time. Maybe I could use a pump, place it into the container and have it recirculate back into the run for me, thus eliminating the boredom?

A while back, I was instructed to do the basics for all grain:

1.3 quarts per pound of grain, raised to 15 degrees hotter than the mash temp. My mash tun is a fermenters favorite cooler, so it’s supposed to hold the temperature pretty well.

I would recommend you check all the basic stuff during mash like temperature and ph. Figure out your water profile. Make small increases in efficiency each time. I thought I had nailed it when I hit 80% one time but I have been at 75% almost every time since which I’m fine with since that is what the recipes I use are designed for.

Are you using a brewing program to maintain recipes and create recipes? If so which one? Is the efficiency set really high?

Where are you getting these recipes? Do you pay attention to the recipe efficiency if you borrow one?

Explain your sparge in detail. You keep saying you recirculated for 25 mins but usually 40 mins. You should only vorlauf until clear then start your sparge into the BK. The vorlauf is returned to the MT. You don’t need to vorlauf the entire time your sparging.

So this particular recipe came straight from NB, so I didn’t use any software to check or design.

My apologies for using the terms incorrectly. Votlaufing is the thing I think is boring, and it went quicker than normal as well. I vorlaufed until it was coming out clear without sediment. Then I fly sparged by opening the valves on the hot liquor tank and the mash tun to get similar flow rates. I usually batch sparge because I prefer it betters for some reason, but people always tell me that fly sparging is supposed to be better.

Regardless, the time it took to get clear wort was less than it usually is. Then, once clear… gathering ~6+ gallons of wort took about 25 minutes. It really felt like the water was going through the grain and back out much faster than in my past experiences. That’s why I thought maybe it wasn’t getting enough of the sugars out from the grain, because the water was going through the grain so quickly

Yeah a 25 min fly sparge is the culprit. Got to match that sparge with run off and should take 45 mins to 60 mins.

At this level it really doesn’t matter if you fly or batch sparge. You may get a little better efficiency but it’s negligible at this level. If it falls add a little 2 row. Commercially efficiency is a big deal because your talking about adding 50-100lbs. Do what your comfortable with.