Is it better to harvest yeast from the primary or in my case out of the secondary? It will be the second go round with this yeast 1272.

It’s ok to harvest out of secondary, but it’s best to harvest from primary. By harvesting from secondary, you’re selecting for less flocculant cells which eventually will lead to a hazy beer, and changing the basic properties of the yeast as they’ll be adapted for a different environment.

I don’t think there will be any significant consequences from harvesting from secondary once, but the next time you use this yeast it would be better to take it from primary. And you can re-use yeast many many times - practice good sanitation and pitch as healthy of a culture as possible, and you can keep it going for a long time.

Ok thanks for the info my first all grain is still in the primary. So when I harvest this batch do I need to wash the trub out as much as possible, or leave it and plan on making a starter when I brew with it again?

No - the trub is fine, it won’t have any impact on the subsequent beers. You probably introduce more risk of contamination by trying to wash the yeast, and you end up throwing out a lot of it with the trub.

If I’m going to save yeast, I’ll sanitize a couple pint jars and lids along with a measuring cup. Once the beer is racked to secondary or a bottling bucket, I’ll swirl up the remaining beer and trub and scoop out a couple measuring cups full and dump in the jars. Leave the lids loose for a day or two to let pressure out, then store in the fridge.

If it’s less than a month since harvesting, I’ll just dump the whole jar in without a starter, otherwise a starter is a good idea.

Thank you for the great information.

Sure, you probably have enough yeast in a typical yeast cake for 3 or 4 batches. When you’re done racking the beer, just scoop or pour the yeast cake into sanitized jars and store in the fridge - even with all the trub in there it’s WAY more yeast than you get in a White Labs or Wyeast pack. I usually save a jar or two and dump the rest.

Best to refer to a pitch rate calculator for estimating how much yeast slurry you need (paging @flars!) but I usually just dump a pint jar of slurry. Most of the time it’s an overpitch, but I’m ok with that.

Mr. Malty has a repitch tab that you can use:

Here are the instructions:
http://www.mrmalty.com/calc/repitch.html

Common take on this around here is that washing is unnecessary. Just scoop up your yeast into a sanitized jar. I agree, washing seems like a pain. Just scooping and collecting is much easier.

Even better, dump your yeast cake into clean, sanitized beer bottles and cap 'em. Takes up a lot less room in the fridge and you don’t have to worry about the jars cracking from pressure.

Harvesting yeast can be simple or it can be hard. Yeast rinsing/washing is the hard way. I did this the first few times harvesting. I would end up with only about 100 ml of yeast. Lot easier to use Brew United overbuild calculator for a starter than harvesting with the rinsing method. I am currently using the overbuild method to produce yeast for the next starter.

I still harvest just in case my starter overbuild yeast would get infected or somehow lost. I’m planning for the worst case scenario.

I had lost faith in Mrmalty because the viability calculator had never been tested by cell counting, but was interpolated as a linear progression of viability loss. According to Mrmalty a 3 month old Wyeast Smack pack would only have 10% viability. Brew United 50% viability. I went back and looked at Mrmalty this morning. It seems the calculations are logical if you manually enter the percent viability, as calculated in the Brew United calculator and adjust the sliders for the way your yeast looks.

I have had a few unusual fermentations. May be time to reevaluate my use of 2 billion yeast cells per ml. May be way to conservative. I’ll have a new topic a little later to get your opinions. Might tile it, “Yeast krausen”.

I have been doing something as what Flars refers to as overbuild starter… I got it straight from Denny, called culturing… If you do it right, you will have enough to git you thru a few brews, AND no trub! Sneezles61

Harvested yeast/trub from a 1 gallon batch I did a while back. Put it in a jar with a cup of DME and a couple of cups of water about 5:00 AM today. Got a nice krausen in it by the afternoon. Did a full boil extract and pitched it. Looking good…

Got about an inch of nice white krausen and steady airlock activity. Room ambient is 55 DF.

What kinda yeast? Ale, warm it up to low to mid 60’s. Lager, you’re close enough. When the krausen falls back down, maybe in a few days, then start to let it warm up to room temp to finish its job. Sneezles61

I’d warm it up. Right now its very cool, and will continue to work, at a slower pace. Low 60’s, if you don’t have a good way to control fermenting temp… It will create heat as it ferments. Sneezles61

Checked ambient with my brewing thermometer and read 62DF. All good.

Made this starter yesterday from yeast harvested the first part of March. Saf05 for an IPA we’re brewing today or tomorrow. 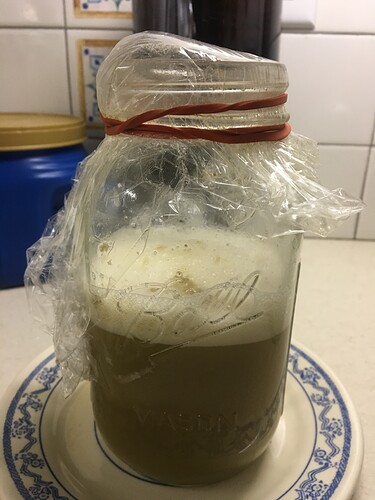