Who makes a New England IPA

Brewed my first and it’s not quite ready but initial tasting seems promising. Now until recently I believed NEIPA was just an IPA brewed in New England . I have just found out it’s a distinctive style. I believed they all needed to be straight citra but that is not the case Julius which beats HT and SOS in many reviews only uses a little citra. I’ve just made a 10 gallon batch one is dry hopped 100% citra the other is a blend of citra and cascade. Wondering who else is making this style and what they do different from a standerd ipa

I have made two ipas…both 3g batches…with 7.5 oz of hops used between 5 minutes left in boil and dry hop…including 20-30 minute hop stands…galaxy, azzacca, and nelson sauvin hops used. One of these is still in primary…but one is in the keg…around 80 ibu but is not bitter at all. Only used a single dry hop…so im not sure if its an neipa

From what I’ve read the bittring hops are not added before 45 min. A hop stand is employed. And it should be foggy like a cape cod morning

Here’s what I do.
Use 20% flaked oats (you could go higher) and 10% flaked wheat. NO CRYSTAL MALT.
Treat your water with a 2-1 ratio (or higher) of calcium chloride to gypsum. You want the soft round mouthfeel.
Tiny bittering charge and 6 oz of hops at flameout. Choice of hops should tend toward the juicy and away from the piney. It’s not all about the Citra.
ferment with WY1318 or conan.
3 days into fermentation add dry hops (pellets)at a rate of 4oz/5gallons.
When fermentation is complete rack into a keg with another 2 oz of dry hops.
Drink fresh

This is an emerging substyle. And not every new england brewery makes beers in this style. Maine Beer Company, who makes some of the best IPAs in NE, they do a west-coast style for sure. On the other hand, Cellarmaker in San Fransisco… squarely in the NEIPA camp.

How long do you ste the game out hops before chilling?

I tend to not do long hopstands but I think that is a parameter worth experimenting with. The big thing for me is i’m not interested in really extending my brew day.

A couple of pointers I have found helpful in brewing 10 or so of these per year:

-Esters are equally important, if not more important than truckloads of hops:
Conan Yeast aka VT ale yeast is very temperamental generation to generation, but generally, generation 2-7 are the best, according to Kimmich, who uses only this yeast. I would recommend brewing a low gravity beer like a mild for 1st gen, then repitch
You do want some yeast growth. We have had good results both pitching at 62 with a quick ramp after 24 hours to 68, and pitching and holding at 68.
There are also supposedly some good Brit ale yeasts out there (IIRC London Ale III) that are a little more consistent gen to gen and will give you similar ester profiles.

The yeast is generally pretty powdery and doesn’t floc well, so haze is attributable to that, high protein content in the malt of choice (TF Pearl), and hops
I personally think the “Glass of Fleishmann’s Yeast” beers like Treehouse are overrated and gimmicky. I find HF, HT, SoS, and Trillium to have a much brighter hop character and great citrus/stone fruit. Too much yeast gets in the way, but don’t do more than a simple 4-7 day cold crash to get the heavy stuff out. No gelatin.

Recipes:
Bear Flavored’s Heady Topper clone is really solid. There is another recipe out there for SoS that we have used with good results (IIRC it uses Chico and oats). 90% good pale base malt, touch of wheat and maybe carafoam for head and mouthfeel.

Hops:
Ideally, you want hopshot at 60 (or even a bigger quantity at 30), then all flameout/hopstand and dry hops

Oxidation:
I am a believer than oxidation ruins beers WAY more often than homebrewers realize. Closed loop transfers from fermenter to keg, spund/naturally carb if you can. Big dry hop additions during active fermentation have worked really well for us.

Watch this1. Then watch it again. Lot of great clues in there.

Good luck!
Ok @pietro I moved you over to this post, a couple things , I havnt watched the video but I saved it to my play list and intend to watch it. I havnt used the hop shots but have read about doing the hop additions late to keep that bitterness in check. HT is not my favorite nor SoS but I do like the trillium beers which I get often up in Btown. Now the NEIPA I have going now is OK but no head. The bomb around here is fuzzy baby ducks which I have had but I’m not waiting in line, I just don’t do that. I’ll have a guy who loves waiting in line so I’m trying to get some yo do a side by side. It’s a tap only and you never knows when it’s coming so I will have to wait on that.

brew_cat I’m pretty sure FBD is just a 100% Citra version of Sea Hag.

I havnt had it for a couple years so I don’t remember exactly . Before I understand rd the nuances of New England vs northeast IPA. That’s why I’m trying yo get some delivers. I have seen it compared Julius so I assumed.

I was thinking of trying bittering addition at 45 min in which case you only need to boil 45 min and do a 15 min hop stand. So you wouldn’t add any time to your day.

Ok @wahoo here are the results. This beer is great , not sure if I hit the New England style mark but great beer. Now the tweeks. I was 10% oats I’m going to move that up to 20% like you suggest. I’ll keep the hops schedule the same for now. I’ll also move the bittering up to 45 .That’s all I’ll change on the next batch. Actually I split the batch and did use different dry hops in #2 but havnt got into that keg yet. 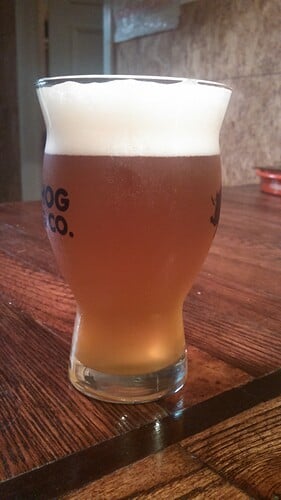 Does that look cloudy enough. Been kegged three weeks. My regular IPA would be super clear by now

Had a guy visiting the Brew Cat Pub. He brought a can of Bright from Tree house. I switched him mine and I drank the Bright. He never new. Next time he stops by I think I’ll make him wait outside for a half hour or so. The guy judges his beer on how long he has to wait in line.