Hello - first timer here! I got my Block Party Amber Ale Homebrew Starter Kit and did it tonight. Everything seemed to work just fine. I even tested the two buckets for an hour to check for leakages (and after hand tightening there were no leaks). But when I finally got everything into the fermentation bucket I noticed a very small leak. Maybe a couple of drips per hour. Is this anything I should care about?

I apologize if this has been asked before. I did search the forum for “leaks” but didn’t find this specifically.

Thanks! I’ve tried to upload a picture. The leak does not appear to be from the spigot itself, but from around the spigot. 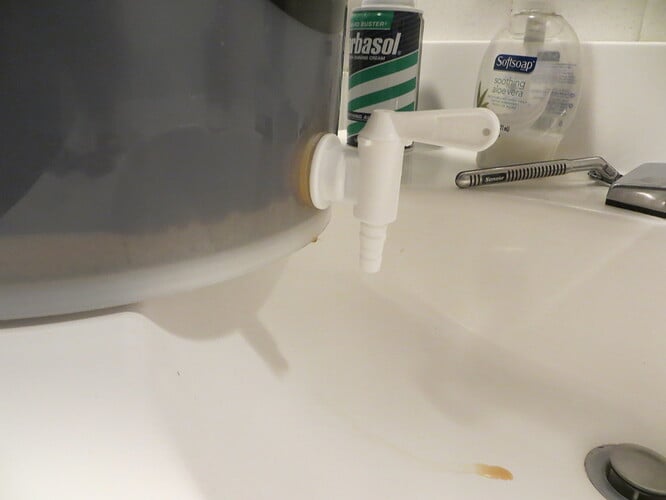 They do leak sometimes. First off I wouldn’t worry too much about it. The pressure should be outward so less chance of anything bad getting in. Those spigots are tricky to get sealed sometimes. You could try giving it a little twist from the outside only but risk making it worse.

I would just put some paper towels under it, maybe with a little sanitizer on them and keep an eye on it. It might just stop leaking when the sticky wort dries on the outside. The only way to really tighten it means holding the nut on the inside and that means reaching in there. Not a good idea if you can avoid it.

The last batch I did in a bucket had a spigot just like that and it had a small drip I noticed after it had been sitting for a few days. It stopped before I noticed it and it turned out fine.

Thank you! Your response makes total sense to me (especially with
respect to contamination). At this time the leak does appear to have
stopped, as you guessed it might.

Again, thanks for the quick response. Cheers.