Hello All,
I’m a new brewer and just finished bottling my first brew,Caribou Slobber, and am VERY anxiously waiting. While I was bottling, I lost a lot of beer

My racking cane leaked from the beginning and I had to control it by the spigot on the bucket. My bottles were very inconsistent on head space because the cane didn’t stop when I pulled it up. 3 quick questions:
Is the beer supposed to drain out and empty the cane when you pull up or does it continue until its empty?
If so, can I just bottle from the spigot as I have seen on videos? and finally
Can I adjust the racking cane somehow or is it just broken?
Thanks for any help. I know this seems elementary but I don’t want to purchase another cane if I can adjust it but don’t want to lose beer cause that’s just wrong!

When I first starting brewing we used the racking cane (siphon) to fill bottles. Using a siphon requires pinching the tube above the bottle to stop the flow. The tubing below the pinch would drain into the bottle. We would get tired fingers from the constant pinching to stop the flow. We did slop a lot of beer with this method.

We switched to a bottling wand with a plunger in the bottom at the end of the siphon tube… The flow would start when the plunger was pressed to the bottom of the bottle. The flow was supposed to stop when the wand was lifted. The weight of the beer in the tubing above the bottle theoretically would stop the flow. Still had a lot of dribble when the plunger would not seat completely.

Now I’m using a bottling wand with a spring in the tip that seats the plunger when it is lifted off the bottom of the bottle. I would recommend using this type of set up with the wand attached to the bottling bucket by a short piece of tubing. This is the type of wand I’m using. There are two different diameters available. The 3/8 inch diameter wand will fill with a smaller amount of head space than the 1/2 inch diameter wand that can also be found… Filling beer and wine bottles is easy with the Northern Brewer's Bottle Filler with gravity-operated valve.

This is an old picture of my set up for bottling. 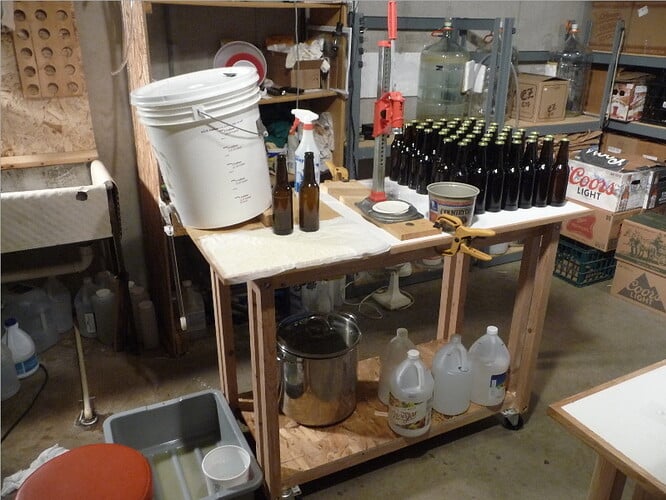 Edit: The spigot and a short piece of tubing can be used to fill bottles but will allow more air into the beer. Oxidation in the bottle will occur sooner. Might be okay if you plan to drink the beers rather quickly.

Guess I should have said bottling wand and mine does have the spring also. I’m guessing it’s just not working correctly. Thanks for the response and the pic of your bottling area gave me some good ideas. Thanks!

The tip of my bottling wand is removable. Pull the tip off if yours is also removable. You may have crud in the tip keeping the plunger from closing all the way. Also make sure the spring is not upside down in the tip. The end of the spring with the bent wire going across should be in contact with the flat of the plunger. This will firmly seat the plunger to stop the flow.

Edit: Is the o-ring under the flat of the plunger in place?

I just tried to take it apart and it doesn’t budge. I think I’ll have to purchase another because I don’t think there is a spring in it. Thought it was kinda floppy when I started but never used one before yesterday. No spring would explain it being floppy and why the beer doesn’t stop flowing. I appreciate the help and responses.

Some of them don’t have springs. I have both and they both work what’s nice about the spring load is stops the flow anyway you hold it the gravity one you have to hold it vertically to keep it tight if you tilt it to much it will break the seal and leak. I mostly use the spring load the other is backup

I think you are right. Mine may not have a spring. I’ll have to be more careful and see what happens next time. I already have my 2nd batch, coffee stout, in primary so may be another week or 2 before I use it again. Thank you for the input. Can’t believe I spent half my life not doing this! It’s addictive!

It is well worth it to buy one with a spring if you can. They work better, are much more reliable, and because the tip is removable, they are easier to clean well.