Hello, I need some help with a batch of Chinook IPA I tried to brew. The colors in the fermenter were pale and almost a murky yellow. However, the video I watched for the Chinook, showed a much darker, richer looking IPA. I tried the wort after it completed Primary Fermentation 10 days after brewing, and the flavor was bland and almost expired tasting if that makes any sense. I have now moved the wort to the secondary fermenter, where I added the dry hops in and am now waiting for another week before bottling day. However, I am expecting this batch to be ruined.

We brewed on an electric stove top, and to be honest, the boiling that we saw happen was not an aggressive boil over as I’ve seen in other cases, but was rather mellow and unreactive. Even when we added the hops, nothing significant occurred at the boiling stage.

My theory for what could have happened was.

A: The wort did not boil as intended causing a change in flavors.

B: The temperature in my house (approx: 76-78F) was too hot for the yeast to properly convert the sugars into alcohol.

C: Too much sediment went into the primary fermenter when we first transferred the wort.

Any idea what else could have gone wrong? Other than what was previously stated, we followed instructions very meticulously. Everything was sanitized properly and we had good bubbling during fermentation all the way til the transferring into the secondary fermenter, which was also properly sanitized. Krauzen had developed well creating a nice 1-inch approx, head of foam.

Help? Is this batch ruined? Should I wait til I add the priming sugars?

B: The temperature in my house (approx: 76-78F) was too hot for the yeast to properly convert the sugars into alcohol.

This is potentially a big issue. Yeast actually prefer higher temperatures, but they tend to make a bunch of bad by-products that can lead to a solvent-y flavor in the final beer, and lead to some horrendous headaches. You really want to keep the fermenting beer in the low to mid 60’s for most yeast strains. If you can’t get the temperatures that low, no worries - but check out the Kveik yeast strains that are available. They ferment cleanly all the way from 60F to about 110F.

but check out the Kveik yeast strains that are available. They ferment cleanly all the way from 60F to about 110F.

I think I am going to have to. I can’t reach those temperatures without incurring high costs in electricity… So I guess I’ll research the Kveik strains in order to properly brew here! Thanks!

There’s a knack to tasting flat beer out of a fermenter and figuring out what it will taste like carbed and chilled. It’s difficult to figure out right away. The high fermentation temperature is a potential problem, but definitely still bottle and try your beer. Warm, flat, pre dry-hopped IPA is not going to taste like the final product… it might even taste stale and old.

That’s exactly how it tasted like. Stale and old and it was very disheartening. Given that this is my first brew ever, I am still following through the process all the way til bottling day and then some. I want the experience so that my next brew turns out better.

I bought a carbon water filter, and a dark star gas burner for boiling. I got a 5 gallon kettle with an included thermometer and will be trying to brew an all-grain stout. However, I did buy a stout from Northern Brewer so I might try that one first, it just hasn’t arrived yet. Maybe before starting it I will post my progress here and ask for pointers, rather than going it solo. Thanks!

My advice as a pretty new (3rd batch fermenting as we speak) Brewer is to not worry too much at this point. I got really worked up on my first batch because I “ruined” it. Go through your process and bottle and let condition. Chances are it’s not going to taste exactly like you want it to on your first batch (mine was bad!!! But I drank it anyway) but that’s ok, learn and perfect the process. Thats why I’m doing it anyways…have fun and welcome!

I got in touch with the guys at Norther Brewer and they said this:

Thank you for contacting us. I would not count this batch as ruined. Lack of boil can lead to cloudy beer and less hop character, but should still make a good beer. Beer can taste very strang when tasted young, especially at day 10. Dry hopping will add even more hop character as well.

The temp range of your house is great for yeast they love it in that range but can cause extra fruity characters in the beer. Same with the trub (sediment) from the kettle, there is a lot of healthy vitamins in that for the yeast to consume and help their growth.

If anything it just because of the lack of boil.

I would add the dry hops and then check it after two weeks and go by that flavor. If its good bottle it up.
Please let me know if you have any more questions.

So maybe the yeast wasn’t the issue. It was probably the boil!

These guys at NB know. it also never hurts to allow the the yeast another week (e.g.4 wks 3+1) if you are not sure. Experts say to always maintain a rigorous boil. You could move to All Grain. Blichmann TopTier burner lit the brewing world on fire in 2009 with the first burner made specifically for the needs of the homebrewer. No wonder it became the best selling and most respected homebrew burner in the market.

They sure do! I got the Dark Star burner that they use in the video, and a 5 gallon kettle with a thermometer included. I do have an all grain recipe from Strange Brews.

This one to be exact! But I have been hesitant to try it out since I know nothing about all-grain brewing. I know that you need to mash the grains and sparge the sugars to get the wort, but my lack of experience is somewhat worrying. I also don’t have any particular equipment for sparging. Is there a particular home method to getting around this?

If you go with a less phenolic species and strain, brettanomyces can be one of the best ipa yeasts you can use. And very tolerant of high fermentation temperatures. And as an anti-oxidant, some of my brett IPAs maintain a hop forward character for years.

You have to punish yourself for making bad beer it will make you try harder to make good beer. If that doesn’t do it we will have to try shock therapy

But I have been hesitant to try it out since I know nothing about all-grain brewing. I know that you need to mash the grains and sparge the sugars to get the wort, but my lack of experience is somewhat worrying. I also don’t have any particular equipment for sparging. Is there a particular home method to getting around this?

Biab, all that you would require is a bag, easily and cheaply obtained from a hardware store. That and of course a method to grind the grains.

My theory for what could have happened was.

A: The wort did not boil as intended causing a change in flavors.
Boil is important to get to desired gravity and a host of other important reactions detailed here:
Kettle Reactions - The Science of The Boil | MoreBeer

B: The temperature in my house (approx: 76-78F) was too hot for the yeast to properly convert the sugars into alcohol.
As mentioned before, fermentation temperatures are one of the most important variables we can control. If you can’t control the temp pick a yeast that’ll work for you. @wilcolandzaat is all over warm climate fermentation and may be able to offer advice…

C: Too much sediment went into the primary fermenter when we first transferred the wort.
Not a concern.at this point. I’ve brewed almost 60 batches and played the clean vs. trub filled wort game on identical beers. My palate admittedly sucks but I’ve not been able to detect an issue with trub in the fermenter.

Don’t worry too much because it’ll probably be beer. Think about possible improvements based on the concerns you have and figure out incremental improvements. Being a new brewer myself, I figured out that Rome wasn’t built in a day and neither was brewing the best beer I can make. Enjoy, RDWHAHB!

Me do use most the time kveik yeast. Works perfect in a warmer climate. And cleans up real well. Only advise leave it one week longer fermenting than you did plan. Me leave 10 days primary fermentor. Than 4 to 6 weeks secondary. Depends on the grav of your brew. And your target. Fg

If you are interested in taking a look into AG, Dennybrew is a great place to start. Denny pops on the forums on a fairly regular basis and this website is a great introduction to batch sparging. All you need is a cooler and a stainless toilet braid you can get from any hardware store plus a minikeg bung and a couple clamps and high temp hose. You can put a mash tun together for under $100 and the biggest cost would be the BLUE cooler. Red coolers don’t make as good of beer.

I’ve been using mine for going on 4 years with no issues.

This is the color it shows in a dark setting, when lit the color is still gold looking. 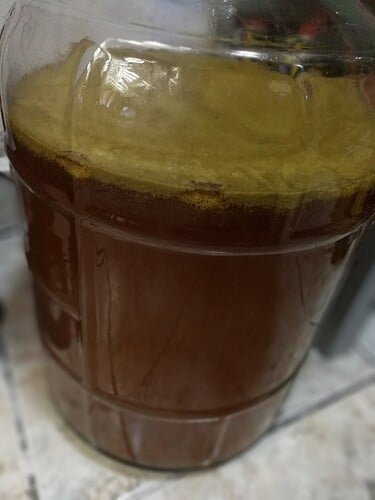 Looks delicious to me!!

Looks normal and great. Taking a picture of a carboy can be tricky. Most often the pictures look darker than it really is because of how the camera reads reflection from the glass.