So I’ve only done one 5 gallon batch so far but I’m looking to brew something for this warmer weather we should be getting soon and I have a La Petite Orange, and American Wheat extract kit. Does anyone have any suggestions as to variations for one of these? Or suggestions for brewing them?

Never had either, but from what I’ve heard on here, either one, when brewed well, will accomplish what you are looking for.

My personal advice would be to brew them as-is, then figure out what you would like different, and go from there. But I certainly do understand the desire to riff on good recipes. I guess the advantage here is that once you taste them, you will know what you like and what you don’t, and you can get a better sense of where to go next. (bigger hop aroma, more/less esters, drier/sweeter, etc.)

Being that you are a somewhat new brewer, how are you controlling fermentation temps?

Currently I’m just sticking them into my spare bedrooms closet and letting them sit there… The house is usually kept around 72 degree and its a bit colder in that room and closet as no one ever goes in there.

Ok thats a decent place to start, but I would at a minimum place the fermenter into another vessel/tub with 5-6 inches of water in it. When the yeast go to work on the sugars, they generate heat, which means something fermenting in a 72* room could get up to 77* (or higher), which means lots of esters and even boozy (fusel) alcohols…aka hangovers.

The water bath will create a bigger thermal mass and make it harder for the yeast to raise the temp. If you really want to believe me, buy an extra fermenter and split your next recipe into two fermenters before pitching yeast, one in the bath, one just in the closet. I would bet my 401 that you can taste the differences.

Aside from sanitation and yeast pitching rate, controlling fermentation temps is the single biggest step you can take in turning ‘homebrew’ into ‘beer’. Note I did not include “going all-grain” in this list

I will say, with Petit Orange (I believe it uses Belle Saison yeast), you can ferment in the upper 70’s and make a solid clean (ish) beer. High 60’s for most ales is where its at though…

Going all grain will be a goal to reach someday! Alright ill definitely look into finding something that I can set the fermenter into… Thanks for the advice! Just 5-6 inches is enough? Do you change that water ever?

I might have screwed up my first one (Block Party Amber Ale) due to high temperatures but I haven’t been able to taste it just yet. 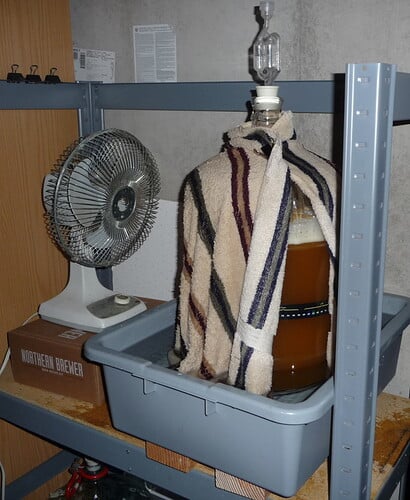 I add a tablespoon of bleach to the water. Prevents mold growth and the need to wash the towel after every use.

The fan is for extra cooling power with the higher gravity brews.

Ah I see! is that more fermenters on the bottom shelf?

ExtremeMe check out the Cool Brew cooler for fermentation temps. https://www.cool-brewing.com/
I have one and it works extremely well. Its basically a large well insulated soft side cooler to place your carboy or bucket into. Would be perfect in your situation as it does not involve a tub with water, only frozen liter bottles or even ice packs. I use both and have kept my fermentation temps in check. In fact I had to be careful not to get too cool at times. I have only brewed two extract kits but this has been a great asset to my set up.

As a matter of fact I have La Petite Orange fermenting in one right now, going on the second week.

I have done both. Just did a ten gallon American wheat and split it. I added the peel and juice of one lemon to one batch and the peel of two blood oranges and the juice of four to the other (from a Dog Fish recipe in Popular Mechanics of all places). Hope to keg both this weekend.

I really simply variation you could make to the Wheat is adding a fruit flavoring at bottling. Last year I made a Watermelon Wheat based on one I had on the California coast and it turned out fantastic. Just added one bottle of the watermelon beer flavoring at bottling and it was a big hit for the summer. Good luck!

I do like yer recycling technic there with the NB box!