First, my apologies if these questions have been answered previously or if they’re a bit amateur. I’m brewing my first batch and opted for the Northern Brewer Small Batch Black IPA. I brewed this batch about 15 days ago and planned to bottle after two weeks per the instructions. I’m not quite sure what it should look like before I bottle so I’m reaching out for a little direction. Also, there are these smaller bits of bubbles around the surface… is that normal? Thanks in advance! 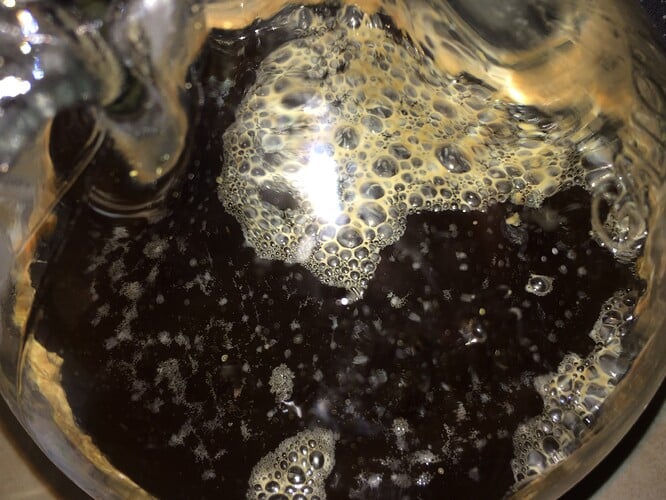 Looks normal. The bubbles are dissolved CO2 off gassing.

Word of advice, don’t go by the calendar. Beer can’t read calendars and is ready when it’s ready. It’s fine to have a general timeline but make sue it’s ready.

Congrats on your first batch!

I have not done the small batch version of this but I just did the AG kit. FWIW I brewed on August 30 and put in keg September 30. I dry hop in keg, so I added the dry hops October 11 and put in kegerator October 16 before I left for two week work trip. It was fully carbed by November 1. The directions tend to be faster than I can turn beer, so I try to brew enough in advance that I never run out.

Typically more time in carboy won’t hurt. You want to test the FG if possible compared to the OG if you have a hydrometer. If the FG stabilizes out and doesn’t change for 3-5 days, it’s done.

I brewed the extract black IPA 2 years ago. I let it stay in primary for 6 weeks then dry hopped at room temp for 7 days before I bottled it.

I brewed it in March bottled in late april and we drank it at my son’s wedding in October. It was freaking awesome.

It’s even more awesome now 2 years later. I still have a few bottles.

@loopie_beer Got it! Thanks so much! Appreciate you taking a look.

@radagast Thanks so much for the tips! I’ve definitely got to invest in a thermometer.

@dannyboy58 That sounds pretty incredible – and an even better wedding gift. I’ll keep those notes in mind as I start to experiment a little more. First time around I was really just trying to avoid blowing up my kitchen.