Yesterday I brewed my first batch of NB Chocolate Milk Stout. Only two hours after sealing the fermenter with an air lock, the stout began to ferment at a very rapid pace. The average temp in my storage room is approx: 76-78 degrees fahrenheit and could sometimes be warmer.

I was afraid of accumulating pressure so I switched from a standard airlock to a blow off tube with a sanitizer pool.

Any comments on how this is looking? Is it ruined? Does it look like a healthy fermentation is taking place?

This is my second batch of beer I have ever made and felt that the brewing went beautifully smooth, just wasn’t expecting this type of reaction! 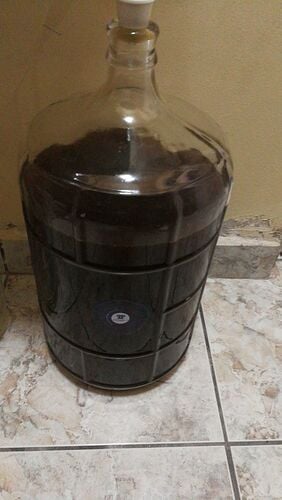 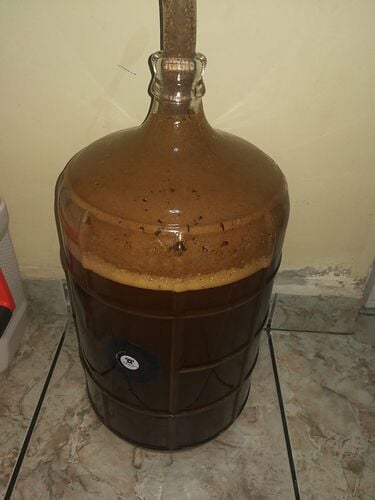 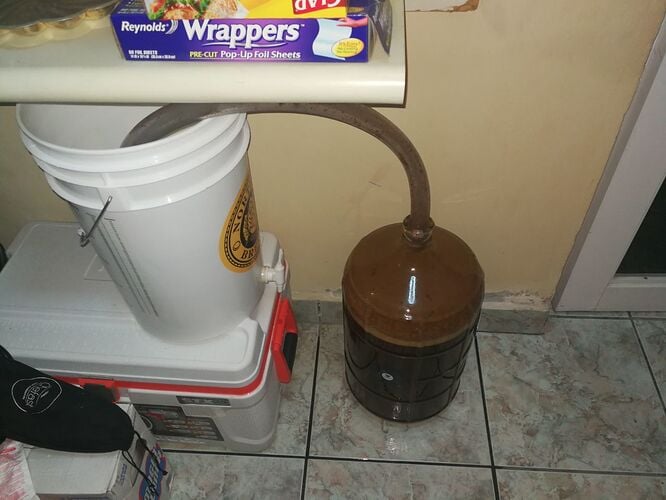 That is a very warm fermentation for the typical yeast used to ferment a stout. Off flavors will be produced when the fermentation is too hot. Which yeast did you use?

Search the term “swamp cooler”. This is the simplest and most economical method of keeping the fermenting beer cool when the ambient temperature is moderate. Your ambient temperature is rather high. You would need to supplement the swamp cooler water and fan with ice bottles to further chill the evaporating water. Good thing is the temperature only needs attentive control of the first three or four days. Once this amount of time has passed the flavors have been set in the beer. The beer can then be allowed to warm to finish and clear.

Can you set the fermentor in a tub of cool 62°F water? This may cool the fermentation to avoid hot fusels from being produced. A deep tray will also absorb heat from the fermentor.

Thanks for the reply, I moved the bucket under the carboy and the aggressive response seems to have stopped. Now I’m getting a few bubbles at a time I think I’ll switch it back to a regular airlock today and let it ferment as normal. About the temp, there really isn’t anything I can do to lower it I’m afraid

Not even a tote or tub to set the fermentor in? The water will act as a heat sink drawing off some of the heat produced by yeast. Soda bottles with ice will further cool the beer.

Could use the kitchen sink as a tub but that may cause conflict in the house.

Maybe I’m wrong here, but it looks like that carboy would fit in the cooler that’s holding your blowoff bucket. Can you use that as a swamp cooler? Also, keep your beer in the dark, draping a towel over it will do.

It’s very understated, but temperature control during active fermentation, probably has the biggest impact on beer quality that a new brewer can get. Everything else people do is icing on the cake after that.

Whatever the room temp is, you can expect active yeast to be 5-10 degrees higher. With luck the beer will be drinkable, but I’d expect a bit of jet fuel flavor. Most fermentation is like good BBQ; low and slow wins the prize.

If you really can’t do anything about temps, then look to beer styles and yeast strains that work well with what you have. Belgian strains like it hot, if you’re into clovey, spicey beers. (I do, yum) Also, kveik yeast stays clean at higher temps — never used it personally, but others on the forum swear by it.

My first batch was a Chinook IPA and the color and taste came out fruity and smooth, almost lite. I do believe that this was caused due to improper boiling on an electric stove top at 180 degrees (should’ve been 212 degrees). I could use the cooler as a Swamp Cooler indeed, but the bucket would then be at the same level as the fermenter. Since the activity has died down significantly, I will remove the blow off tube today and switch back to a regular airlock. Then, I will be able to put the fermenter in a swamp cooler, hopefully that would help bring the temp down.

Thanks for the advice!

The fruity flavor of the Chinook most likely came from a high fermentation temperature.

How much of a budget do you have for brewing equipment? Some furniture from Goodwill to gain height, storage, swamp cooler equipment? Or unlimited and set up a keezer with temperature control for a fermentation chamber?

Well I am in the midst of starting my own Brewpub with my father. We are homebrewing mostly to get the gist of beer making and to obviously have a great time together and try our own beers. We will eventually have a comercial setup. As of now, I am content with the equipment i’ve purchased thus far. I do however want to get my hands on a false bottom mash container, but for now extract brewing will do. I think getting a swamp cooler might do the trick cause I cannot do much about the temperature here. Our record high temps go all the way to the 100s in degrees Fahrenheit so it’s a delicate situation.

You may need more than a swamp cooler if ambient temperature in your fermentation room is over about 78°. Ice can be used but then takes more attention to prevent temperature swings. Yeast can be pretty fussy. Changing temperatures can produce unintended flavors.

I started dabbling in brewing after I gave my Dad a beginners brewing kit. On one Canadian fishing trip Dad was reminiscing about working at the Medford brewery. Just mentioned he had thought about trying to brew some beer. We were doing some pretty good beers soon even with our primitive equipment.

So, where do you live then? You may need to use Kviek yeast… Snmeezles61