Just did my first outdoor boil

Just did my first outdoor five gallon full volume boil earlier this week and have already learned a few things and have a few questions as well. First and maybe most importantly, it was a very windy day as we had a storm blowing in and I kept having to spoon out little leaves from the boil. At one point i noticed there was a dead fly floating around in the kettle. As hard as i tried i just couldnt catch it quick enough to get it out. When a racked over to the fermentor I noticed little black pieces in the flowing through the tubing. I am wondering if this will have any impact on my finished product. I talked to the local home brew store and they believe I should be okay, and called this brew a hefeflizen (where my username comes from.) Secondly, how the heck to you keep said contaminates from ever falling into your kettle? The wind also kept me from maintaining a consistent boil. I was having to crank the heat up when the wind picked up and turn it down when the wind died. Do I just have to find a way to deal with this or should I try to make some kind of enclosure around the burner to keep the wind from it? I also learned that with the darkstar burner you do not need to have the heat all the way up to maintain a boil. I learned this the hard way when the wort boiled over when I added hops. Lots to learn from my first five gallon batch.

I agree, stuff falls into the kettle. It’s boiling, so I don’t worry so much.

I doubt the black bits were exoskeleton. Probably just random solids. A full boil will result in lots of “stuff” in your boil. Break, hop bits, caramelized wort, all sorts. It will all settle in your fermentor.

Do you have a garage? I boil in the garage with the door open, keeping wind and junk away for the most part. Barring that, I’d look for an inside corner, or a Lee S side of a fence or wall.

As for boilovers, you have the right idea. Turn down the gas and stir like crazy at hop additions.

Great thank you. I was kind of expecting to hear that. I live in a split level house so anywhere besides the upper deck and I am going to have to haul the wort up and down stairs so I think I will just suck it up and deal with the wind. As for the garage, well its more like a storage shed right now. I appreciate the help. I brewed on a Monday and it seems like fermentation has slowed down now. I thought it would last longer than my one gallon batches but I could be wrong. Anyways now I am just debating getting frozen fruit for secondary or to buy the puree that NB sells.

get a large cardboard box split it down the seam and use it to make a wind block around your brew kettle/burner. you can even get a sheet of plywood (or two) cut them down the middle, add a few hinges and use that to block the wind.

I try to watch the weather report and put off brewing untill a more favorable day. If I can’t, I use my truck and some plywood as a wind break. You could try some wire mesh to keep the leaves out. Just skim the flies.

I usually brew in my garage but sometimes the wind comes into play and interferes with a nice flame. To combat that issue, I built a little sheet metal shroud around the burner. See in picture below. 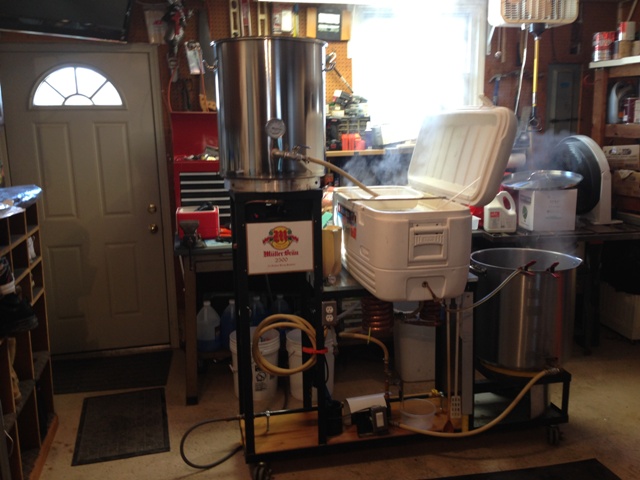 I wish I could boil in my garage but it’s full of junk at the moment and I don’t know how the stove top would handle a six gallon boil. Either way, I’ve already got the itch to brew again and improve from the last batch. I’ve got a bunch of new equipment that’s hardly broken in and begging to be used.

I think if my beer didn’t have random pine needles in it, I wouldn’t know what to do

You could get some bulk screen from a hardware store and make a piece to fit over your kettle. Just make sure it’s not plastic coated or vinyl.

You could get some bulk screen from a hardware store and make a piece to fit over your kettle. Just make sure it’s not plastic coated or vinyl.

I did think about that but wont some of the steam condense back into liquid and fall back into the kettle? I always though that you want to keep what boils off out of the kettle.

[quote=“tnelson2002”]You could get some bulk screen from a hardware store and make a piece to fit over your kettle. Just make sure it’s not plastic coated or vinyl.

I did think about that but wont some of the steam condense back into liquid and fall back into the kettle? I always though that you want to keep what boils off out of the kettle.[/quote]

Maybe a little does, I’ve used a screen once before when my cotton wood trees where dropping a lot of cotton. My boil off rate was the same as with out the screen so I think it’s pretty minimal. Better than a bunch of cotton seed or flies in my opinion.

Actually I’ve always been envious of you guys who brew outdoors/garage driveway types. I would if I could but being in my garage, which is slightly warmer than the 5th circle of Hell, for 5 to 6 hours is not an option…even our tap water is hot which makes chilling wort challenging. The tap water yesterday while cooling an English bitters was 86 degrees :shock:

Thankfully I can make my indoor situation with electric range work for 5 -6 gallon all grain batches in a 10 gallon kettle.
Sweltering in east central Florida.
Bob

[quote=“Voodoo donut”]Actually I’ve always been envious of you guys who brew outdoors/garage driveway types. I would if I could but being in my garage, which is slightly warmer than the 5th circle of Hell, for 5 to 6 hours is not an option…even our tap water is hot which makes chilling wort challenging. The tap water yesterday while cooling an English bitters was 86 degrees :shock:

Thankfully I can make my indoor situation with electric range work for 5 -6 gallon all grain batches in a 10 gallon kettle.
Sweltering in east central Florida.
Bob[/quote]

Well, with the wind we have here in around this time in NM I myself am envious of those who can brew indoors or in a garage. Mine is currently full of junk. I also dont feel like hauling things up and down the stairs of our split level home. I think a mesh screen wouldnt be a bad idea. It would save me from slaving of the kettle with a spoon trying to catch a stupid fly every time it bubbles up to the top. I do miss the smell of brew day in the house though.

Speaking of weather, Father’s Day I ended up getting caught in a rainstorm and ended up under a big table unbrella with my pots and lawn chair. It was cramped but cozy. I’ve since got an easy up , now after reading these posts I think maybe I will invest in a wind screen for it.

Garage/deck brewer here also. If I brew on my deck I bring a pizza screen to put on the top of the kettle(i think it is aluminum). It’s a fine enough mesh that most stuff won’t get in. i have quite a few trees in the backyard and use it just to be safe. Also, on a deck brew day I use a piece of plywood to shield the burner if it is windy. :cheers:

I have a patio that never got used until I bought one of these:

It’s a screen gazebo that also has solid canvas panel walls as an option. I am really looking forward to trying a brew inside of there. It’s large enough to accommodate all my stuff, and not be a fire hazard, and it will keep all the flying insects and plant matter out of my brew. I think also that as the weather gets colder in the fall it will be a warm zone since I think that some of the heat from the burner will stay inside the house.

I’m not suggesting that anyone go out and buy a $500 screen house for their brewing purposes, but if you wee considering getting one this is another positive point to help make the decision.

I have to admit it gets hot under my ez up. And that is without the windshield . I plan on only screening one side.

I’m in Florida too and outdoor brewing in August is rough…but always worth it. I bought a 25’ piece of copper tubing and made a “pre-chiller” for my wort chiller. It fits into a 5 gallon round Igloo water cooler. Fill it with ice and some water then you have near freezing water entering your wort chiller instead of 86 degrees from your tap. Accelerates the chilling dramatically too.