Is this the start of a pellicle?

Hi, I just started my first home-brew a few weeks ago and I have a question. I started my primary fermentation of Chinook IPA on Jan. 5th and transferred to secondary fermentation Jan. 13th. About 2 days later I noticed some small white spots on the surface of the beer. Does this look like the start of an infection/pellicle or just leftover yeast from the transfer from primary? I did have a little trouble keeping air out of my autosiphon, but I kept everything very clean throughout the whole home-brew process. Or am I just worrying over nothing? These pictures were from today Jan. 17th. Thanks. 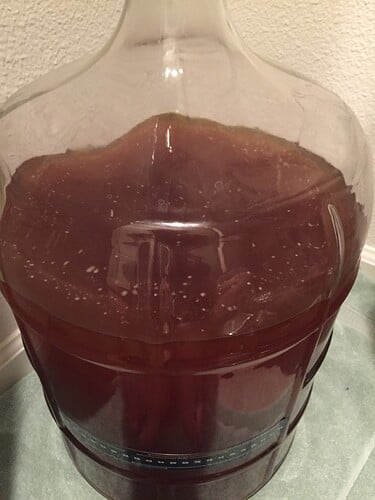 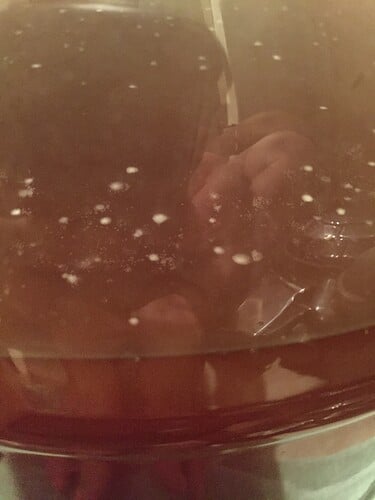 Can’t say one way or another. The white dots are just to small to make out well. The dots would be very fuzzy if it were the beginning of a pellicle. Yeast particles would be chunky with a thick irregular edge.

There has been a few posts tonight from brewers saying they have racked to a secondary vessel. Most if not all instructions say transfer to a secondary vessel, but in most cases it is not necessary. Usually a secondary is used when additions like fruit or oak cubes will be added. Dry hopping in the primary is also very effective.

When a secondary is used the brewer will try to minimize the amount of surface area exposed to the air to prevent oxidation of the beer. This would mean five gallons of beer in a five gallon carboy so the level of the beer is up to the neck.

Let the beer go for a few days to see if the size of these dots begin to grow in diameter. Hopefully they do not.

Hope this does not sound like preaching. Welcome to the forum and brewing.

Hopefully, they’re just spots of foam from CO2 coming out of solution.

As @flars said, it’s too hard to see in the pictures. I’d still lay odds you’re OK though.

First off let me say I’m a proponent of secondary. When I first started doing 10gal batches I would use 2 carboys. I decided once to move one carboy to secondary and left the other in primary. The secondary one cleared quicker and much better. Plus, the more trub I can leave behind means less in the keg.
Try it both ways and see what works for you.

But that is an awful lot of headspace fir a secondary. Although you might have limited O2 uptake during racking, that headspace is full of O2. You can combat this by using a 5gal carboy, as @flars said, or, by shooting CO2 into the fermenter by placing the tube in the bottom. This won’t scavenge all the O2 but it will scavenge most.

As for your fermenter. That looks to be yeast/CO2 coming out of the beer since you racked it. Hard to tell from that pic though.

In my experience, that’s not how pellicles start. They begin as more of a thin film that build up over time.