I have 5 gallons of infected beer, give some advice!

So, I made a 20 gallon batch of traditional English bitter, that I split into 4 carboys. All of the carboys turned out fine, except one that clearly has a bacterial pellicle growing on it - check out the picture. So, okay, I have tasted this beer, and so far, it tastes ENTIRELY NORMAL. What do you guys think I should do? I believe I have 3 basic choices: 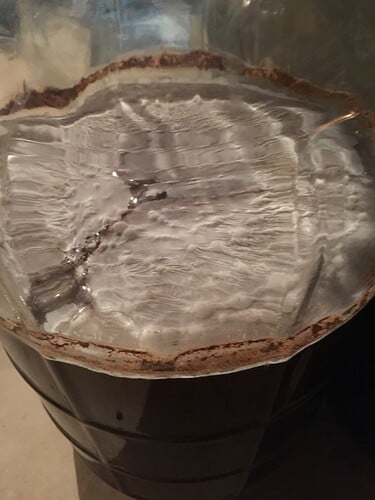 Toss out option #2, the infection is spread throughout your beer. The pellicle is just what the yeast or bacteria do when they contact oxygen on the surface. It’s like saying yeast are only on the top of your beer because that’s where the Krausen is.

How many ibu is the beer? If you’re over 30, it’s probably not lactic acid bacteria. Your choices are to bottle and drink it fast, as wild yeasts can over-attenuate and lead to bottle bombs, or let it sit until gravity is stable over at least a month, which could take upwards of 6 months. Bleach is effective at killing whatever is on the equipment, so I wouldn’t dump it.

Or you could use this as an excuse to dedicate this equipment for sour or brett beers. Siphon, bottle bucket, bottling wand… not that expensive to buy them again, and they should eventually get replaced anyways. Stopper, airlock… just dedicate this carboy for other microbes in secondary, and you won’t contaminate your primary fermentor.

This is a low IBU beer - probably around 20. Hard to say, but I have always had an issue with coming in low with my bitterness, and this is not a particularly high-IBU recipe in the first place. I didn’t consider that this might be a yeast infection, I thought that sort of pellicle always indicated bacteria. Either way, I think I am just going to let it ride. Either I get decent but unintended flavor out of it, or it goes down the drain.

Brettanomyces/dekkera is a wild yeast - just a different genus than saccharomyces. And way more complicated genetically, which is why it can be so weird. Even sacch can make a pellicle, although it’s been surpressed in brewer’s yeast.

Either way, I think you’ve got a good attitude about this. I would absolutely let it ride, but just make sure you wait for it to be done attenuating. Bottle bombs are a real risk, so give it plenty of time. Or embrace the infection, and pitch a brett culture. Clausenii/anomala is usually pretty tame and won’t get too weird on you.

Another thing that occurred to me last night… the others could certainly be infected as well, but may not be showing a pellicle if they didn’t get any oxygen in the carboy. Do they have as much headspace as the one in the photo?

I have made 1 or 2 batches with wild yeast (looks the same fermenting) but it really taste different.
i have never seen the pic above. My advice, call it a loss and dump it.