So brewed for the second time on my clawhammer setup but I’m having an issue with clogging. This time I used the plate chiller and recirculated back into the kettle like last time. I put the hose into the hop spider and put 1 oz of Azacca hops in at flame out (2 oz total in recipe). The hop spider started to overflow. Then I noticed the flow slowed down considerably and the recirculated wort was fairly cold but at a very slow rate. The cigar style strainer on the kettle clogged up.

So I’m not 100% but maybe just the over flowing hop spider caused it to clog. I guess next time I’ll just put the return hose into the kettle and not the strainer.

Also since I’ve never had a pump before I had it go through the pump then into the wort chiller. I assume this is the correct way and not into the chiller then through the pump. I think people gravity feed their plate chiller so I don’t see why it wouldn’t work like that but it didn’t sound right.

Any thoughts or tips? It’s not even like it was a super hoppy beer just a Azacca single hopped pale ale.

If I understand you correctly, you had wort with hops going through your pump and chiller? If so, you should recirculate into the hop spider first to collect hop material, and then when the wort is relatively free of hop material pump through the plate chiller. I have a similar setup and the plate chiller can clog easily with hop material.

My setup is kettle > pump > chiller. I had a hop bag come open in the boil once and it clogged my chiller pretty badly. I just reversed the flow and pumped it back into the hops bag to clear it out. Then after the berw day was done I ran boiling PBW through in both directions.

A strainer may have saved me a little aggravation that day but I rely on my paint strainer bags or now a SS mesh spider for containing hops material.

At first I thought it was the chiller and thought about switching flow but didn’t want to make a mess. Then I realized the strainer on the kettle output was clogged. I did get a bit of hop chunks out of the chiller when cleaning it. I have some hop bags that I bought with my brew bag and only used for dry hopping. I will probably start using bags now in the boil.

I didn’t think the hop basket would clog as fast as it did. I had to pull it out and pour the wort into the kettle because it wasn’t draining.

Super fine mesh will clog pretty quickly. This is why I have been a proponent of whirlpooling and picking up wort of the side of the kettle. You’ll still pick up a little trub, but just enough for yeast health and not enough to clog your chiller.

I have my recirc into the kettle… Going into the the hop back/spider does clog up the screen and as you found out… Fills up and won’t drain… I’ve been using a spoon to scrape the sides… My basket is big enough I can scrape the sides with my mash paddle… This is about the biggest down fall to our smaller home brewing equipment… The big shooters don’t worry as their bigger hoses and such let the hops pass right through…
Loopie has it understood… And having a trub ring is another idea to tinker with.
Sneezles61

After a few uses of the stainless mesh hop back, I think I really prefer the paint strainer bags I used for years. They billow around in the boil and I feel like they probably have better flow of liquid through them than the hop back does.

I agree. I felt I never got a ‘true’ boil inside the SS filter. You can compensate by increasing hops by 10% or you can just use the hop bags. They’re easier to clean. Rinse them out and throw them into the washing machine.

Thinking about getting one of these since I can really add anything permanent high on the kettle since the grain basket would hit it. Then swap out the bazooka screen for a 90 degree dip tube? Then bag all my hops.
I was checking out the exchillerator hangover bracket to add a whirlpool arm but it’s over $100. This spincycle overboard on brew hardware is around $35 if I add a welded QD fitting on the end. Thinking if I whirlpool for a few minutes before sending it through the chiller that might work without a filter if I’m bagging hops. 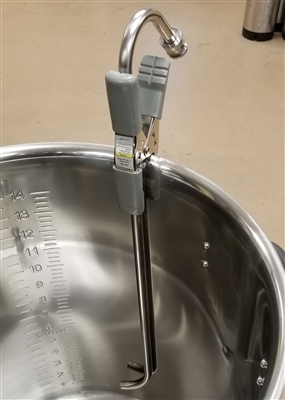