My question is about hop utilization. First to frame my question.
My current process is to toss pellet hops, up to 2 ounces so far, directly into my Keggle during the boil or hop stand…I’m calling this free-range (not sure of the correct terminology); the pellets are in the wort completely so this is the best-case hop utilization possible. At the end of the boil or hop stand I recirculate and at the return port at the top of my Keggle I “catch” the hop trub with a 400 micron basket as shown in the picture. This basket I’m holding is a temporary one until I decide if and what to buy for long term use, something I would not have to hold in place. After I remove the hop trub with the 400 micron filter I can cool the wort through my plate chiller for the hop stand or down to fermentation temperature. I catch hop trub like this for about 5 minutes, which has been enough to not clog the plate chiller. So far this has worked well but I think eventually I am going to clog that chiller. I plan to do hop stands with large quantities of hop pellets, possibly up to 10 ounces, which might clog my pump and plumbing as well, which is 3/8" ID. My question is - If I use a hop filter in the Keggle, during the boil and during the hop stand, to contain my hops so that the hop material is always inside the hop filter and never in the plumbing or pump, how much will that detract from hop utilization? I plan on a large diameter SS hop filter (10 inches) with a 400 micron mesh. This diameter is selected on a hunch that “the bigger the better”. Has anyone done this and what was your experience with hop utilization? What diameter and mesh size was your hop filter? Thanks for your patience if you read all this, and any experience you have had with this would be of interest to me. Cheers! 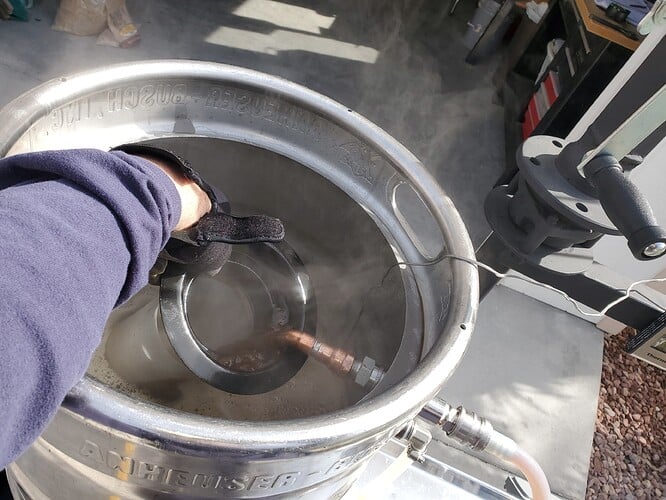 Free range in the fermenter/boil then muslin hop sack in the keg. I’ve heard from some on the forum that the hop spiders, etc reduce availabiliy/ utilization but slightly increasing hop amounts may make up the difference…5%? 10?

I started this thread, however after some more research I found this ExBEERiment, a controlled experiment comparing 2 beers made identically except one used a hop spider to contain the hops and the other was free range - hops added directly to the boil.

Author: Brian Hall “Free range” has taken the food world by storm, but hops are one ingredient that might not benefit from the free-range treatment. Brewers making IPA often add massive amounts of …

The result of the experiment was _’….participants in this xBmt were unable to reliably distinguish a hoppy Pale Ale made with the kettle hops added to a hop spider from one where the hops are added directly to the boiling wort.’_After reading the results of this I am inclined to employ a SS hop spider in the future to keep pellet hop trub out of my plumbing, pump, and chiller entirely.

HOWEVER…I wonder if the same result would occur for a beer recipe with less hops, in other words, is it possible the overt hoppiness of this beer made it hard to tell the difference between the two? Would a difference be more detectable in a less hoppy brew?

The brulosophy gang do good work. You could be right, at some point in uber hoppy beers there is likely some IBU overkill for the taste buds. Anyway a small adjustment upward in hop totals seems like good insurance for the less hoppy home brew.
My setup is notable for its primitive nature. I don’t even strain the wort after the boil. There is very little to “clog” so I understand your concern with your substantial setup…

I use a pump and plate chiller in my setup so I’ve used paint strainer bags to contain hops in the boil for years. I recently tried a hop filter basket that looks very similar to the one in your picture. It worked fine but I was concerned about utilization when it began to fill on a boil that required 8+ oz of hops.

I’ve decided I’ll use it for beers that get smaller quantities of hops and probably supplement it with a bag in higher IBU beers. I like the way the 5 gal paint strainer bags billow around in the boil. Gives me a sense that the hops are getting more contact with the fluid.

Because it’s been a fixture in my system for so long it’s hard for me to say how much I’ve adjusted my hops for it.

Thanks Dannyboy. That basket in my picture is NB’s Depth Charge for dry hopping, and I used it as a hop filter only because I already had it, and I don’t know what I want long term yet. During my brewing day it began to fill as yours did, and I had to scrape down the sides to get it to empty the wort fast enough. I am considering getting a large hop basket, as large as I can afford…(maybe a second hand one)…with a volume that is a significant percentage of my boil Keggle. Seems to me that would increase hop utilization through higher exposure of hops to wort. I would double up and use my grain basket (12" diameter) as a hop basket, but the mesh is 800 microns, and I’m thinking that would let too much hop material pass through. Thoughts?

Think about this… If you free range, there are bigger hop particles that will do as it may… Now, if it’s through a screen, the large particles are contained… the finer particles do pass through… Pump clogging? As long as it’s mixed well in the wort… I doubt it… Does that make sense?
Sneezles61

Yes that makes sense. I think I am going to use a large hop basket, at least 10 inches in diameter with 400 micron mesh. Finer particles will pass through, but not enough to clog my pump. I’ve already demonstrated that works with my first brew using the 400 micron basket I mentioned.

Perhaps something to scrape the sides of the basket… Cake frosting knife?

Last time I used a big spoon (my mash stirrer). Worked OK. Only clogged once but I dumped it twice during the filtering process.

The tester did stir his hops in the spider during the process.

Yes he did stir the hops in the spider, and I do too because if I don’t the spider can clog and over run. In fact it did once. My spider is a temporary one that is only about 6" in diameter, and I want one much larger…as large as I can get without breaking my wallet. I think that will help with both utilization and less clogging. I am currently looking for a used 400 micron basket with at least 10 inch diameter and 400 micron screen.