First timer here. I got the Slobber 1Gallon Starter package. Everything went good yesterday with the first process. I woke this morning and I found that the water in my airlock is now brown color (obviously from the Slobber coming up). It is bubbling but I am pretty sure this is not right.

I would appreciate ideas on what my next step would be from here. It is less than 24 hrs for this to roll. It is in my hallway closet and the temp is about 68 degrees.

I will add a picture to show you what I see.

I only have the stuff that came in the starter package and extremely limited knowledge. I was trying to browse thru other forum posts and got lost on acronyms and things I didn’t understand yet, so plain speak would be appreciated.

Thanks so much,
Jason 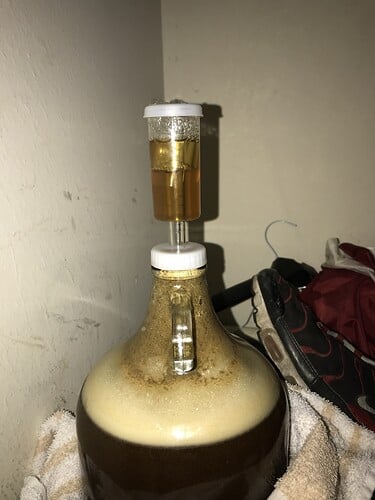 The foam from the beer pushed up into the airlock, which is why it’s brown. 68°F is a bit too warm, so you might want to lower it to the low 60’s to keep this from happening. The higher the temp, the more active the fermentation.

Pull the airlock, cover it with some aluminum foil while you clean it. If you don’t have any sanitizer, some weak bleach water will work in a pinch. Once everything is cleaned and re-sanitized, replace the airlock. After 24 hours or so, it should settle down.

That is the classic “not enough head space”. It is hard to get sufficient head space for one gallon of beer in a one gallon jug. Your picture shows some hop debris coming up with the krausen. This has the potential for plugging the air lock and blowing it off. The blow off can mess up what is nearby.

For the short term pull the airlock and stopper. Replace it with a aluminum foil cap that is well sanitized. Krausen which continues out of the fermentor will just flow down the side of the jug. Place the fermentor in a tub or bucket to contain the spill.

Clean the air lock assembly and rig a blow off tube. That is if you have the tubing on hand. If you don’t have tubing the foil will be good until the krausen begins dropping in a day or two. Then replace the cleaned and sanitized airlock and bung.

This is how to assemble a blow off tube with your three piece airlock. 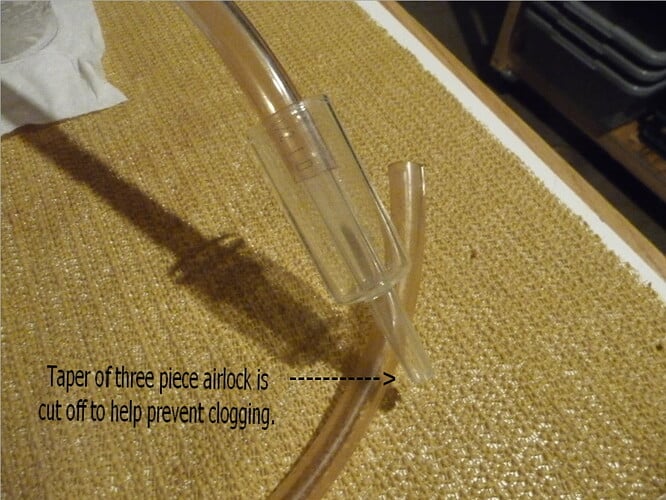 Fermentation produces heat. The warmer the fermenting beer is the greater the activity of the yeast will be. Your beer was probably fermenting 2°F higher than the ambient. With the ambient at 68° your just near the high end of the range for most ale yeasts. No off flavors from a too hot fermentation. Starting with the fermentor in a tote or tub with water will drain off some of the heat produced and keep the fermentation temperature close to to ambient.

Before your next brew we can offer more advice on temperature control.

Flars–Thanks so much for the advice and the picture to help. I will get to work on it.

Porkchop–thanks so much. im on it

So here is my set up, from the advice given to me. I moved to a cooler place and I have the siphon on an airlock and to a mason jar filled with water. Is this good? 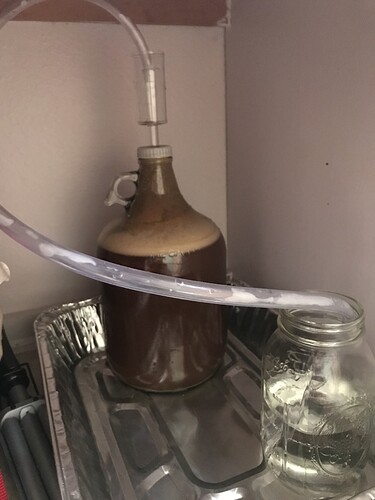 Perfect! Just make sure you keep it dark.

Looks good. I would place the blow off jar a little lower than the fermentor for the next brew to prevent the possibility of suck back if the temperature would drop drastically. Since the room is at an ambient of 68°F this would be probably be unlikely though. Having Star San solution in the jar would be better than water in case there is some suck back. A little Star San may dilute a beer but it won’t carry contaminants or produce off flavors if the water would have chlorine or chloramine in it.

Water is sanitized but I will lift the fermentor up a bit more. Thanks

At cold crashing… Find a way to remove all the liquid from the locker, put a foam stopper to “filter” the air getting pulled back into the fermenter.Once all is a ambient temp… replace the blow off/air locker… Sneezles61