I’m probably just being paranoid, but I assume the stuff floating around is the yeast having a party eating up the sugars?.. This is also 27 hrs after pitching the yeast. 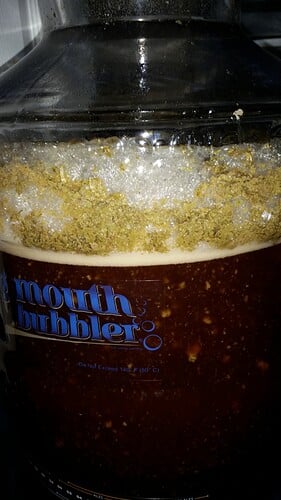 Seriously, though, I think that’s just some residual starsan foam, krausen, and hops. Looks good to me.

I did my sanitizing when i started steeping the grains. Was totally dry by the time I was done with everything. thats all krausen.

And to clarify, I meen the white stuff under the krausen swimming in the beer.

Looks fine. All is well. Carry on.

That Hop debris tends to have the most shock value; its green, and just looks wrong. So until you’re used to what it looks like, it tends to get mistaken for something nasty. Your picture looks fine.

That is the yeast having a good time. I got the same thing in one of my beers looks like a volcano sometimes. Looks like you have a good formation going, looking good.

What yeast are you using?

Yeah, looks good. You are keeping it in the dark though?

yeah, shades are always drawn, and im using the box the bubbler came in as a cover, cut a hole in the top for the airlock.