Someone overheard me discussing homebrewing at lunch the other day and told me that their brewing friend gets his water from the old Hamms site. I usually get my water from the pay well at the former Landmark/Schmidt site. I found one old post on searching that the Hamms well has been shut down for years. Was this person just passing along really old info or is it possible the well is still operational. She was convinced her friend preferred this water - and mentioned it was free.

Sorry if this has been discussed before. My 15 minutes of “google-fu” didn’t net results.

I think she may be simply misunderstanding the supply source. I am guessing she is actually referring to the Schmidt well being the source her friend uses.

I have researched this stuff in detail and the last facts I found lead me to believe the Hamm’s well along with the other commercial/industrial uses to the supply well were all capped back with the clean water act back in the early 1980’s. It seems as though Schmidt is one of only a handful of businesses that have access to the well to this day as most of the access is by municipalities only.

The Schmidt water is drawn from a well lying 1000ft deep. The Hamm’s if still operational to this day would be drawing from the same source well which is called the Mt. Simon-Hinckley aquifer
Which while being pristine water it is very hard in nature and the mash will need manipulation/acidulation to agree with this hard water if brewing light SRM beers. If brewing extract your fine and you can add a touch of gypsum to the boil for hoppier beers.

Here is the Link to a post I commented in a while ago showing the current mineral report I obtained from ward labs from a sample taken at the vending machine when it was turned back on in 2010.

Upon looking for even more detail tonight I found this info which shows mineral reports from 1990
Table 7. Analyses of water from the Mt. Simon-Hinckley aquifer (continued)

Also If someone has facts regarding access to Hamm’s and the free deal “she” is quoted as saying by the OP above I would be interested to hear about it also as I drive by the old Hamms grounds on a weekly basis.

Wow. They could bottle the water and still make a bundle. “From the Land of Sky Blue Waters…” 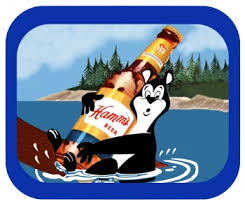 Thanks for the detailed input! I too had found comments on the web stating the Hamm’s well being capped. It does seem logical that both breweries would tap the same aquifer.

Are you referring to the place on West Seventh Street? You have to pay for that one right?

Are you referring to the place on West Seventh Street? You have to pay for that one right?

I buy my water bottles with handles from Eco Water they sell me there competitors jugs for $5 ea what a deal.

FYI - the gentleman that runs the well house told me that during December he’s going to be giving away 5 gallon jugs and having a free Saturday. He wouldn’t specify which weekend (jugs and free water will be different weekends) so we’ll have to watch the marquee sign.

FYI - the gentleman that runs the well house told me that during December he’s going to be giving away 5 gallon jugs and having a free Saturday. He wouldn’t specify which weekend (jugs and free water will be different weekends) so we’ll have to watch the marquee sign.

If it’s the same guy I talked to he is the old brew master said he had been there for 30 or 40 years he gave me a coupon for free 5 gallons and also the water test report dated 5/14/12.

Said the they were going to open a small brewery next spring but didn’t say where they just started converting the old brewery into condos.

My son lives in Milwaukee and his office is in the old Schlitz brewery.

Also if anybody wants to report back on the days or such that would be valuable to many.
I dont often get down that way to see the sign and I use St Paul utility on a regular basis. But free changes things mucho. Makes me think of the old days when both Breweries pumped it to taps that were free for all to use. I can remember going to the Hamm’s brewery and filling up 5 gallon jugs with my Parents in the late Seventies. 8)

It’s only a point or to different than the one you had done with Ward labs pH was 8 and the TDS was 256 is the only difference that I see.

The report also has more wells that are dated 5/14/12 on it Coon Rapids, Hopkins, Minneapolis, Bloomington, St. Paul and Oakdale.

If you go there look for him and he will give you a copy.