Hello I recently purchased the $99.00 starter kit as I was going through all of my equipment my cap for the airlock was misplaced I went ahead and started my first batch od block party amber ale. Do I need the cap for my airlock or cap I continue the process without the cap?

You don’t need the cap.

Assuming it’s a 1-piece airlock, you don’t NEED the cap. If you can find it though use it. It keeps dust and bugs out of the airlock, and marginally slows evaporation of the sanitizer in the airlock. Definitely add a couple to your next order

If you see something in the airlock, it’s ok to pull the airlock, rinse it out and refill it with fresh sanitizer or cheap liquor. 5 or 10 minutes without the airlock is no problem. Star san will get cloudy as it ages, so that’s not what I’m talking about. In my house it’s effing ants that get into everything not protected. There is a chance of some suck-back once the beer starts to cool down.

Hello,
I made my first beer batch 3 days ago. I kept it in a dark place and decided to take a look at it. This is how I found it, and was wondering if this was normal. If not where did I go wrong and is it possible to save the batch or is it completely ruined?
Thank you for your help!
Jennica 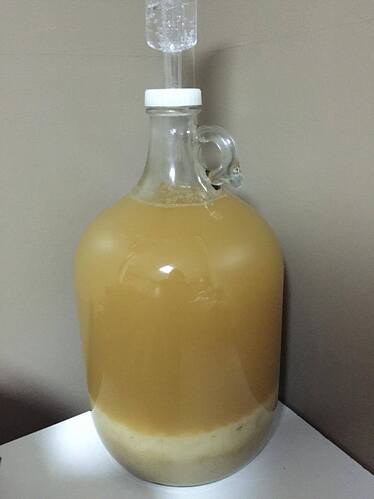 For three days, this looks fine to me. Give it time, and it will finish and drop clear. I usually don’t even think about touching a beer until three weeks in primary.

For 3-days old, I would actually expect more krausen on top. (Looks like a cross between pond scum and meringue.) It might have been a bit warmer than optimal; but probably OK. Most beers ferment best 60-65F. Other than that it looks great. No worries.

The general haze is yeast still in suspension because it’s still working. The trub at the bottom is proteins, and hops and, and yeast that has come out of suspension; all normal. The beer will clear in the next 10 days or so. And be ready for bottling a week or two after that.