I am just tapping a no boil kettle soured beer that I brewed a couple of months ago. The beer is fine for a first attempt. Since I have never brewed a no boil beer nor a kettle sour their is only one characteristic of the beer that surprised me. the calculated color in Beersmith put the beer around 2.9 SRM. In reality the color is something different than that sorta like a light brown orange copper color and looks a lot darker than what I would have expected. This isn’t a problem for me but wondering if this is an effect of the no boil? Or if anyone else has had similar experience. Just to avoid the unnecessary the recipe was 2row, wheat malt, and acidulated malt.

Ran off approximately 8 gallons wort into my 10 gallon kettle the same way I have been for the past 15 years or so. Brought to 190F and held for 10 minutes. cooled to 110F and pitched 3000ml active starter of WY#5335.then purged headspace with CO2 and sealed lid with peri film. After that tried to keep the temp of kettle between 90F-100F. let sour for 2 days(approx 48hours) the measured pH was around 3.5. then ran off into a carboy and pitched 2 packs of T58. Fermented at 68F and hit terminal gravity in 3 days. Aged for 8 weeks then dryhopped with 2 oz of experimental 5256.

I am relatively comfortable with my process I think I got the idea from a Wyeast ppt I saw somewhere. My curiosity really is just around the no boil method and what happens when you dont boil.

With no boil, you should end up with a very light beer, so clearly something went wrong with it.

I think you have a good process, but some tweaks could help. The obvious cause of color change is oxidation, but I don’t think that is your issue. Rather, some other microbe crept in there before you racked to your carboy.

It’s not very well understood, but a color change can happen with a mixed fermentation sour. But it takes more than just lacto and sacch for this to actually happen. I’ve seen a sour beer turn from pale yellow to purple fairly quickly after oxygen exposure, so I suspect that is what might have happen. Oddly enough, they often change back to their original color after some weeks! Not sure what microbe can cause it, though.

I try to pasteurize at 170°F for a raw ale, to prevent DMS. Also, if you drop your pH to 4.5 prior to pitching lacto, that improves head retention and stops a lot of the spoilage microbes responsible for butyric acid and other off flavors dead in their tracks.

Since you’re not boiling after souring, I would suggest a different lacto than 5335. Lacto plantarum, available from omega labs (oyl-605), or the yeast bay, good belly probiotic juice, and swanson’s probiotic tablets will sour your beer within 24 hours at room temperature. Pasteurize, chill to 100°F, run off into your carboys, and pitch the lacto starter. Let it fall to room temp, bang, you’re ready to pitch yeast the next day.

These kinds of beers are a lot of fun - you can be drinking them in as little as 2 weeks! Couple of tweaks and I think you’ll nail it in no time.

Raw grapefruit gose fermenting right now with us-05. It was actually a lot lighter before adding the grapefruit juice and zest. 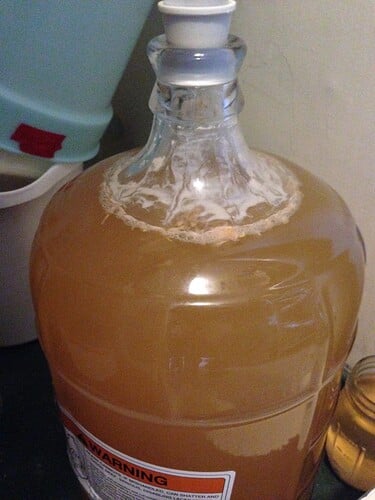 this beer was more or less just to try something different, specifically a no boil no kettle hop beer. If I brew another one I think I am going to go with the Good Belly culture it sounds like a good lacto source and sounds like alot of people are having success with it. As for head retention surprisingly that isnt an issue, it holds better than some of the kettle sours I have had at some local breweries, so I could have gotten lucky there.

I am liking the dry hopped sour taste for me that was more of a positive than the slight off color.

Love dry hopped kettle sours! The one above is going to get a couple ounces cascade once the yeast drops.

that actually looks like the color of what I brewed. I am actually moving onto a couple of rounds of bitter for summer. then might revisit this style later in the summer.

This might show the color a little better… This is typical of what I get from no boil. 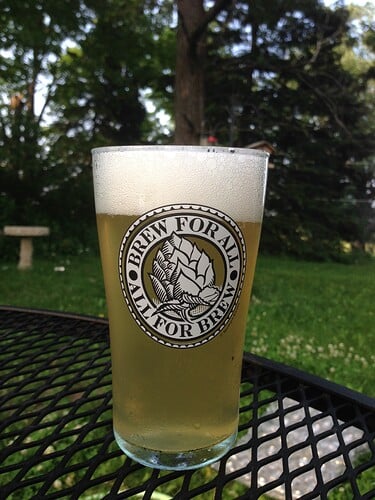 me been reading this post several times now confused i am no boil?

me been reading this post several times now confused i am no boil?

Right, a no-boil beer is literally one that is not boiled, or boiled just briefly to kill off any microbes living in it. I pasteurize the wort at 170F for 15 minutes or so, then chill and pitch bugs. They’re typically sour beers, so the sweetness of the unhopped wort is balanced by lactic acid versus bitterness of hops. However, you can certainly add whirlpool hops at pasteurization temperatures to get some IBU and huge amounts of hop flavor.

Interesting… Let me know how that turns out.