Yesterday, I had some time and I brewed up a double batch of the one gallon Hefeweizen kit. This is only the second time I’ve been able to brew in the last 13 months since my son was born, so I figured it would be a good way to ease back into it and remember all the things I’ve forgotten (like what gear I needed to pull out, sanitizing stuff, and all that other stuff you don’t think about). I was going to just do one gallon, but figured if I’m already committing my time and energy, why not double up? And because its a lot of work for just 10 bottles, so 20 for the same amount of work and I already have the jugs. Call it a practice run before I do my partial Speckled Heffer.

Was going to do it inside, but it was so nice outside, I went ahead and fired up the burner. Everything went well, no problems. Got it all done in just over 2 hours, but I know I it was because I was rusty. Split the wort into two gallon jugs and then dry pitched the yeast. Put it in a cooler in my guest bedroom with a little bit of the water and some ice from my ice batch. Checked it later last night and it was down to 51 degrees, so I took it out of the water and just left it on the floor, figuring it would be fine since we leave the heat off in that room. Got worried later about dry pitching the yeast, but Googled it. Some said that’s ok to do, some said not to, but at that point it was too late. Fingers crossed.

Got up this morning to check on it, temps around 63-64, fermenting along happily, so I’m relieved. Plan is to let it ferment 3-4 weeks, bottle it, forget about it for a month and then try.

Anyway, long story short, I’m not an idiot, I didn’t forget as much as I had feared and I should have beer soon that my wife and I will hopefully enjoy. Now lets see if I can post some pics. Haven’t done that before on this site. 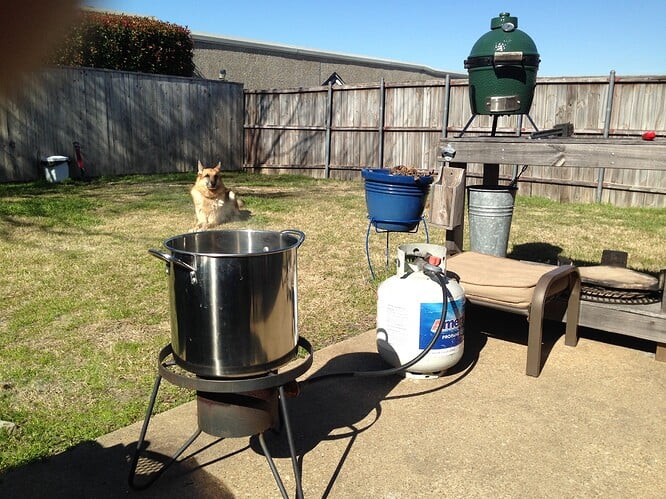 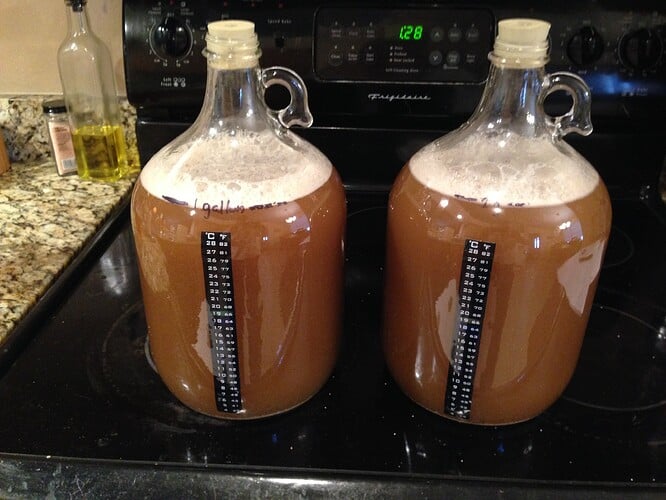 How did you get your dog to hover over your kettle like that??

My plan is on bottling day, to get my priming sugar ready and then combine both batches together and then bottle. Probably would have been better to use a bigger carboy, but I didn’t want to spend the money and I had a feeling there would be too much headspace in a 5 gallon one.

Funny, it kinda looks like he is. He was just hangin out enjoying the sunshine and 65 degree weather.

Where is the snow??

You may only need a water bath for your fermentors to prevent stressing the yeast from temperature fluctuations.

Picture was taken before installing air locks or blow off tubes?

We haven’t seen any snow in Dallas this year. Pretty sad.

I was trying out the water bath. I think it will help in the summer, but that room is cold enough in the winter with the heat turned off.

Yeah, I put blow off tubes in them after I moved them from the kitchen to that bedroom. Depending on what it looks like when I get home today, I’ll put in the airlocks.