Didn't think I'd have this issue with a bucket. Looks like I'm wrong

Brewed an all grain APA yesterday. Shook the hell out of the bucket for 5 minutes and pitched a WLP001 2L starter around 2pm and the thing took off. I went to bed last night it was bubbling along. I woke up this morning and I couldn’t hear it bubbling so I took a look. Here’s what I found: 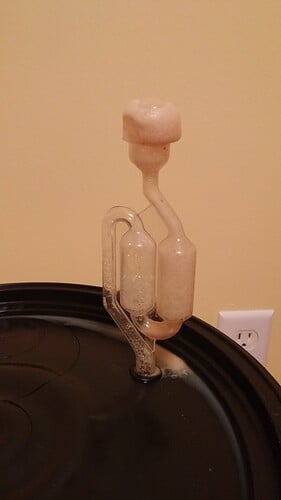 Do you have a blow off hose set up? Don’t know how that works with a bucket but I know guys do it. I use it with my carboys and it works like a charm. No worries about an explosion.

I have a small hose I think 5/16 but I’m not sure it would fit into the grommet on the lid.

Easiest way to hook up a blow off on a bucket is use a 3 piece airlock and slip a hose over the stem of the main body of the airlock. You could also just loosen up the lid and it will probably allow enough CO2 to escape that it minimizes the mess. 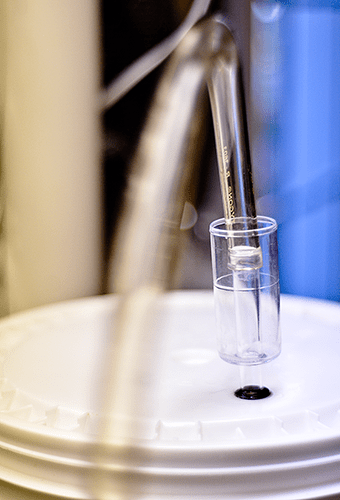 ^^^ This. Check the airlock to see if it has an X on the bottom of the tube. If it does, cut it off to prevent it from getting plugged with krausen.

You are controlling temperature right?

I remember seeing that done before but forgot about it. The optimum range is 68-73*. It’s sitting at 70* with an ambient temp around 68*. I’m not actively controlling it other than with the ambient temp which I know isn’t ideal. If I see it creep up I’ll have to do something. I have a fridge setup but it can only cool at the moment and it’s about 60* in the basement.

**I checked out my 3 piece airlock and the center section was too big for any of my tubing. So I grabbed some 3/8 tubing and it fit snugly into the grommet. 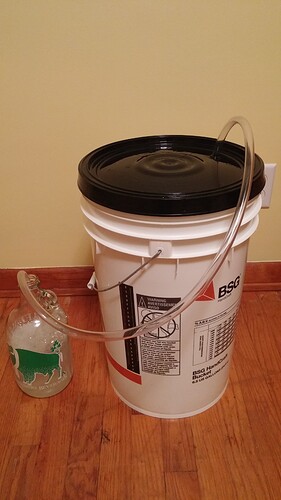 In general, 70*, although listed temps state otherwise, is a little warm for best practices during the initial 2 or three days of active fermentation. I’d set up a swamp cooler or get it down into the basement for the next couple days. For an APA I think a temp of 62* to 66* would be a good range for first 72 hours or so…Would definitely have reduced the chance for breaching the airlock.

Generally speaking I agree with @voodoo_donut but I’ve never used that yeast so I can’t say for sure how it performs at lower temps. My first reaction to your response on temp was yea, put it in the 60 degree basement. A quick google search and I found some posts suggesting people have used it down to 62 so that might be your best bet.

I agree 68 70 is way to warm. I used to do it and always used the blow off like @dannyboy58 showed. Since I started doing low and slow I havnt needed a BOT and the beers always ferment well.

Looks like a bucket lid sealed for a change

Swamp cooler was one of the best recommendations I got from the vets on this site… My fermenter sets around 62* now.
Just started drinking first batch of AG using the swamp cooler zero off flavors…

I had 2 separate Hefe batches blow the lid of my buckets. Both fermented in my cool basement before I had proper temperature control. I just left them with the lid half-open, leaning into my sink until the barfing settled down. Then I cleaned the buckets with star-San soaked paper towels, and reseated the lid and replaced the airlock. One of the batches turned out fine, the other was lousy, but due to badly thought-out fruit additions.