So over the weekend, I made my first 5 gallon all-grain recipe. I absolutely loved the process, using a mash tun and hot liquor tank… using a home made setup for an electric kettle (soon to be modified as well to make the boil less violent). It was a great time, and I can’t wait to do more!

However, cooling it down was a bear. Having 5 gallons (full boil) of very hot liquid, it still took me close to an hour to cool the wort down using an immersion chiller. I shudder to think how long it would have taken with an ice bath! I am thinking about upgrading the chilling portion of my brew equipment. I looked into the counterflow or plate chillers, but seem to be confused on the whole thing…

It looks like, basically, that the wort is fed in one port and comes out another. Inside, the wort is separated by plates, and inside those pockets, cold water is being fed through. So basically, it is a heat exchanger (just like an immersion chiller), but it allows more surface area than an immersion chiller, thus chilling it faster. However, even though it says you can gravity feed it, it is recommended that you use a pump. This is where my confusion lies.

I brew indoors, in my basement. I have a small kitchen area down there, and I have a hose-fitting adapter on the sink. I have no issues hooking up a hose to connect the water-in with the sink, and the water-out to the drain. But how would I gravity feed wort? Would I use an auto-siphon, similar to when I want to bottle? Are those made to withstand near-boiling temp wort? Does that even seem practical from a speed perspective?

Basically, TL;DR… I want to buy a counterflow or plate chiller, but don’t know how to use one. I also don’t want to have to spend $300-400 just because I need to buy a pump too, so avoiding a pump would be ideal. Any help is appreciated

Counter-flow chillers work great, and can be gravity fed, but you will probably get frustrated and ultimately buy a pump (which come with their own frustrations). Auto-siphons cannot handle near boiling wort temps.

Pre-pump days, I used to keep my kettle at counter top level, then used a step stool to hold the plate chiller (height right in between the kettle and the fermenter), then drain the wort out into the fermenter. I now run pumps and recirculate (whirlpool) while chilling.

I recommend a tube-in-tube counter flow chiller (Chillzilla, etc) over a plate chiller (Shirron; Therminator) primarily because plate chillers tend to clog if you’re not screening hops. That being said: I used my Shirron for years before I changed to a tube-in-tube style chiller. It is currently for sale if you’re interested.

I use a ladder for my three tier cooling setup. 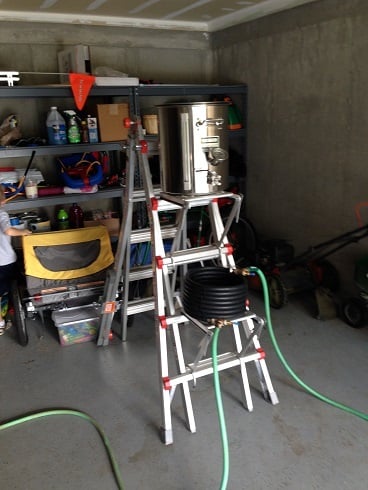 I lift the pot to the top of the ladder using a stepstool beside it so I don’t need to lift anything over my head. The carboy gets set on the ground below the chiller and I use 2 high temp hoses to connect things together. Simple and effective if you have a ladder. You can also fairly easily use a workbench or countertop as Voltron suggested. In the summer due to ground water temps I have to only open the valve on the kettle halfway and crank the hose as hard as it can handle. In the winter, I barely have to trickle the hose and can dump the kettle at full volume through the valve.

Where do u live and what immersion chiller are you using?

I live in Rhode Island, and I use the silver serpent. I also do not have a kettle that has a spigot/spout, so that is my confusion. I do, however, own a bottling bucket with a spigot on the bottom.

Can a bottling bucket handle near boiling temp water? I don’t want to warp/melt the bucket, nor do I want any chemicals to melt off and make it into the beer. I know my options are limited, but I am not in the market for a $300-400 purchase right now, so a plate chiller + pump is probably out of the question. I could also transfer the hot wort back into my hot liquor tank, which should be able to handle liquid at this temperature. It has a spigot on the front as well, so that could work with gravity feeding.

I also currently have a large freezer that I may be able to modify to get the space required, but I would still need to get the wort into a bucket of some sorts, as I do not want my electric kettle to be placed into a freezer. I could use the immersion chiller to lower the temp a little, then transfer to the bucket, then either place (covered) in the freezer for a short while, or use the plate chiller with a gravity feed. Preferrably, I would just like to transfer to the bucket quicker if possible.

With five gallon batches, you shouldn’t need much more than an immersion chiller. Gently stir the wort with the chiller every few minutes, and that will cut back the cooling time.

You will need to punch a hole and install a spigot on your boil kettle for gravity feeding. I wouldn’t recommend trying to dump 5+ gallons of near boiling wort into another vessel.

I use a counterflow chiller for 10 gallon batches. For 5 gallons I mostly use a 50’ immersion chiller works fine. You could recirculate ice water or make a prechiller

How can I circulate ice water? Wouldn’t that require a pump?

I also can’t submerge in an ice bath. Since it’s an electric kettle, I’m trying to not place the kettle into an ice bath. Though I would disconnect from power, still a bad practice to get electric equipment near water.

Like I said, I use an immersion chiller and it took me almost 60 minutes to drop to 68 degrees. As I said earlier, I could always use the chiller for 15 minutes or so, then transfer to a bucket once cooled down a little, then either use that bucket to gravity feed a plate chiller… or place that bucket into a freezer for some time. I use the fermenters favorite cooler for my hot liquor tank, so that should be better able to hold hot liquid. If I got it down to 170 or so (the temp of my hot liquor), then the cooler would work well, and it has a spigot for gravity feeding a plate chiller.

See this post for a recent discussion of a very fast chiller Jaded Hydra. I have no experience with it myself. Stirring the wort while chilling makes a big difference. If your cooling water running through the chiller is too warm, as it can be in summer, then you can use a 2nd wort chiller to cool it. Put the first chiller in a bucket full of ice water and the 2nd in the wort.

An example of a pre-chiller (google image search): 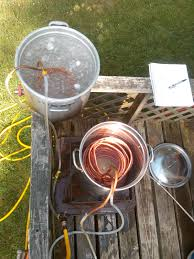 Another thing to do is to get the longest piece of copper flex tubing you want to afford, and bend your own immersion chiller. More copper tubing bent to contact more of the hot wort is going to significantly improve your chilling time. But yeah, those smaller stainless chillers are not very effective. Plus there are some benefits to having some copper in contact with the wort for yeast health.

We bought the Hydra and with our 55-ish groundwater it took 10 gallons to pitch in about 14 minutes. Very pleased with the step-change to our process.

You could use something like a cheap pond pump from the home improvement store to recirculate iced water… it doesnt need to be as robust as a pump moving boiling wort.

Yea I wish I had found that hydra cooler earlier, sounds pretty amazing. At this point, however, spending $160 for it wouldn’t fly either. If I had bought that instead of my original silver serpent, it woulda been much better. The original cooler cost me $75, add in whatever extra I will spend on the new solution, I woulda just been better buying the hydra originally.

I think I may buy a second immersion chiller and run it in an ice bucket as Steve and voltron said. I can find a cheap one for about 30 bucks plus about 20 worth of accessories and parts. I can stomach (i.e. my wife won’t yell) at $50. It may not work amazingly, definitely not as good as other options, but up until 2 brews ago I was using ice baths, so anything is better than that… and that was for at least 15 brews. I don’t need perfection, just don’t want to sit there for an hour, wasting time and water.

With you on that!

Another simple thing is chill till you get cold break and pitch in the morning.

After it cools a bit transfer to a bucket or something and put that in an ice bath and continue using you IC.

I’m curious how handy are, or, willing to be? Some of the fun part of being a home brewer is modifying things to make do… Putting a hole in your kettle and a weld-less fitting … Even building your own chiller… Parallel counter flow chiller… That would be a great project, and will work good with gravity… Easy to clean… I’d like to think you can start simple… enjoy your home brew while looking at your equipment, measuring… figure out a stacked brew sculpture? Keep asking us! We all started quite simple too! Sneezles61

Your easiest method is to use a pre-chiller. FIRST, use your regular chiller to about 100° then use your prec-chiller to knock it down the rest of the way.

Your cheapest (likely) is to buy a cheap utility pump and recirculate ice water once you reach 100°. I bought one for about $40. This was the method I used prior to my glycol fermentation system. All you need is a bucket, ice, pump, and connections to your IC.

One thing about CFCs or plate chillers. Much more cleaning than simply spraying down an IC.