Looking for opinions on this… Thoughts? 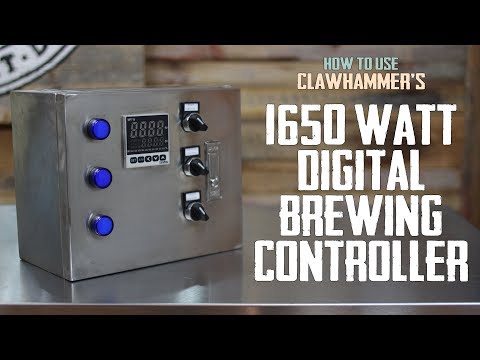 Well, thats a fancy gizmo there… If your going with electric, then do step up to 220 volt, 5500 watts… If you need horse power you’ve got it… if you don’t, you can just kinda coast along… lower voltage supply will take longer to get to mash temp and boil… The binford motto… ho-ho, horse power… aaauu! Sneezles61

I have been studying electric brewing for a while now… I just don’t have the space or money or electrical service to do a 220 setup… I know this’ll work… yes, It’ll take longer to brew… But at $850 shipped… Turn key operation… Maybe its worth the trade off? Sure beats the hell out of a $5,000 dollar system… Not to mention the addition needed on my house for a three kettle system…LOL

Me building a new brew system. As well. Got all my parts ordered. But now me in doubt. Should i switch from propane. To electric. My new system still propane. But last week wanted to buy propane gass. They had no small gas bottles. No big deal at that moment still could brew last weekend. But for the last months. Doing research on brew control systems. This one looks nice. And got 220 volt at my house as well. Building one contoller out of the question so only option buying a complete controler. And heating elements. But short of cash at the moment

I also built a 220v electric brewing system from scratch. I have a lot of thoughts here. The first thing that comes to mind is that I get nervous having a boil kettle controlled with a PID. Keep a very close eye for a boilover because it can happen in a split second. You may not have time to change the setting on the PID to turn down the heat. You might have to turn off the power switch to the PID if this happens. I went with a rheostat type of setup called an SSVR (Auber Instruments) for my boil kettle. It’s a dial knob that allows me to quickly turn to anything from 0 to 100%. I use the PID for heating up mash and sparge water only. You can make a PID work for a boil, but just be careful! My second concern is that you will need a 20amp electrical outlet for 1650 watts. If you have an older house, you might have 15 amp outlets which are rated for a maximum of 1650 watts. An electrician will tell you that you should never run more than 80% of a circuit’s capacity. Check your main electrical panel and read what it says on the breakers. Third, make sure any GFCI’s and extension cords are 12 gauge which is rated for 20 amp. Finally, make sure you aren’t running anything else on that electrical circuit while brewing. At 110v, a 20 amp circuit will max out at 2200 watts. You can make a 110v system work, but just understand there are safety reasons as well as power reasons why Sneezles, myself and others chose to go with 220v. I love electric brewing. It’s efficient. It’s indoors out of the cold outside weather. You don’t have to deal with propane. I’m sure you’ll love it too.

You nailed it well Brewdvm!! How about building your controller? It can be as simple as the “knob”… That would amount to replicating an electric stove top with the twist knobs… Old dawg pointed out a little bit fancier one that operates like the newer push button stove tops… I paid $20.00 for that… I bought most of the guts from Auber instruments… They are a wealth of knowledge, and gizmo supplies… At mashing temp and holding, I’m at 18% power… Once at full boil, I maintain it with 65% power. When I did my first test run, just using water, I was spraying water on the concrete floor and some of the spray did cause the 220 GFCI to trip. Its a precaution no electric brewery should be without, no matter the voltage… You’ll be glad you went to electric!! Sneezles61

Take a look at Robobrew or a Grainfather. Similar operations, but in a more convenient package.