Do you think you could use a wood fire (like a camp fire in a fire pit) to successfully do a boil. I was thinking of trying it. I would assume that a partial boil would be the way to go, so you wouldn’t have to heat as much water/wort. Has anyone ever tried it… with success?
I’m sure it’s been done. After all, beer was made before stoves or propane burners. Just wondered if there might be some issues I’m not thinking of. Any advice is appreciated.

Never tried boiling that much on a fire before. I would be concerned with ash getting into the boil, so might want to use a screen.

If you do try it, perhaps a swedish fire log 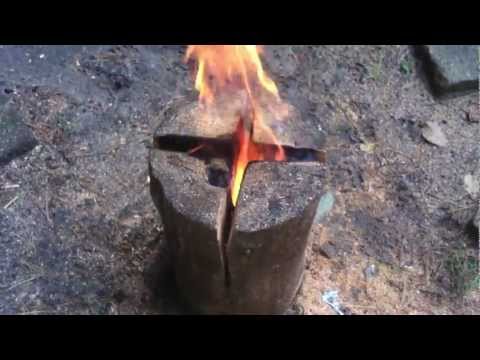 I boil down maple sap over an open fire. I cut a 15-gal keg straight up the vertical axis and had a guy weld a frame for the two halves. It works great to boil up to about 12 gal at a time, or 6.5 in each half. It takes an awful lot of wood to get it rolling, but if you were only boiling for an hour it wouldn’t be so bad. I boil down sap all day long in an epic weekend of woodsmoke and homebrew.

I’ve thought about brewing another batch of Gratzer/Grodziskie and doing it this time over an open flame in the woods. Good idea on the screen, but I’ve had them melt into the sap. So maybe screen it post-boil. You could hot-rack it into some sanitized kegs and then chill in the river or lake. I’ve also heard some guys here attest to storing unfermented wort this way for some time, then pitching when it’s time to do it. I think you’d want to delay fermentation until you got back to the temp-controlled zone. I need to pick up one of the CO2 chargers for purging head space to go truly mobile. In the past, I’ve just charged up an empty keg with CO2 and used that to purge head space in my receiving keg, so that would work too if space wasn’t a constraint.

Go for it! A couple years ago, I filtered some water from a high mountain lake and brewed with it when I got home. Just before we left the lake, I scattered some of my dad’s ashes there. So although I didn’t actually brew while camping, I have brought a little bit of the wilderness into the kettle. That’s the beauty of homebrewing - it’s such a personal craft that consistently produces unique experiences. Each batch is its own happening, and you can choose your own adventure.

[quote=“DrShroom”]Never tried boiling that much on a fire before. I would be concerned with ash getting into the boil, so might want to use a screen.

If you do try it, perhaps a swedish fire log

would help.[/quote]
They sell those Swedish fire logs (though they don’t call them that

) in the stores here, with the “X” pre-packed with kindling material so you only need to set a match to it. Never thought about using them for brewing. Hmm…

Beers have been brewed since before the discovery of bottled propane. – just sayin’
:cheers:

Didn’t one of the popular beers of the 70’s brag about being brewed on wood fires?

Beers have been brewed since before the discovery of bottled propane. – just sayin’

That’s true, most brewers in Europe use electricity. :cheers: