Hey guys. I brewed my Caribou Slobber on Saturday and put it in the fermentor that morning. Around day 1-2 my air lock was bubbling a little. Day 2-3 my air lock was bubbling a lot. Day 4, my air lock stopped bubbling. I thought it was a little too early for my air lock to stop bubbling. I opened up the fermentor and it smells like alcohol. There is a ring around my fermentor showing that there seem to have been some krausen, but that ring is an inch or an inch and a half above the level of liquid now. I didn’t have anything to measure the temperature of the fermentation, but I put it in my basement. My temperature in the basement is around 63-64 degrees. I also put the fermentor right under the air vent as well.

I am not sure what to do at this point. Is this normal? Is my yeast dead? Is my beer done fermenting? Any ideas? 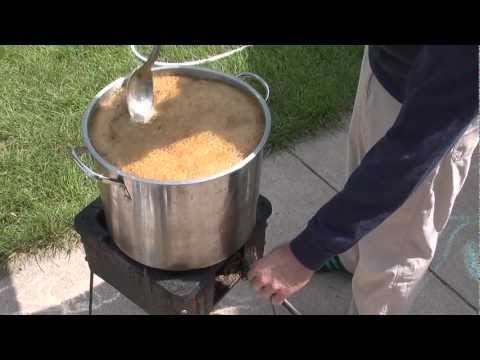 This is the video from Northern Brewer. My Caribou Slobber looks very similar to their beer at 9:15. They say roughly 1-2 weeks it should look like that and mine only took 4 days. This can’t be normal…

Did you chill your wort before you pitched the yeast? Do you know what temp it was roughly when you pitched the yeast? Actively fermenting wort can easily be 5-10 degrees above ambient temperature and warm wort can ferment very fast. Just because the airlock is not bubbling does not mean that fermentation is complete. Active fermentation usually only lasts a few days to a week for me but I let them sit in the carboys for at least 3 weeks before transferring. Do you have a way to measure gravity?

Rad, I don’t have a way to measure gravity at this point. I plan to make another order from Northern Brewer with some other stuff that I may need, but I was assured that I could make beer from the essential starter kit without any additional things.

I should have written this down, but I am almost certain that the wort was around 73 degree when I pitched the dry yeast. After boiling, I gave the kettle an ice bath. Then mixed the wort with cold water as I did only a partial 2.5 gallon boil. I am aware of the fermentation differential against ambient temperature. I did a lot of research on that. I was very certain that my basement would be cool enough. In fact, I just took a temperature reading of my basement and it finished at 62.9 degrees.

I guess this is not the end of the world. Will a fast fermentation affect my beer in any way? Flavor? Etc?

check with hydrometer the grav of your brew if your beer is still fermenting. than wait two days check again see what going on . like what radacast say maybe your wort to warm when you did pitch your yeast or it could be a leak some where do you use the fermenting bucket or the big mouth bubblers me gonna move way from these bubblers gonna use glass alloys to avoid leaks with the seal.

I used the plastic fermenting buckets that came with the essential starter kit. I did notice that there was a very small pool of water on top of the bucket around the red seal where the air lock goes in. Would this have affected it?

You can absolutely make beer with the essential starter kit and nothing else. I would recommend a hydrometer. I bought This setup with my second order from Northern Brewer. This helps to know for sure when your beer is done. You take a sample reading when you think it may be done and then another 2-3 days later and if the measurement is the same, your beer is definitely done. The only way you will know if it had any effect is when you taste it. Caribou Slobber is a great brown ale kit that I enjoyed quite a bit with extract. You should take a small sample in about a week (make sure you sanitize whatever tool you use to get the sample out) and see how it tastes. If it fermented hot, it may taste strongly of alcohol. Some of that can age out but typically not completely. I would say as a guess from this information, it should be ok but you won’t know until you sample it.

The water on top was likely sanitizer or whatever solution you put in your airlock being pushed out by active fermentation, there should be no problem with that.

Thank you! I will give it another week or so and try it out. I don’t have a secondary fermentor at this point. I am thinking for my first batch I will just let it sit an additional week in the primary. I’ve seen some comments about cold crashing the beer. What does that do? Is it affective?

Does fast fermentation cause fusel alcohol?

Typically fusel flavors come from fermenting too hot. Cold crashing can be used to help clarify a beer but I’ve never done it. I use half a tablet of whirlfloc in the last 5 mins of the boil for my clarification agent. I wouldn’t worry about it for your first batch.

I’ve found cold crashing to be both affective and effective

It will help get the yeast to drop while giving it a period of cold conditioning. And don’t worry… There will still be plenty of yeast to bottle condition unless you lager that baby away for 6 months.