Not sure this belongs here since not much in the line of tasting data but we did try a number of beers in Marquette, MI. Spent the weekend in Michigan’s UP ringing trails in our side by side. Saturday was a rain day (yes, we are fair weather riders) so paid a visit to Black Rocks and Marquette Harbor Breweries. Love the vibe of BR as well as their 51k, Nordskye. They also had a Saison on that my wife and I found delicious. Only got a pint since it blew while we were there. We had a flight: 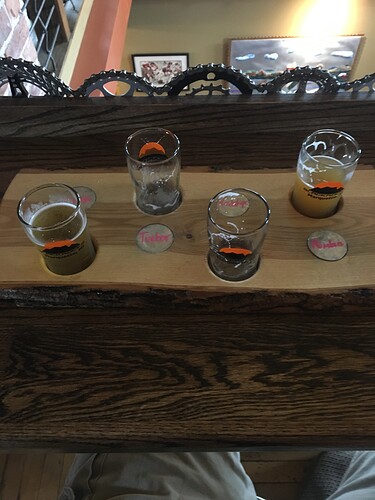 Went to the Vierling which houses the Marquette Harbor Brewery. The vibe there is more of a restaurant feel and since that seems to be the main attraction although their beers were very good. Had a flight there as well which includes all 10 beers on tap for $13. 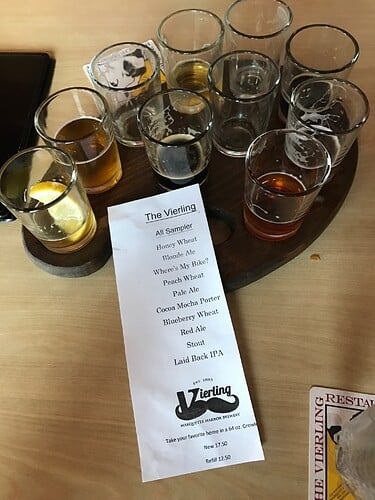 Nice. I’ve noticed places that do good food get away with mediocre beer.

I thought the beers at Vierling were good but prefer the brewery vibe at BR and Ore Dock over the restaurant vibe. Really a nice range as well.

You missed a real gem up in Ishpeming at Cognition! Also, Jasper Ridge has really turned around with their new brewer.

I think the brewer at Vierling makes some of the best beer in town, at least when he isn’t too busy brewing blueberry wheat for the tourists. A necessary evil. The quality of the food has gone down in recent years with the huge increase in tourism, but I’m glad that the quality of beer has been maintained.

Been to Cognition and I agree, a gem! Would’ve loved to habe gone but ran out of time. Glad to hear Jasper Ridge has turned around. Last time I was there I was very uninspired. Chocolay River in Harvey is closed if you didn’t know. I liked their Blast Furnace. I think next time we might stay a night in Marquette and do the whole gauntlet.

Sounds like a great trip! I met the Ore Dock folks in Traverse City at the brew festival, nice people, good beer.
What were the temperatures like? (I have to live vicariously through others, here today the heat index is 105* !!!)

Since we’re talking about running the gauntlet… don’t forget about pictured rocks brewing company on your way back downstate, too. Very good stuff. There’s another brewery that recently opened in Munising, but I haven’t been there and can’t recommend one way or the other. Last time I was at Tahquamenon falls brewing company, I think I was served the absolute worst pint I’ve ever had at a small brewery. Recommend skipping it, plus it’s a bit out of the way.

It was way too hot for me… I think it was all the way up to 72F here yesterday. Just wrong for this time of year!

Temps were in the 70’s pretty much. Friday was a little chillier so I wore a jacket in the Rhino. Saturday was the rain day so hence the Marquette trip. We were able to sit on the cabin deck that night and enjoy a cold one and cigars in t-shirts though. Fantastic weekend!

The one in Munising is Shooter’s Firehouse. They have some good beers but tend to be a bit eclectic with the touristy fruit beers and also are really small so can run out easily. This time they seemed to be pretty flush. My wife enjoyed a milk stout and I had an IPA that was quite good. I’ll have to look for Pictured Rocks next time. Not familiar with it.

Yeah- way too warm for archery season. I butcher my own but like to let them hang for awhile and its way too warm for that. Not hunting tonight for that very reason even though it’s gorgeous out.

Pictured rocks is the one that brews for Shooter’s. Agree on the touristy stuff, but he makes some great porters, ipa, and milk stout. I think he’s brewing on a 1-barrel system, so it’s got to be tough keeping beers on tap in the summer.

The new one is East Channel… haven’t been to that one myself. I’ve heard mixed reviews, but that’s to be expected with a fairly new brewery. Heck, even blackrocks didn’t get great reviews until they expanded their brewhouse.

I am so bummed we missed out on East Channel. We were a couple of blocks from there several times. Didn’t even know it exists. NOW I do though and will be back up there in November so will hit it then.