We will be holding the Mills Big Brew a week before the AHA Big Brew Day, as we have been doing since 2012. This will allow homebrewers to join us for “The World’s Largest Big Brew”, and then be able to brew with their own club on May 5th. The Mills Big Brew will be held at the Rochester Mills Production Brewery in Auburn Hills on April 28, 2018. There is no cost for this event and we will be accepting 125 entries.

On June 9th, we will invite everyone back to the brewery for a people’s choice competition of the beers brewed during the Big Brew.

Our sponsors have donated five malts and nine hops varieties that will be available for you to use on Big Brew Day (you can also bring your own ingredients).

Registration is through a google form at:

After registering, a confirmation email will be sent out within a week and will include information on logistics for Big Brew Day.

Hope to see you on April 28th! 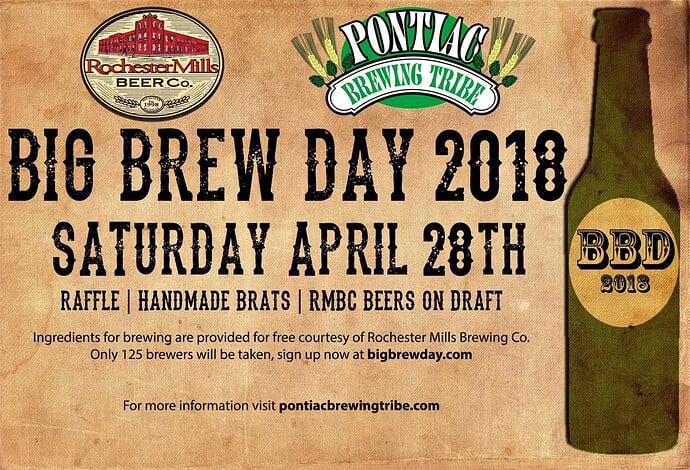 I like that you get a great spot for your brew event… Why don’t you join us for conversations along your brewing journey… Its good to have new input to this great hobby! Sneezles61