Belle Saison vs Nottingham for Cider

Last time I made cider I used 3 gallons of Motts 100% apple juice with only ascorbic acid and apple juice. Used a packet of S-04 that was sitting in my fridge for awhile and I wasn’t super happy with the results. It smelled a lot like rubbing alcohol maybe hot ferment or stressed yeast (I did just pitch dry and I’m going to rehydrate this time). So I’m going to try again. 5 gallons this time but I’m thinking about changing yeast strain. Also I picked up 5 gallons of Musselman’s fresh pressed 100% apple cider hoping for a little more character in the final product.

I didn’t use anything but yeast, yeast nutrients, and apple juice. However I want to make sure I don’t need to use any camden tablets with this apple cider. It does say pasteurized which means I’m good to go correct? Is yeast nutrient really needed? I think last time I used 1/4 tsp per gallon or 1/8 tsp per gallon. It was the Wyeast blend. Wondering if I used too much or it affected taste. I know apple juice lacks nutrients for yeast health. Should I use yeast nutrient from LD Carlson which is diammonium phosphate and food-grade urea or a yeast energizer or stick with the Wyeast blend?

Found on Brulosophy he makes a cider with 5 gallons of apple juice and Belle Saison yeast and dry hops it with 2oz mixture of Citra and Armarillo hops. I know I’ve read a few people don’t think the yeast strain imparts much with cider like it does with beer. I agree that cider must is different from wort in many aspects. I’m wondering if I such use the Notty I have in the fridge or pick up some Belle Saison this morning. I don’t really want to make a split batch since I’m thinking about kegging this batch.

Does your juice contain sorbate or preservatives? That’s the thing to watch for. If it does, it can harm the yeast so you would want to pitch a big yeast starter. If it has no preservatives, then yeast health should not be as much of an issue.

Use Nottingham. You’ll like it. There’s nothing special about Belle Saison yeast at all for cider.

Nutrients are totally optional – I never use any and my ciders turn out great. But if your juice has preservatives then it might not be a bad idea to use some. I use real juice from real orchards, no preservatives. If you can find some like that, it’s best. 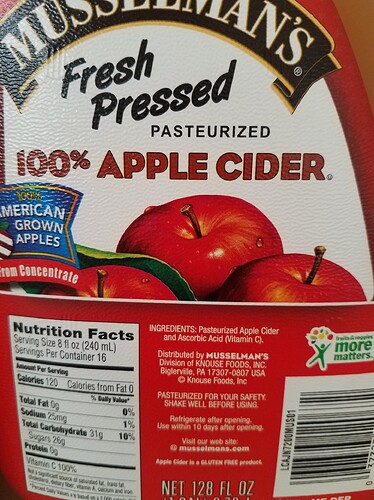 Great. I think your yeast should be happy then, with or without nutrients or a big pitch. One pack of Notty should be good for up to 10 gallons of juice. If only making a gallon or two then use just a fairy dust sprinkle and you’re good to go.

Awesome thanks for the info! I don’t mind rehydrating the dry yeast but I’m always concerned about tempering the yeast before pitching. Should I bother rehydrating or just sprinkle on top?

I rehydrate yeast according to Fermentis instructions. Wort in the range of 77° to 84°F. After 30 minutes the starter wort has cooled to be close enough to fermentation temperature. Temperature shock to the yeast may not be the problem as once thought unless the temperature difference is extreme.

Totally optional. I never rehydrate and like I say, turns out great.

Dave always has good advice. Just an alternate viewpoint… I’ve had some really horrible ciders made from Nottingham, which threw major amounts of sulfur compounds. Even after a year in the carboy, it stank of eggs. The real issue is that apple juice is pretty nutrient deficient as far as yeast are concerned, and adding DAP or some other yeast nutrient (they all work fine) can keep the yeast fermenting instead of respiring. When they go to respiration instead of fermentation, they can pull sulfur out of the environment and form hydrogen sulfide. And don’t just add it all to the beginning - I’ve had much better success with staggered nutrient additions. Half up front and half as fermentation slows, or break it up into thirds. Maybe I’m just more sensitive to sulfur, but since doing this I’ve had much “cleaner” ciders after primary fermentation that don’t take months of aging.

I like where you’re going with the belle saison, but WY3711 would be even more awesome. Mostly because it produces large amounts of glycerol, which can help maintain a little bit of body in something that finishes as dry as a cider. Esters are usually pretty subdued when pitching a POF+ yeast in a cider, but it certainly is a bit different than a clean yeast like Nottingham or S04.

I’m pretty sure Belle Saison and Wyeast 3711 are one and the same yeast strain. A few people might disagree, but I find they are as closely related as two different manufacturers can possibly make them.

I think you may be right about the glycerol. Either of the above saison yeasts are highly attenuative but don’t make the final beverage taste thin or watery either.

Nutrients should help with sulfur. Time and laziness usually also help. I’m surprised a cider would still have sulfur after a year. Usually it clears up MUCH faster than that even without any nutrients.

Hence my aversion for using Campden in cider… I can’t say for certain that it’s responsible, but there was something seriously off with that batch and I’m not taking the chance again!

So I just pitched the dry yeast and added a small amount of wyeast nutrient 1/2 tsp. This morning I noticed it started to get a sulfur smell. Added another 1/2 tsp of nutrients then another 1/2 tsp a few minutes ago. Air lock went nuts after the second addition of nutrients. I think the nutrients made the C02 come out of solution and it wasn’t that the yeast suddenly go some much needed nutrients and started going crazy. I probably won’t add any more for the remainder of the time.

Took a gravity reading tonight to see how it’s doing. 2 weeks in and its at 1.008 @ 60°F. While it’s earlier and has a higher gravity than my last attempt at the moment it seems to have a better flavor with the Musselmans Fresh Pressed Cider than the Mott’s 100% apple juice I used.