I was reading a blog post recently that started with this image:

That’s a rather large line of people waiting for a release at Hill Farmstead in Vermont. I believe it was for their tripple IPA. I’ve heard of similar lines at Dark Lord Day, Pliny the Younger releases, etc.

Some things things that urk me:

Here is an even LONGER line at Russian River. Again… for an IPA! Pliny the Younger 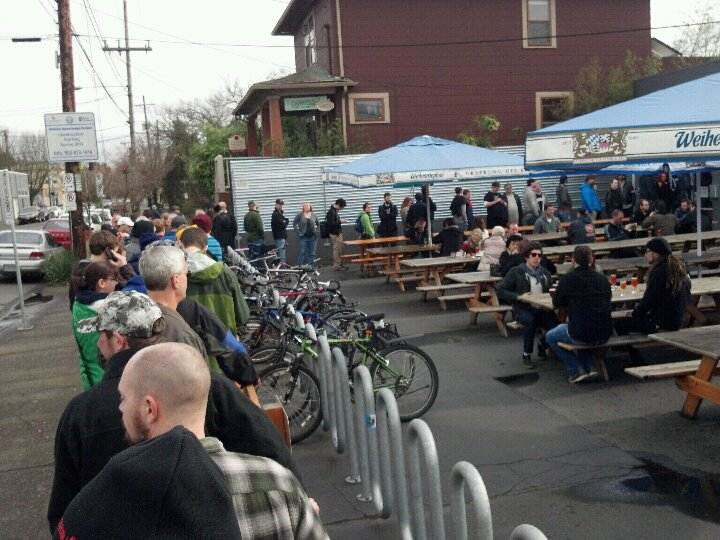 Now, I know I’m not the only one that feels this way. And I know that IPAs are the hot-ticket for "Today’s Beer Geek

". But what I don’t know is if my feeling towards beer fandumb are simply my tendency to see through BS, or because I’m a homebrewer. So I’m asking if any avid homebrewer on this forum regularly takes part in such releases. Going just once to “be there” doesn’t count.

The brewery here sold out of 180 cases of bombers they had on hand in an hour (that’s 2160 bombers at $8)… They scrounged up an extra 180 cases the next week which sold out in about the same time I think.

I have not waited in line for a beer release yet. I once sent my wife over to Victory for a Dark Intrique on their release but the line was a 30 minute wait. She laughed at them and left. They actually sold it for much more on their release at the brewery than at distributors a week later. Go figure.

People wait in line for opening movies and iPhones which are in much more supply than Pliny the Younger and Heady Topper. I think it’s just something to do to make it feel more special and important.