Back at it after 10yr break and already asking "is this normal?"

Just a quick background on me: Brewed AG about once a month for several years back around the 2005-2009 time frame then stopped. Now I’m back at it and, as my tastes have changed, I’m doing my first stout.

My question is mainly for those of you that are familiar with stouts and porters. Back when i was brewing, I was into browns, hefe-wiesens, IPAs, etc. Now that i’m into the dark stuff, I selected the Irish Dry Stout AG kit for my initial dive back into the hobby.

Brew day had it’s share of n00b mistakes all of which were quickly overcome. The new shirron plate chiller worked like an absolute champ and racking/pitching went as smooth as ever. I dehydrated the safale-04, pitched at around 76degrees and had activity within a couple hours. Had a splendid, happy bubbly krausen formed within just a few more hours and it ran good and strong for about 25hrs. 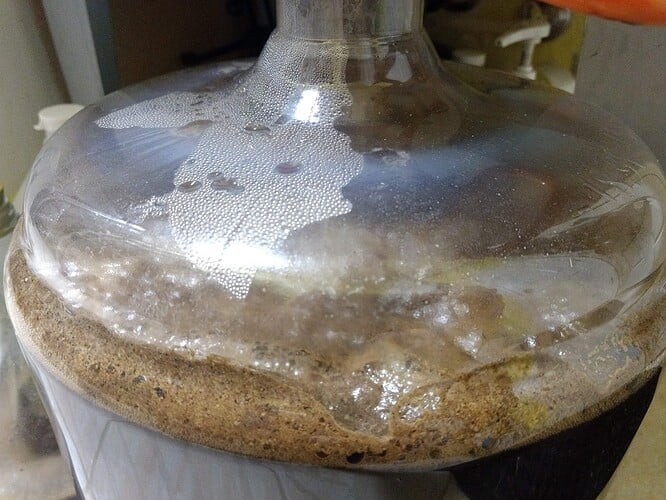 During the time, i’d say the airlock was chirping along at about 3 or four “clicks” per second. Then, just as quick as it all started, it finished. So here’s the “is this normal?” [for stouts/porters] question.

I’m not into the worried or concerned stage at this point. Still well into the RDWHAHB stage.

I’m just wondering what ‘normal’ is for heavies. I’m going off of a 10yr old memory here, but i seem to remember having a good strong fermentation head for several days with the light to medium brews so maybe this is standard fare? I just expected it to be longer. idk…

Welcome back. At those warm temps I would expect a short vigorous fermentation. Next one do around 70 to slow it down. That said us04 for me takes a little time to finish even after it slows so watch your final gravity

Ok, will do. Thanks so much for the input BrewCat!!

I’ve got it in what i think is the coolest area of the house right now (Arizona in the summertime!). Do you have any suggestions for finding a cooler spot? We don’t have basements here and I’d hate to freeze the wife out for 2 weeks straight (as funny as that would be… she gripes at 76, lol).

Man, i forgot how exciting brewing is! I’m like a little kid counting down the days till Christmas. lol

What I do when the fermenation chamber is full ( which is often) get a plastic tub and put water in it. Then freeze an assortment of milk jugs and water bottles. Put your fermenter in there and keep rotating the ice bottles as often as needed. The bigger volume of water the better. In the real hot days you can prime the water with a 20lb bag of ice. The good news is the stouts and porters are fine with warmer temperatures. I actually like what the 04 puts out at warmer temperatures.

Very good idea. In a couple weeks I’m going to try dumping the next one on top of the existing yeast bed bc I’m super stoked to try that method. I’ll be poking around for a large cooling tub in the meantime.

Welcome back to the fun hobby. Me do live on a tropical island so hot as well. Me do use the swamp cooler system. For temp controll. Haha on the wish list. A glysol cooling temp control system. I do use. Most the time. Yeast what ferments at higher temp. This works perfect. Like kveik. Or olslo. Yeast.

You left a bit if air in the carboy (which could have been used for more delicious beer) but the thick foam on top is what I see on my stouts.

@zihyer I see you’re at SV in southern AZ. I’m in Gilbert AZ and ran into the same struggles with temp control. I’ve been using the kveik yeast in my last few ales. The can ferment in a range from 70-99F depending on the strain. I pitch as high as 90F and leave in my closet fermenting around 78-80F. Even the kveik finishes up in about 4-5 days at those temps. I have an ale in the fermenter at 78-80F using the SafAle US05. It just finished the aggressive part of the process. The krausen is starting to drop to the bottom after 5 days, but I plan to leave it alone another 10 days before preparing to bottle it. My OG was 1.052 and I expect my final TG at 1.011. Good luck.

Thanks Olanwade! I’m definitely going to look into that strain.