WY 3787 harvested from blow off

I brewed NB’s Velvet Rooster on 6/21/15. I started the fermentation with a blowoff tube installed. The end out flow end of the tube was in a container with well water. I wasn’t worried about not using Star San solution since the blow off assembly would be removed within three days.

I covered the blow off container with plastic wrap when seeing the amount of krausen being pushed through the tube. Was interested in seeing what volume of yeast was expelled. If the volume of yeast was significant it might be worth reusing since 3787 is a top cropping yeast and ABV is very low in the first days of the fermentation. After cold crashing I estimated 10 milliliters of compacted yeast was harvested.

I used this yeast in a 0.5 liter starter with an OG of 1.015 a couple of weeks ago. Have about 20 ml of compact yeast in the pint jar. May be awhile before I use this yeast again. My plan is to revitalize the yeast every month or so. I’ll pour off the brown krausen layer before the next starter. 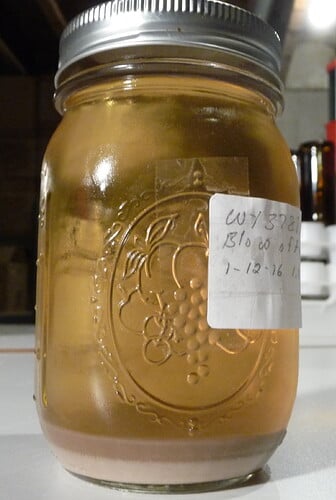 Before the next starter I may leave the yeast at room temperature for a couple of weeks. Hopefully this will be sufficient time for a possible infection, from contamination in the open blow off container, to exhibit visually.

As long as your tube and collection vessel were clean it should be fine. That said isn’t the benefit of top cropping to pitch immediately to a batch ?

I’ve been playing with yeast for a while now and find that the yeast will be fine under the blanket of starter wort/beer for over a month without any problems, as long as its cold. I see the metal band up there, do you have some plastic wrap on the top of the jar? Just from my experience, the metal started growing stuff I wasn’t willing to let near my yeast and did dump out some jars of yeast… I think we had a short discussion about that last summer… in the forum… Sneezles61

I have the canning lid sealing the jar. Haven’t experienced any problems associated with the lids in the few years I’ve been harvesting yeast. I will begin watching for this though. I have to much harvested yeast that I will not use. As long as there is room on the yeast shelf I’ll use a couple of these jars as control subjects for mold growth.

I did dump one jar of yeast due to an obvious infection. This jar was filled to the neck. I could see a rubbery looking glob growing at the top of the beer. The glob was about one-half inch in diameter, pale with some blue and brown. I’m pretty sure I caused it. I remember that after pouring the yeast slurry from the fermentor I reached over the jar for the lid. I realized that was a mistake immediately.

I remembered this from years back. Build a Burton Union System: Projects - Brew Your Own

Our homebrew interpretation of a Burton Union system can be used for harvesting yeast or reclaiming beer that would have been lost out the blow-off tube. Save the beer for your glass, not your floor.

I had read that and forgot about it. Gives me an idea to try it out without the return to the fermentor. I have enough headspace so no beer is lost. The outflow tube would go to the bucket. The yeast may drop out in the container with the pass through.

May take a while to try out unless I quit using the large fermentor. Don’t brew that many beers which require a blow off tube.