I know you guys like pictures, so here’s my question is this just co2 or do I have something else going on? I brewed this a week and a half ago pitched some yeast I harvested from a prior batch a 1272. Had a good fermentation going kreusen dropped and was going to keg and dry hop this weekend. Now I have a little bubbling in air lock. Let me know what you all think. 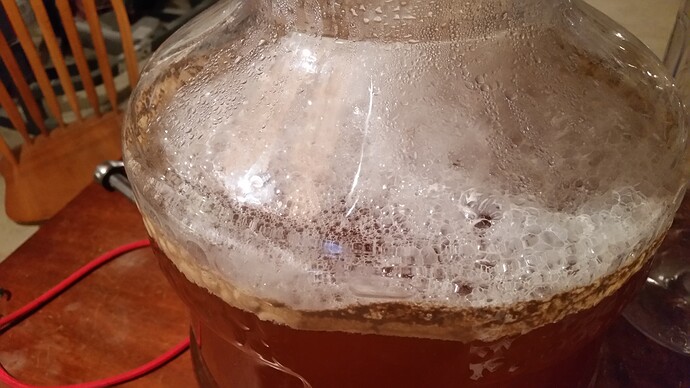 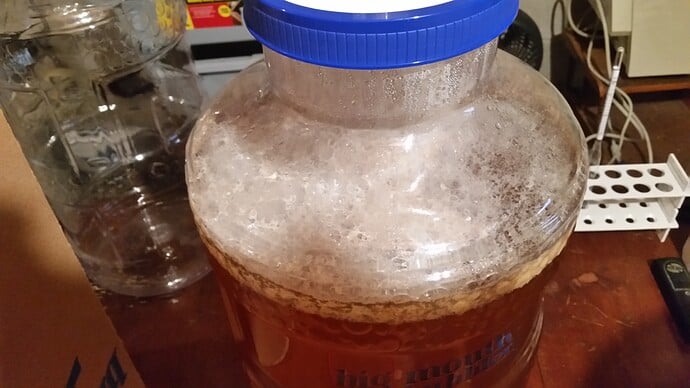 The bubbles are clear without any sign of oiliness or slime so I would say they are being caused by CO2 off gassing. Could even be foaming as the result of the CO2 and some residual Star San if you used Star San.

If it could be a pellicle forming it will be more evident by this weekend. I really doubt it is though.

It’s a tiny bit concerning… keep an eye on it. Those large stacked-up bubbles look similar to some of my intentionally infected batches and could be the start of a pellicle.

What style beer is it?

It’s a SMaSH beer my first AG. @flars yes I use star san.

You’re probably OK, but keep an eye on the surface to see if it starts getting more slimy looking. Also, you might want to give it a little extra time in your fermenter. At 27IBU, you probably don’t have to worry about bacteria, but if you have any wild yeast in there they might cause over-attenuation so make sure your terminal gravity is where you expect it to be before packaging. If it comes out lower, that’s a sign of a problem.

Just an update the beer finished at 1.006 so racked to the keg and dry hopped we’ll see how it turns out in two weeks. Oh by the way the foam on top in the fermenter sunk back into the beer. I’ll let you all know how it turns out. Thanks for all your input.

Well here we go, started drinking the SMaSH beer that had the bubbles. Tasted very good for a couple of days got the biscuit flavor I was looking for and nice hop flavor. But now I get very little hop aroma and not much bitterness dry hopped in the keg purged o2 and carbed for a week. What gives?

It just seems as tho the hop aroma doesn’t hand around long. There has been discussions here about this… Sneezles61

Usually the number 1 reason for hop fade is oxidation.

Funny, I was told it doesn’t matter here recently…

I agree, but when I racked I have tubing that goes down to the bottom of the keg. As soon as I dry hopped I closed it up and hit it with co2 and purged the head space of o2. Then force carbed the keg at 20 psi for three days then into the fridge at 11 psi. So all I can do is add more hops and see what happens.

I agree, but when I racked I have tubing that goes down to the bottom of the keg. As soon as I dry hopped I closed it up and hit it with co2 and purged the head space of o2. Then force carbed the keg at 20 psi for three days then into the fridge at 11 psi. So all I can do is add more hops and see what happens.

How much late addition hops and dry hops?

Sorry missed it above. That’s not a lot of late additions and I would expect that it wouldn’t have a very strong aroma and would fade quickly.

You’re not going to get much, if any, flavor or aroma from a 60 min addition. Truthfully, that’s a waste of good mosaic hops and would use a higher AA, neutral hop like magnum to bitter. I would lower the 15 min addition to .5 oz, use the additional .5oz at 5 mins. The other 1oz you gained from not wasting it to bitter could be added .5oz at 3 min and .5oz at 1min. I like your 2oz dry hop and wouldn’t go above that. 3oz, is IMO, a waste. Now you’ll have plenty hop flavor and aroma.