Any idea why the wootstout kit is gone? No trace of it ever being there.

hmm… the work of our new corporate overlords?

Probably discontinued, but it’s in the archives.

And so it starts, …where’s that darn tinfoil cap?

would also get you to the PDFs.

Looking for something to brew using windsor yeast?

The WootStout kit is currently sitting in a Corny in my basement waiting to be bottled. I brewed it back in March.

This beer was the first big beer I ever brewed. I was doing extract back then and am now doing all-grain. After reminiscing with a neighbor about past brews I wanted to brew this again so I went to the NB site to download the recipe and found none. So, next best option is the source of most of my brewing knowledge: this forum. Unfortunately the links @voltron provided are no longer valid. What next? Might as well ask Northern Brewer themselves. I don’t remember who I chatted with (I closed the chat window) but he quickly grabbed found the recipe and sent it. It made my weekend!

Not sure how to upload a pdf here. Since I’ll be entering it into Brewer’s Friend anyway, if I can’t figure it out I’ll just post a link to the recipe there.

I have it… Extract back then as well. I last brewed this memorial day 2016 and I still have some bottles.
Steeping grains
1 lb Flaked Rye
.625 English Black Malt
.625 English Roasted Barley
.325 Baird’s Light Carastan
.325 Crystal Rye

Thanks @squeegeethree! I only asked for the all-grain recipe. I see someone did add the recipe to Brewer’s Friend but the mash guidelines are different.

I saved a screen shot of the recipe and saw it was only 118k, so I’ll upload the image file. Leave it to me to make things more complicated than they need to be! 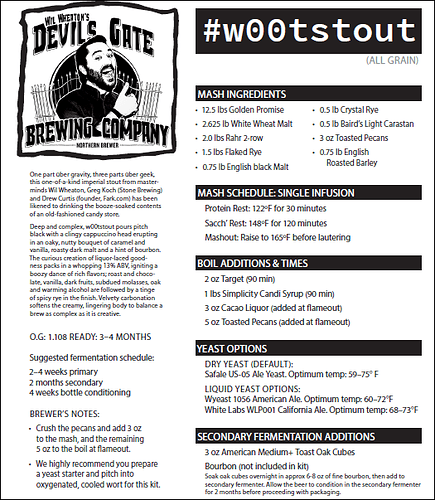 My kit had more hops and pecans. Currious

What did Will get called to do another star trek series so he can’t brew? Sneezles61

Change of ownership at NB changed the relationship I had assumed.

Change of ownership at NB changed the relationship I had assumed.

I also assume the corporate overlords are renegotiating everything. I’m just glad the NB staff is as helpful as they have always been; both online and at the store.

My kit had more hops and pecans. Currious

Both recipes have 8 oz of toasted pecans. The all-grain has them broken out as 3 oz in the mash and 5 oz at flameout. I find the 3 oz in the mash odd. It’s not fermentable and I don’t see that small amount affecting flavor.

I am working out the water requirements for this brew. This is the first time I’ll be attempting a step mash and I have a question about sparging. If I want to reach my target pre-boil volume of 7.5 gallons, my sparge will only be 2 gallons. Will that negatively affect my efficiency? Should I increase the sparge and boil longer? Should I just increase strike water and go no-sparge?

I ran the numbers through a calculator and surprisingly, with that massive grain bill, 2.1 G( I got 2.3) of sparge is about right. You’ll have to make it count, !

It looks like its a 90 minute boil so extending that won’t help much.

My next step before brewing this is to figure out the water profile. I have only recently started playing with water treatments and this is the first time I’m targeting a water profile (London). So any input would be appreciated.

I use Milwaukee city water 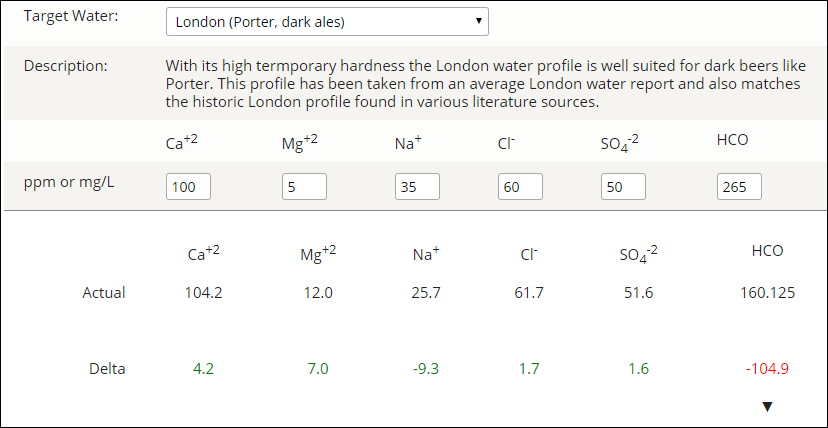 Seems pretty straight forward but I fear I am missing something. For instance, am I too focused on the numbers and missing something affecting flavor or some other aspect of the final product. Affecting flavor is why I chose not to use Lactic Acid. I’ve also read that chalk is hard to dissolve. Any tips to help with that? This is a big beer that won’t be consumed until this Christmas and hopefully the next.

I’m not familiar with the program you’re using.

Is the second screen shot your finishing water profile AFTER your additions? If so you’re pretty close. I personally would target closer to 5.4pH.

I personally feel your belief of lactic acid is totally unfounded. I’ve personally only used lactic acid and have never had a reported issue. Studies out there indicate that it too is unfounded and takes quite a bit of lactic acid to affect flavor. Of course, this is taster specific like any other off flavor. And with that grain bill you’ll need to use far less than phosphoric acid to reach your desired pH.

Chalk is pretty much undissolved in water. You have to use CO2 to get it to dissolve. You can use a bottle and carbonater cap. It’s easier to just skip chalk additions.

@loopie_beer, Thank You for that definitive statement. Your opinion means a lot. In many ways you are the new Flars! I plugged in lactic acid and found I only needed 1 teaspoon vs 3 tablespoons of phosphoric!

[edit: Actually needed 2.5 tsp. I had forgotten to remove the acidulated malt I added when playing around with additions]

In the second screen shot, the “Actual” values are after the additions and the “Delta” line is how much they differ from the target profile. The screen shots are from Brewer’s Friend water calculator.

I currently have a scale that reads to 0.1 oz but I think I’m going to get one that reads down to 0.1 gram. They aren’t too expensive. I just needed a reason.

Sorry. SRM = Standard Reference Method. It is the color of the beer. I would use a water profile based on that rather than a city profile. Even back in the day brewers understood enough about water to treat it some way. Even if it was boiling and decanting it to remove minerals.

As you’re seeing the more dark malts you use the more mineral addition. Dark roasted malts create a more dramatic effect on pH drop. Your essentially making your water hard to buffer that pH to ensure it doesn’t drop below the desired pH.

I see you’re using city water. Don’t forget to treat it for chlorine/chloramines. If your not familiar look into potassium metabisulfite treatment.

Your campden tablets should go in first and foremost to eliminate the chloride in the city water… Since I have well water I don’t use… And I don’t remember… I per gallon, or one per 5… Oh dear…
I think city water profile isn’t much in today’s brewing… I think knowing if the water is soft or hard is the key. Hard water takes more correction to lower mash pH. That to me is a where I start every brew day… I feel I get good results, brew clears up better, my fermentation usually end a bit lower, head retention is outstanding and the lacing on a glass…
2 other"salts" I will use is calcium chloride and gypsum… Try a test… Pour one brew into 2 separate glasses, then take a pinch of either salts and put into the glasses then do a side by side… You’ll be amazed how you can change a brews profile… So with that said, AFTER the mash is complete, that’s where the other salts are employed in my brewery…
I’m curious as to how your brew will turn out… Sneezles61