What do you use for your primary?

I have glass, plastic and buckets. I gotta say, buckets are the easiest to handle, move, clean, etc. I’ll use better bottles when I want to see what’s going on with the beer. Like if I’m making a lager and want to get an idea when I should raise the temps for a d-rest. It helps to see when fermentation is slowing down. I have 2 - 3 gallon glass carboys that I only use for split/experimental batches. Like if I want to split a beer into 2 - 2.5gallon batches and ferment each at a different temperature. Or maybe I want to dry hop one and not the other. Or maybe pitch two completely different yeast. But even the 3 gallon carboys are heavy and pain to move around. Not sure why 6gallon carboy owners swear by them. They’re heavy, awkward to move, more difficult to clean and dangerous if dropped. Glass also allows UV light in. Buckets and better bottles don’t. So you don’t have to keep them in dark places.

where are you guys sourcing the barrels?

[quote=“TheBeerMedic”]where are you guys sourcing the barrels?[/quote]Quote from my website: 1/30/2011 Note About the Big Red and White Fermenters

The fermenters are made in Holland by a company called Curtec http://www.curtec.com . They are called 7055 wide mouth kegs and have a capacity of 55 liters or about 14.5 gallons. They have an o-ring seal in the screw on lid and function very well for 10-12 gallon fermentations. I drilled through the lid a ½” hole and installed a rubber grommet so it will accept a 3-piece airlock. I got my containers from a guy in Ohio who uses them (or the product inside of them) in his business. He uses the baking soda product and then sells the containers for about $40 each (shipping included). His name is Doug and his email is dbgrammllc@aol.com if you want to see if he has any available.

In case he does not have any more, you can also get them from the following website for around $40 plus shipping http://www.generalcontainer.com/product.aspx?pid=20

It is the N37055 (5th item). These are very sturdy, easy to clean and pretty easy to transport, even when full. I have had mine for 3-4 years now and they work great for my 20 gallon batch sizes using 2 per batch.

The advantages of them vs plstic buckets of carboys is that I only need two per batch instead of 4 buckets. Other than that, they are comparable. Very easy to clean out and inspect for cleanliness. They are a bit heavy when filled but at 6’5" and 300+ lbs, I have no problem carrying them around.

Buckets for the most part unless I make a small batch and want to watch the action.

+1 to General Container for the Curtec’s.
Last time I checked Doug didn’t have them.

I am all about the glass carboys currently, as I can’t stand not seeing what’s going on with the fermentation. I also love the fact that it is impermeable to anything (except light), and keeps the nasties away due to immunity to scratches. I am a pretty big guy, so the weight of the filled carboy is not really that much of a problem.

However, saying this, I really do need to find an alternate idea for my primary due to several incidents I have ran into with them. The safety issue with them is pretty severe, so I have been thinking about investing in some better bottles so I can watch the fermentation without taking the risk of shattering them. But I am also very intrigued by these curtec drums you all are talking about as well…

I just ordered another 6 gallon glass carboy, off Amazon for $30 including shipping, although I must admit it is more for wine and mead production which requires long-term bulk maturation. Great price, excellent reviews: http://www.amazon.com/Paklab-Glass-Carb … 626&sr=8-1

I did think about the fact that I could transfer wort from upstairs to a downstairs large fermenter one bucket at a time - the pour from bucket to fermenter would just provide additional aeration. Something to think about for the future.

[quote=“Roddy”]Used my 55 liter curtec drum for the first time yesterday for a 10 gallon batch. Seems a lot simpler (don’t need to be as carefull) than my glass carboys, and I can dump 10 gallons in and only pitch one starter. I wish I would have ordered two.

I brew outside and ferment in my basement, and so have to move my wort down stairs to the basement. Otherwise I would use the Curtec drum to keep ferment temp even for the entire batch, and for the yeast management reason you mention. Only problem is that I just am not as big as Greg Muller so use buckets which I can carry!

[/quote]
On my first 10 gallon batch I carried the container down my stairs. Next time I will probably use my 2 wheel cart and ratchet strap. It sucks getting old.

I have a 6.5g glass carboy which is used for 5g batches and a couple of buckets that I use for 10g batches. Since I brew outdoors and ferment in the basement, this works well for me. Once SWMBO approves my garage to brewery conversion plans, then I’ll use a single vessel for fermenting 10g as I wouldn’t have to physically carry it down the stairs.

If we (my son a myself) are doing an 8 gallon brew, then we use a 10 gallon Brute container. If we do 10+ gallons, we use a 15 gallon white closed head poly drum (like the one at US Plastics)

I started with buckets, then decided I needed to ferment in glass. So I bought a couple 6.5 gallon carboys, a 5-gallon carboy, and a couple 3-gallon carboys. After a couple years and after reading lots of horror stories (and after the thrill of watching beer ferment waned) I decided to go back to buckets.

Now I ferment in buckets, and only use the carboys for wine/mead/extended aging of big beers. It’s SO much easier to clean and carry buckets and carboys. And there’s no way a plastic bucket could sever your nerves and potentially incapacitate you…

I use a 15 gallon used LME carboy.

Started with buckets and used them for years. When I upsized to 10 G batches, I switched to a 15 Gallon Corny. Works like a charm.

That’s it on the left. I have rollers on the chest freezer so I can put the corny in there, roll it over to the brew stand, pump the wort into it, then roll it back. It gets a bit heavy when there’s 10 G of liquid in it. 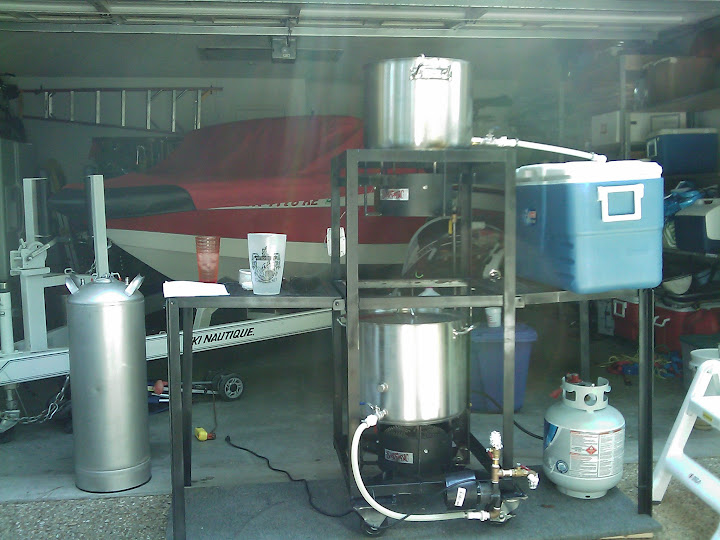 After posting a pic of my rig using the sanke keg I realize I should have provided some details.

The device fits over the neck of a sanke keg with the spear removed using a tri-clover clamp and rubber gasket to seal. It has three ports- one for an airlock or blow off tube, a thermowell for the temp probe and the racking cane which stays in place during fermentation.

I clean it using water and PBW and a carboy brush. I typically brew two 10 gallon batches with the same yeast, racking the second batch directly on the yeast cake from the first batch. I usually brew a light or medium strength beer first, then a couple weeks later brew a medium or strong beer where I re-use the yeast on that batch. This way I only have to clean it every other batch.

To sanitize it I boil a couple of gallons of water in it for 20 - 30 minutes and use the steam to sanitize. On the one hand you can’t see inside the keg to be 100% sure it’s clean, on the other hand, due to the nature of heat sanitization, it doesn’t need to be 100% clean. It’s a fair trade IMO and I’ve had no contamination problems.

It’s located in temp controlled fridge with a dual stage temp controller so it can heat and cool depending on what I need. Since it’s in my garage and I live in MI, it was important to have this control. The heating is done using some heat tape (sold for use in terrariums) wrapped around the keg. The tape is 20 watts per foot so 4 feet is about 80 watts total and I have no problems keeping it warm in winter.

The fridge is located near my brew stand and I pump the wort directly into it from my brew kettle so I don’t have to lift anything.

I built a stand for the fridge to put it up off the ground high enough so that when primary fermentation is complete, I can siphon directly into cornie kegs to use as a secondary and for serving. The stand means I don’t have to lift the primary first or use a pump or pressure to transfer it.

To start the siphon I blow into the sanke keg to get enough pressure to get it going. The racking cane height is adjustable so I move it down until I see sediment, then raise it slightly from there.

I use 10 gallon cornies for primary fermentation, then I pump straight to serving kegs.

[quote=“cramer”]I use a sanke keg for primary, then straight to cornie keg.

Where did you get that? I use 6 gal carboys, but I have a sanke that would be great for 10-12 gals. The Curtec drums are a nice idea, also.

[quote=“narcout”]I use 10 gallon cornies for primary fermentation, then I pump straight to serving kegs.

I really like this idea. I’ve thought about doing that for a while, fermenting 3 gallon batches in a 5 gallon cornie. Never have to use a siphon, beer never gets exposed to air. It’s a nice idea.

I use 5 gallon carboys for 3 gallon batches and use the orange caps and start the siphon with a keg filled with CO2 and a picnic tap with a tube on the end of it.

Cornies are perfect for fermenting.