What Are Your 2013 Home Brewer Resolutions?

Looks like the Mayans were wrong. 2013 has arrived with a bang and that can only mean one thing: we have another 365 days ahead of us to stroke our egos and taste buds by brewing and consuming delicious home brew. As we look ahead at the possibilities of 2013 what resolutions do you have as a home brewer?

Now that I have been using biab for a bunch of batches I plan to increase production. Brew at least once a month if possible.

Keep perfect records for all my beers.

Get my s**t together and put together a good portable 5-10 gallon setup that I can take with me when I move. Get a 3 tap kegerator set up. Brew good beer.

Do not make the same brewing mistake twice.

I haven’t put much thought into it, so off the top of my head…

Get all 5 taps installed and up and running at once! :cheers:

[quote=“kcbeersnob”]I haven’t put much thought into it, so off the top of my head…

Finish building my Keezer
Stop hording hops
Yeast harvesting
Drink less commercial beer[/quote]
I can go along with # 2. I need to wait until I’m under 10 pounds before I get more. Never happen. Keep away from my hops.

What’s NG?[/quote]
Natural Gas.[/quote]
Pretty obvious now that you say it. Would that be using regular household pressure, or some kind of reservoir/regulator set-up?

First goal for me is to just start brewing again. It has been 3 years. Going back to my full AG setup is a “no-go” in our current house. I am thinking a BIAB setup doing 2.5 gal batches. Mash inside, boil outside. I might even start out with a few extract batches.

Aside from just starting back, my initial goal would be beer on tap for St Patrick’s.

Longer term, I would like to figure out a way to make brewing these small batches work on a weeknight or early weekday before work. Weekends won’t work for me. Maybe I can brew a 2.5 gal batch every other week.

Assuming all goes well with that, I would like to get my kegerator up and running with four taps. I have never brewed enough to have more than two on tap. Right now it serves as a spare household fridge.

I converted to NG this fall with one of these burners: 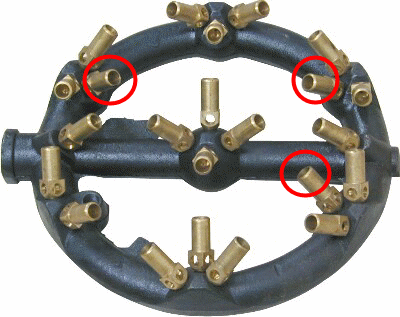 These are impinging burners meaning the flames impinge on one another. The ones I’ve circled in red don’t impinge on any other burners so I’ve removed them and plugged them. I run it on regular household gas pressure and regulate it with a ball valve. It brings 7 gallons of mash temperature wort to a boil in around 15 minutes.

Looking over my brewing notes, I realized that I have never brewed a Blonde Ale. That is my first up to brew on my next brew day.

Also plan to do my first Cider.