What are you drinking now

(the concert wasn’t terrible.)
….
He could still pull off the ballads pretty well, sitting at the piano, but when he tried to mambo, he looked like Joe Biden.

Colder than a Taun Taun’s Toenail by J Wakefield brewing, delicious and refreshing for a winter brew day. It’s so green I should have saved it for St Patty’s day. 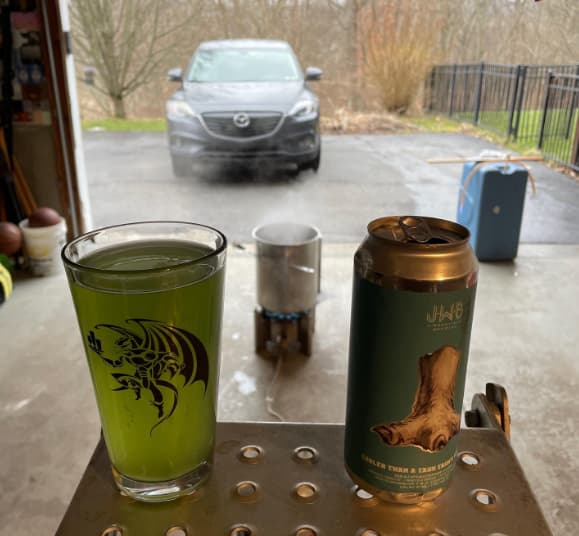 It’s a raspberry fruited sour, not sure where they got the coloring from, but it was very tasty.

Id enjoy that beer out of the can

Better make a stash now…. Just around the corner!

I don’t actually drink green beer on St. Patty’s, that’s the one day of the year I drink carbombs.

Also, I prefer Murphy’s to Guinness for that.

My home town. Coleman’s Green Beer Sunday will go on. It’ll be the first without the man who created it - syracuse.com

The traffic light on Tipperary Hill has the green on top. They have tried to turn it right side up but years ago but a group named " the stone throwers" would smash out the lights. It is still green on top.

I gave up green beer I’ll stick to the Irish Stout. We used to ski Brody back when. They would dye the snow green and serve green beer.

It was a nice beer. Flavorful yet easy drinking. Might even be a nice house beer for the Lite beer crowd. Kveik yeast helped out to make it more lager like under warm temps.

Now you got me questioning our stop lights…. I’ll look tomorrow… dog gone it…
Sneezles61

Not a senior moment. It’s just one of those things you don’t have to think about. If the lights were horizontal we would still know red is stop and green is I’m Irish pour me another Guinness.

Im sure you guys have seen horizontal stop lights. Guess what color is first. Do you remember the time before yellow? Actually they used to be just red now only a few of those. I don’t remember when the police man used to switch it manually. How about the cop in the road? I like that the best used to be an art now they look bored. We had a guy in Newtown was the best he always danced man was he good. Would dress as Santa for the holidays. Ah memories

We are too far away from mainstream to have cops direct traffic at an intersection… well, years ago… my birth place town had only one stop light. That didn’t change until 72… now they even have them way out in the deep woods around here…
Horizontal… hhhmmm, there was one in Utica, around 91 when I was there working… even had a very bright flashing light when it was red… almost looked look arc welding…
Right now I’m drinking coffee… very dark… coffee… MJB Columbian…
Sneezles61

We have one stoplight in our county. Last time I went through the intersection it was blinking red one direction and yellow the other.

Getting back on track, had a couple of Stone IPAs with some ribs tonight. Perfect!