Meh. Anyone else score some? It was a good trappist but a few others (Roquefort) are nearly as good, IMHO it doesn’t warrant the rarity, the title (Best Beer in the World) or the price tag ($85/six pack… ouch).

I tried to find some last week but my 3 favorite stores did not bring any in. One manager told me he could not jump through enough hoops to get any. This was at a shop that I can usually get any Belgian I want. Yesterday I found a place online that was selling the 89 dollar box for 320. Too rich for my blood.

“Doesn’t warrant the rarity” what does that even mean? Rarity is a function of production volume.

“Doesn’t warrant the rarity” what does that even mean? Rarity is a function of production volume.

I think he meant something along the lines of “the quality of the beer doesn’t warrant the notoriety, but it is only BECAUSE of the rarity”

FWIW, I’ve heard the same thing about Westy. Good but not great. Certainly not worth the dough, but you are supporting monks who make great beer and need a new roof

Coors was rare outside of Colorado once…

Not paying $85 for a 6pak of beer I can make a reasonably close 12gal clone of for less than that.

I thought about splitting a 6 pack between two other friends. Not a horrid deal at $30 each and we where going to “draw straws” for the two glasses. But it turned out that even in Vermont, the two designated bottle shops either had a line out the door starting in the morning or had an early raffle that we missed.

Probably for the best. I don’t even like the style when it goes past 9% and even at $15/bottle, it’s still 2.8x more expensive than Rochefort 10, which although not the same, is close enough. I prefer Rochefort 6/8, anyway.

I’m going to come out with a question that may seem silly to some… what does the number after the name signify? (Rochefort 10, 6/8, St. Bernardus Abt 12, etc.)

It is an old way of measuring strength of the beer. No longer used and it is only meaningful today to compare relative strengths of beers from the same brewer. eg Rochefort 10 is stronger than 8, but isn’t necesarily weaker than Bernardus Abt 12.

I rarely chase special release commercial beers anymore. Normally requires too much effort with too little reward. There are too many fantastic easier-to-get beers out there to justify going out of my way for the rare ones.

But even if I wanted to get this one, I thought I heard it wasn’t going to be distributed in the KC market.

I’m going to look in a few more places, but I’m thinking it didn’t come to my neck of the woods.

I think this is a beer that needs some age. I have purchased bottles in the past when in was only $20+ shipping from belgianshop.com. I aged it for a year in the fridge, and it was a great bottle of beer. It was much richer in flavor than Rochefort 10, or St. Bernardus Abt. 12 which I drink at least once a month.

I had a Westy 12 at a Christmas party a couple of weeks ago. A friend brought it over from Belgium, and it was not as complex as the one I aged. The hop character covered up some of the malt complexity. I had the same problem with one of my Westy 12 clones. No one liked it the first year, and the second year, my friends loved it.

I don’t think $85 is too much for this beer. Two glasses would probably retail for $6 each. That means the beer is $73 for 6. That is under $13 per bottle by the time they add tax. Belgian shop sells bottles for $40 each and you still have to pay shipping.

I think: Store the beer correctly, and drink it in a year. You will be rewarded. The aged samples I have had, have had no signs of oxidation, only malty, toffee, fruity deliciousness.

I am glad to read this review thread. I have been eaten up with curiosity, and have been both unable to get my hands on any, and unable to justify affording it anyhow.
Thanks for being my guinea pigs.

[quote=“The Mad Zymurgist”]I am glad to read this review thread. I have been eaten up with curiosity, and have been both unable to get my hands on any, and unable to justify affording it anyhow.
Thanks for being my guinea pigs.[/quote]

Grab a bottle of St. Bernardus Abt 12 (fairly commonly available, and for a much lower price). You’ll essentially experience virtually the same beer as the Westy.

I happily paid my $85 even though I’ve got the same brick from Europe when it came out over a year ago. 2 nice glasses and 6 bottles of beer which basically boil down to paying $10.50 per item? To me that’s not a bad deal and something very fun to bust out for special occasions. I’ll say this about the Westy from this new pack…it seems more banana forward than others I’ve tried.

Thank you Wahoo for your quip, allow me to clarify. Rarity is a product of production volume AND demand. For as much Westy as they produce, if the beer were not overly hyped, there would be plenty to go around. It does not deserve anymore praise than other well regarded and widely available trappist examples which are selling for a few bucks a bottle.

I think there is more hype about the hype than there is hype about the beer. most of the time when I speak to people or read internet postings by individuals that have had Westvleteren 12, it’s the same opinion as you-- great beer, but not measurably better than the other great trappist ales. Yet I keep hearing people talk about how it’s overhyped. If it is, I think it’s overhyped by people that haven’t had it.

Not paying $85 for a 6pak of beer I can make a reasonably close 12gal clone of for less than that.[/quote]
…and that’s another reason why we homebrew.

Here’s a link to a Westy review. You might recognize these gents.

A blog and webshow highlighting life's great food and fermentations 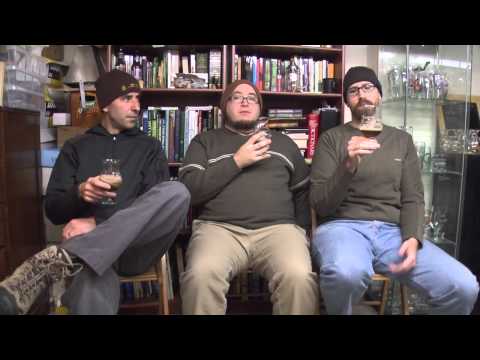 I could brew so much beer for $85, not going to happen. I like good beer. I like fancy beer. I like expensive beer. But I’m not at the point in my life where I’m ready to throw away a wad of cash just to try something that is good, fancy and super expensive just because it’s rare. Although that was tested when a friend said he saw a bottle of Sam Adam’s Utopia down the street and started talking about splitting it.

[quote=“Barliman”]Here’s a link to a Westy review. You might recognize these gents.

A blog and webshow highlighting life's great food and fermentations

You beat me to it.