I’ve been brewing for a few years (~15 extract beers, recently moved to all-grain) and have been having the following problems with my brews over the past 4 or 5 batches (maybe longer but I can’t recall):

I have installed a fan-based cooling hose to push cool air to the dispensing tower as well, and the kegerator is otherwise well-insulated and runs at ~39 degrees. Each beer gets at least 2 weeks in the primary and two in the secondary before kegging. When I keg the beer itself from the secondary fermenter, I added 1/3 cup priming sugar well-boiled in fresh water, as advised by several resources I’ve consulted.

What can I change so I don’t have to go through this extended process for each keg, and avoid wasting so much beer to overfoaming?

I use this grain mill:

and had a local shop guy set the gaps for me and test the milling. I made the gaps a touch smaller after the first batch, but the O.G. results were the same.

I’ve followed the strike temp, mash-out and rest, and sparge temps and time instructions as best as I can. Maybe I’m a few degrees off here or there, but I think it’s all pretty close to targets.

How can I increase my mash efficiency?

I also make a yeast starter 1-2 days before brewing per this method:

After flameout, I use an immersion wort chiller and get the beer down to the target fermentation temp within 20-30 minutes. The primary fermentations are taking place in a 6.5 gallon glass carboy, and are always well-active within a day of pitching the yeast after brewing. I leave the fermenters in my office, which has an ambient air temp of about 66-71, just about right for most of the yeasts/ales I’m brewing (though I do understand the temp wavers a bit in that range). After time in the secondary, I rack the beer to the corny keg, attach the co2 line to top-out the headspace, and then move the keg to storage in my cool, dark, ~50-55 degree basement until I’m ready to tap it.

The o-rings on my kegs also seem well in-tact, so if there is any contamination, I’m not sure where it could be coming from.

How can I remove the slightly sour taste from my brews?

Here are all the other relevant general details I can think of regarding my setup:

Advice greatly appreciated! I put a bunch of time into brewing and I’d really love to step up my game so I can be proud to share my beers with more people.

There are lots of great threads on this forum about improving efficiency. Grain crush, temperature, and mash pH are your most likely issues. You stated that you often get beer into your gas lines - have you thought about infection as a source of your sour taste?

ShadeTree: I’m reading up more on mash efficiency now to see if I can spot the problem. Re: the slightly sour taste, I’ve certainly considered infection as the cause, but if that is true, I have no idea where the source could be. Do you think some beer getting in the gas lines occasionally could be infection source? I suppose I don’t get that in that the gas lines are sealed, but I’m not sure how to prevent it without a guess disassembling the gas lines every time any beer backs up in them (which sounds like an enormous hassle)?

HCbrewing: Thanks, I wasn’t aware of the ‘either, not both’ comment there, so that’s good to know. What still confuses me though is that if the beer is significantly OVERcarbed, why does it still taste flat for the first several pours out of the new keg? Also, when my sugar-primed keg is first put on at my standard 10-11psi, before any shaking the first pours seem to deliver explosive foam. Would this be due to too MUCH priming sugar, or something else?

[quote=“proposut”] I’ve certainly considered infection as the cause, but if that is true, I have no idea where the source could be. Do you think some beer getting in the gas lines occasionally could be infection source? I suppose I don’t get that in that the gas lines are sealed, but I’m not sure how to prevent it without a guess disassembling the gas lines every time any beer backs up in them (which sounds like an enormous hassle)?[/quote]If the beer’s getting into the lines why could it not also come back out into the keg? But you shouldn’t have beer backing up into the line in the first place - check your procedure and eliminate the step that’s allowing this to happen (or install a backflow preventer on the line).

What still confuses me though is that if the beer is significantly OVERcarbed, why does it still taste flat for the first several pours out of the new keg?

Because the high pressure is causing the CO2 to come out in the beer line, creating foam and leaving the beer flat. You may find that you need longer beer lines to balance your system. Are you sure that you got 3/16 ID beer line? You want the beer line to be long enough that the beer pours somewhat slowly, near 10 seconds to fill a pint.

Your regulator might not be accurate, either, I suppose. You can try purging the keg, dropping the pressure to about 5 psi, slowly increasing the pressure until you start to get foam, then backing off a little. If the beer is overcarbed, you may need to purge a couple times to let the beer calm down a little. If your regulator is correct, and you need to serve at a lower pressure, your beer will gradually get less carbonated over a few days and you’ll know that you need to use a higher pressure and longer lines.

HCBRewing: I am positive the line is 3/16 ID - it is labeled as such on the hosing. Is there a better length you would recommend for a standard three-tap tower-type kegerator? The calculators I found online when I recently replaced the lines suggested about 6 feet, so I went with that.

I have found that it’s better to let the beer carbonate for about 5 days at 10PSI. I had issues when I force carbonated. For my English Brown ales and Irish Reds I’m doing about 2 weeks in the primary and racking straight to the keg. Add a cup of gelatin when cold shake and leave it alone for at least 2 weeks to mellow out. I usually sample at one week but it’s still got a bit of a green taste. I have no issues now with overcarbed beer or a lot of waste. Usually I throw out the first and last pint.

I’m going to try the “set and forget” method with no sugar-priming and see how it goes.

Cup of gelatin? Like the plain powdered kind used for terrines and such? Interesting - what’s the science on that?

I’m going to try the “set and forget” method with no sugar-priming and see how it goes.

Cup of gelatin? Like the plain powdered kind used for terrines and such? Interesting - what’s the science on that?[/quote]

Sorry for the late response. Yes plain unflavored Knox gelatin. It helps to clarify cloudy beer. I don’t always automatically add it, but if you aren’t using a secondary as I do it tends to be a little cloudy sometimes. I chill the beer first for a full 24 hours to about 34º and then boil about a cup of water and let it cool to about 150º and add the gelatin stir till completely dissolved then add to the cold keg and shake like hell. The gelatin will adhere to the cloudy stuff and usually coagulate on the bottom of the keg. You will usually get all that cloudy stuff in the first pint or two then it clears up beautifully

A properly filled pint should take 10-18 seconds to fill. Your beer lines should be 9-10 feet of 3/16" ID bev line. Ideally this is how your pint should pour. This is a video of me pouring a Rye IPA. Notice that I can control the level of head by adjusting the drop on the fly. 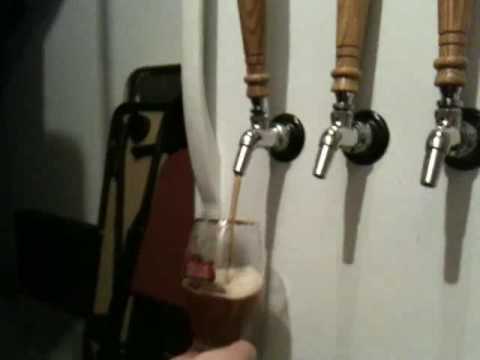 add the gelatin stir till completely dissolved then add to the cold keg and shake like hell.

I assume you purge the headspace with C02 before doing this or else you risk oxidation.

One other way I do it, If I keg, I age the beer in the secondary for as long as I intend to age, then keg and my preset for carbing and pouring is at 12 lbs. I carb for 2 wks, then I keep it at 12 lbs for pouring , and the pressure never changes. For me, this works for the all around pressure, and I don’t have to dink around with the regulator. It takes 2wks when I bottle so I take 2wks to prime kegging. It all works with my scheduling for prime.

[quote=“Scalded Dog”]add the gelatin stir till completely dissolved then add to the cold keg and shake like hell.

I assume you purge the headspace with C02 before doing this or else you risk oxidation.[/quote]

I had a similar issue with beers coming out of my 3-tap system with a tangy flavor. It wasn’t bad, but I could tell something wasn’t right. I took my entire dispensing system apart and cleaned to fix the problem. One issue that I surmised was that when I had a keg to carb up I would disconnect my other two kegs, then connect my new un-carbonated keg on the dispensing side, jack the pressure up to 30 PSI or so while rocking the keg back and forth. After a couple of minutes I’d disconnect and set it all back normal. But what was happening was by force carbing the keg this way I was actually getting beer up in my supply lines. And also up in my manifold. So my lesson learned.

Your force carbing method was addressed below, it is either/or not both. You can bleed the CO2 off before you pour, that may help a little. I’d probably disconnect the gas lines, pull the gas release, then pour until the carbonation level relaxed a little. My serving pressure is at 8psi, but my lines are short and the lift is about 30". Each system will be different, but once you achieve balance it’s beautiful.

As far as shooting foam, I think everyone goes through this at first. I would definitely do some research on this board on the “balanced system” concept. Once you get your dispensing running correctly, don’t mess with it. There are some pretty good articles here on NB concerning tube length and pressure and height equations. Foam also occurs in dirty lines and anywhere there is a friction point. My old system had a problem with in inline splice on my lines - as the beer hit the two joints on the way to the faucet you could see it foam and cavitate in the lines.
The flat beer is more than likely the result of the over-carbing and foam during dispensing. Very common.

Hey, at least the beer is drinkable! Here’s your task list: