Top Cropping Yeast from a Carboy

Found this blog post for top cropping yeast from a carboy. I like the idea, and plan to give it a try.

Sometimes I’m a cheapskate. I know it’s not a huge expense to get a new vial of yeast to brew, but I see no reason not to reuse yeast when possible. When harvesting yeast from a batch of beer, there’s many ways to do it. You can pitch a new batch of wort on top of the yeast cake from a previous batch. I’ve done this a few times and it works real well and you get a good fermentation, but I’m always a bit skeptical of pitching on top of the old trub. I’m just afraid that all the old junk will give some off flavors. Plus I have read that the best yeast to use if you are going to harvest, is the top yeast in the krauesen. If you are using a bucket, that yeast is easy to spoon off., but fermenting in a carboy makes it difficult to get at the yeast.

So I rigged up a system to top crop the yeast in a carboy using a racking cane, some tubing, a jar, and an airlock. It works like a blow-off tube, but doesn’t blow off into a sanitizer solution to be discarded. Instead, you blow off fresh yeast into a sanitized container that is fitted with an airlock so you can keep the yeast. The idea is to insert the racking cane into the carboy so the bottom is just above the top of the fermenting beer, where the foamy krausen will be. The cane is connected to tubing that runs down into a sanitized jar fitted with an airlock. So once fermentation starts, the pressure will push the foam out through the racking cane and down into that collection jar. I also like to collect a little beer into the jar as well. To do this just push the racking cane down into the carboy further. 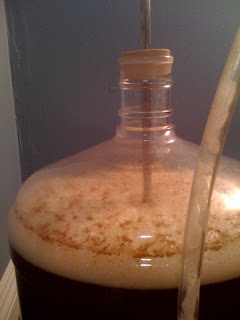 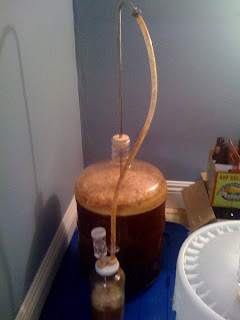 I’ve also seen people use this method with a 1000ml Erlenmeyer flask fitted with a two port carboy cap. But like I said above, I’m thrifty. So for this batch at least, I used what I had on hand. Here is a photo of fresh new top cropped yeast as it is collected in the sanitized jar: 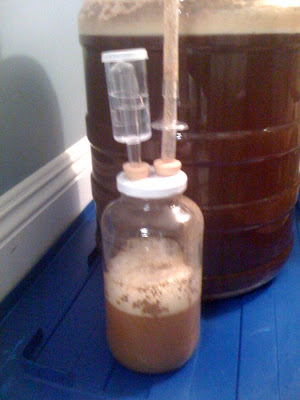 Very Nice. I’ve been working on this myself with 1469, 1272, and 1007 yeasts. These three always blow off for me. Funny thing is every time I am prepared and hook up my harvesting equipment the krausen goes all the way to the bung and stops. I have been trying to avoid putting a racking cane down into the krausen, but I may just have to do that since I’ve been skunked so far. :cheers:

I am going to give it a try for sure. I will report back.

I top crop every beer I make at home and at work, it’s a great way to save yeast and cut down on costs. I have done it with a wine thief and a turkey baster. This way seems pretty simple, I will have to try it next time.