In laws bought me a Fresh squished IPA from Midwest. It was an extract kit but I wasn’t going to turn it down. It was kind of a last minute decision to brew. Went pretty well with a few issues.

Started off with steeping grains. Pulled out my Anova filled up a pot with 1.5 gallons and set it to 155° threw the grains in once heated. Set the timer for 20 minutes and basically walked away. Verifed temp with my Thermapen a couple times. That part was awesome. Added that amount to the 5 gallons in my kettle. Figured starting with 6.5 would be perfect so a slight top off after grain absorption. For the heck of it I checked the gravity of the steeping grains in 1.5 gallons on my new digital refractometer it was 0.2 plato.

Went outside and fired up the propane burner. Kept it covered got it close to boiling and put in the 6 pounds of Gold LME. Stirred like crazy and took a small sample. Figured I would keep the lid half way on. Went inside and sure enough a small boil over. Ran outside and stirred it and adjusted the heat. Wasn’t too bad. Then added first hop addition 1oz of Nugget and put the lid half way on again and stupidly had another small boil over. So I pulled the lid off completely.

I wasn’t exactly ready to brew kind of rushed it. Didn’t have everything planned out. Around 15 minutes left I added rest of LME 3.15 lbs. Threw in my hydra chiller. Screwed up the timing because the directions always end up confusing me with the wordage and times. So I put in 1/2 of whirlfloc at 10 mins and 2oz Mosaic and 1 oz Citra at 10 mins and not 5 mins for the hops.

Then found out my 100ft hose had frozen water in it. Had to bring it inside to the basement and defrost it. Which was a pain. So I shut off the burner before I had hose ready. Finally got it thawed out. Hooked it up and man the chiller worked amazing super cold day and ground water helped a lot with some stirring. Brought it down to 63° in no time.

Brought kettle inside pulled a sample and checked volume. 13.8 plato and just shy of 6 gallons. So I messed up on the volume slightly and ended up with 1.055 and not 1.064. Maybe didn’t get all the extract out of the jugs and not enough boil off and higher volume. Stirred it and took another sample same reading. Left some behind in the kettle and transferred into 6 gallon carboy.

Ended up just straight pitching yeast because I didn’t want to have to adjust yeast temp closer to 63° after rehydrating in 95-100° water. Also didn’t have time to do that before hand.

Not too bad of a brew day for spur of the moment and too cold to stand by the boil kettle.

Not too many people I know have everything go perfect every time. Once on awhile you get a session with a few hiccoughs, especiall. When conditions add a little challenge. Way to roll with it!

I know what you mean by kit instructions being confusing. Sometimes I wonder who writes them. I usually take note of the hop addition times and amounts then forget the instructions.

A boil over outside still beats one on the kitchen stove.

Yes for sure that would have sucked indoors. See the instructions. Like for the late addition it says boil for 45 minutes then add 3.15 lbs of LME. Which means 15 minutes remaining but above it says 10 mins. So the next addition is what screwed me up. 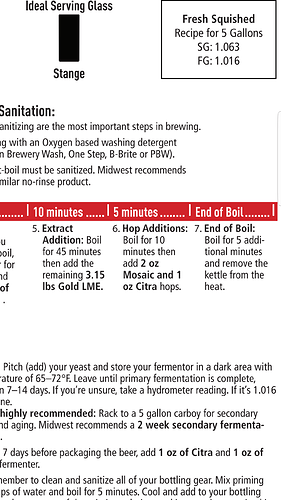 Not too bad. 1.055 is still OK for an IPA. I presume you’re using US-05 which is usually well-behaved in the low/mid-60s, but with 6 gal in the fermenter are you prepared for blow-off?

I like having some challenges… Makes for a day you have to think outside kit box!

You pulled it off… The hop additions are “to get you close enough”. The experimental brewing with Mike Tonsier(?) really explains a very good hop schedule… A few more times and you and your equipment will become one with the brew day! Do report on the final results! Sneezles61

I left some behind in the kettle but yeah it might get hairy. I’m at work now might have my wife check on it here shortly. It was starting to foam on the surface when I left.

1wk update:
Started fermentation at 63° which was yeast pitching temp. Took a little bit to get going so I bumped it up to 64-65°. Once fermentation took off temp stayed around 66° then after 3-4 days I set the air temp up to 68° and let it come up. Pulled a sample and took a gravity reading. Right around 1.010 which from 1.056 (13.8 Plato) put it right around 6% and about 80% apparent attenuation. Didn’t have much luck taking a Plato reading and adjusting it for alcohol. Should have took a hydrometer reading pre fermentation to check against digital refractometer. I’ll have to use it a few more times to get used to it. I’ll have to email Hanna and see if I should test sample more than once or take the first reading as it changed slightly if I checked it multiple times. I could also use a lab grade final gravity hydrometer in my arsenal for more accurate readings. Tastes and smells just like grapefruit and has a nice golden orange color. Still needs another oz of Citra and oz of Mosiac for dry hopping.

Can you post the full pic of those instructions, trying to find out fermentation times , dry hopping, etc. Thanks