Think my batch is infected?

I’m just going to leave this here… look at the texture in this bad boy! Almost has a grainy look to it. 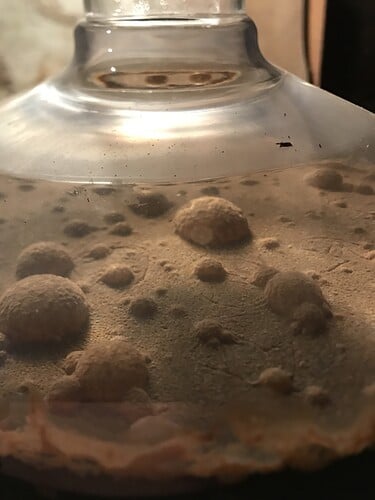 Grainy? Was Breiss part of the mash?

Come to think of it, I think the Vienna malt in there was Briess.

Excellent example of an infected beer for instructional purposes.

Pretty sure your beer had aids

That was from a 2-year old Flanders red. I blended it with a 1-year old batch and racked it over sour cherries at 1#/gallon. I think it’ll need a bit more time, but it’s got potential so far.

When I was in high school, the bottom of my foot looked like that once.

How did you impose an image of the moon into that carboy. Well done!

It looks like the surface of an alien world in the old (original) Star Trek series.

Wow nice!. On the few sour beers That I have done my pellicles have not looked that good.

That’s not necessarily a bad thing… it just shows you’ve done a good job in keeping oxygen out of the headspace. This was one of the silicon universal stoppers - they seem pretty awful for keeping out oxygen. A little acetic acid isn’t such a bad thing in a Flanders, though. None detected in this one, so hopefully the racking stirs up a little.