Thin white foam on top of brew in secondary

racked NB Belgian ale la petite orange into secondary a week ago. now I have a thin white foam
on top of brew. two day’s ago I had to move the secondary was as careful as possible but it still moved
in container no splashing. would this cause a little fermentation to occur.

Without being able to see it it is likely dissolved CO2 that is off gassing after moving it.

Did you sanitize your “secondary?”

With “secondary” you want to eliminate as much headspace as possible. Most spoiling bacteria require O2. If starts forming a pellicle (google image search) then you’ll be fine.

If it does start forming a pellicle you can leave it for awhile to see how it turns out (should be sour beer… Think lambic, gueuze, or Flanders). Keep this beer away from soft materials as it can spread and cause future problems.

Foamy is OK. Off gassing from temp changes is usually the cause, a restarting fermentation can also happen but 9 times out of 10 it’s just CO2.

Filmy or hairy is going to sour. I’m not personally a fan of sours, so I’ve never made one.

yes I sanitized the secondary after racking I did get a little fermentation it slowly bubbled for a day. I think your right it’s co2. 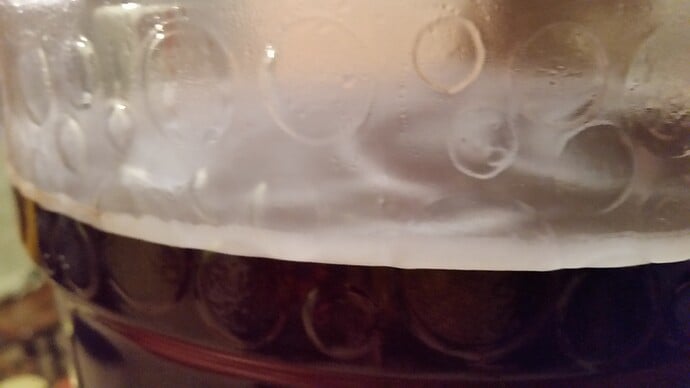 Yeah that looks like CO2. But there is a lot of headspace. Make sure your good with cleaning and sanitizing your stuff or it can cause problems.