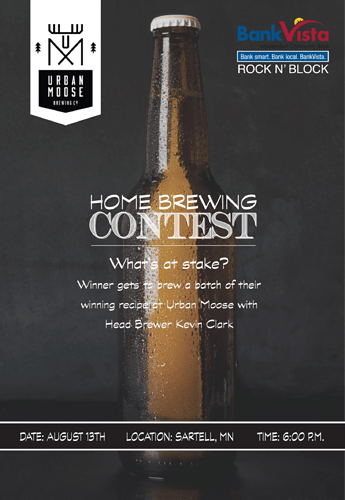 Contestants will be asked to provide 5 gals (Or equivalent bottles) of beer for sampling. Check in will begin at 5:30, public access opens at 6:00pm. Ice will be provided.

Prizes will include the Judges award –
Best of Show. - Winner gets to brew 1 batch of their recipe with the UMBC
Brewer on the UMBC 15bbl system! That beer will be sold at UMBC and a
portion of the revenue generated is being donated to the Sartell Chamber! Winner also receives 6 tickets to the Release party that includes food and a 5 beer sampler. People’s choice award Winner receives 4 tickets to the Rock N Block Beer Release party.

Beers will be judged based upon how true they are to the style they represent. For registration link, please email info@urbanmoosebrewing.com .