Not sure where this goes but I’ll drop it here. My son and I have been brewing what we call ESBS which is a basic ESB, fermented with Danstar Nottingham, and hopped with Citra. It has been well received by us and our beer taster panel (My wife and some friends we hang out with

). Recently a local brewery had a traditional ESB on that was delicious. I definitely get the appeal! Based on that, yesterday we decided to brew a split batch of the following, one batch of our ESBS and one a traditional (I think) ESB. We used Wyeyeast 1028 for the traditional ESB. We’re pretty excited to see how this comes out.

On a side note, it seemed like every time we turned around a gremlin would jump into the process. Nothing major but just one of those days. I am positive we made beer though!

The following recipe is for 11 gallons to the fementers and is different from the previous grain bill. This is also inspired by a recipe Profile - ken_lenard - Northern Brewer Forum posted on here a long time ago. The original called for Styrian Goldings at 15 and 5 but the LHBS was out so we used EKG instead.:

Can’t go wrong with all EKG in an ESB. I really like a mix of EKG and Bramling Cross for the late additions and dry hop. Were you planning on dry hopping either one?

Hadn’t planned on it but I’m open to suggestion.

Haven’t used 1028 yet. I’ve been playing with 1968 and found fermenting close to 70 gives me that earthy taste I like in an ESB. Wonderful style

We cooled this to 64 to pitch. I checked it tonight and the basement is cold and the beer was at 62. I moved it to the warm area so will shoot for 68.

Just checked the Mancave closet and it’s about 64. Both beers have nice krausen and are at about 66-68.

All is well in West Michigan…

I’ve been doing a little cooler for the main portion of the fermentation… And when it slows to a burp a minute, I like to scoot it up to high 60’s, possibly even 70… Thats been how I’ve handled this Australian yeast and it is so good… I need to get an ESB into the fermenter very soon! Sneezles61 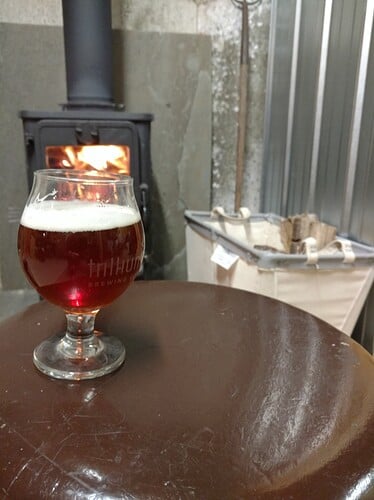 Wait a minute Brew Cat… Looks as though the Brett is trying to escape!! The right hand side is crawling up that goblet… Quick… drink it!!

That’s my old piano stool it’s a bit crooked but when I get tippy everything evens out.

guess I’m not the only one

Took gravity readings and both beers in this post are in the 1.008/1.010 range.I plan to transfer them to kegs today to be ready for Christmas. I tasted both gravity samples and am very pleased at this point! The chocolate malt and torrifed wheat have provided a little more complex backbone with the roasted nutty/chocolate flavor barely there just in the background. Can’t wait to get this one gassed and flowing to see how it turned out! I like where we’re at hop-wise and think I will take the EKG dry hop suggestion under advisement at this point but definitely try it on the next batch to provide a comparison. Any thoughts on adding the halfway through the keg?
I think my son and I worked out what we need and how we can do an airless transfer under CO2 so I’m excited to try that, especially in light of the NEIPA we made getting oxidized and becoming drain cleaner.

Got the all-Citra split gassed first and the EKG is on gas and carbonated. The beer has a nice floral nose/taste which complements the malt nicely. The roast flavor is there but is kept in check by the hop so it’s not too much. Definitely a good drinker with a clean finish.

The traditional’s carbonation level is about where it should be I think. Pouring one off the keg into a room temp glass gives about a half inch of foam which dissipates some over time. The malt flavors are definitely present with the roast flavors coming through a bit more than the Citra version, almost too much, hinting at bitter. This beer is still very drinkable as is so I know it won’t go to waste.

I’d like to do this one again in a 10 gallon batch, backing the Torrifed wheat off about 4 oz. and maybe the chocolate malt off a bit which should cut back the roasty flavor. I’d also like to dry hop half with 2 oz. of EKG at 7 days as was suggested earlier. Any suggestions are welcome.

I think I’m going to drink the EKG version some more then DH the keg with an oz. of EKG in my stainless hop bomb to see if it helps with with the roasty character. I don’t know if it might bring the hint of bitterness forward more? Anyway, still drinkable as is but I think it can be a little better. Fun fun fun!

It sounds as though you a fun pair to drink! I can’t tell you if torrified wheat is different from malted wheat… I will target 1# per 5 gallon batch… I don’t think I get much, if any flavoring, but head retention is good… I’m tweaking hop schedules… I’ve been narrowing down to FWH/bittering, the rest at the end of the boil… DH after primary fermentation is done… If you are really going hoppy, then wrap up a couple ounces in a mesh bag, throw it into the keg let sit 3 days or a bit more, then cold crash… I’m doing my best to get the bitterness to have less bite, and then the flavor/aroma’s to come through… Sneezles61

My last attempt for the summer with an ESB is what I’ve been aiming for
80% Marris Otter
20% 120 C-malt…
I did put in 3 oz chocolate for some more color.
I used German Herkules as bittering
EKG at 5 minutes…
1968 London ale yeast.
Now its been in the keg over a week… Its got a very nice malty back bone, Mix in some heavy biscuit to it…
And the yeast has a character I can’t place my tongue on… I would equate it to some of the imported English brews I’ve had… I’ll enjoy the first keg, and have another lurking deep within the depths of the keezer… I “hope” that one could be tapped this fall.
I’m good with this one… I’ll start a record book now, so as I get a grain bill as I like… it’ll get entered! Sneezles61