One Domino Dot in a 12 ounce bottle will give you about 2.4 volumes of CO2. Fairly good carbonation for a porter or stout but low for American styles. The sugar is completely fermentable and contains no flavoring. It will not change the flavor of the beer.

Thought I would try to fit this in this topic. I am bottling solo.

I added a step to my bottling process which only adds 2 seconds per capped bottle. Saves about 20 minutes and some extra work later on. I put a rinse bucket between the capper and the end of the workbench where the filled bottles are set. Cap, rinse, and let sit until dry. After drying just wipe the bottom of the bottles with a paper towel as I put them in the cases.

Before would move them to a towel to dry then put in cases. Wiping the bottom of the bottles also cleans the bottle. No dried residue on the bottle after pouring and rinsing which often looks like residue remaining inside the bottle.

Took me a few years to figure this out. 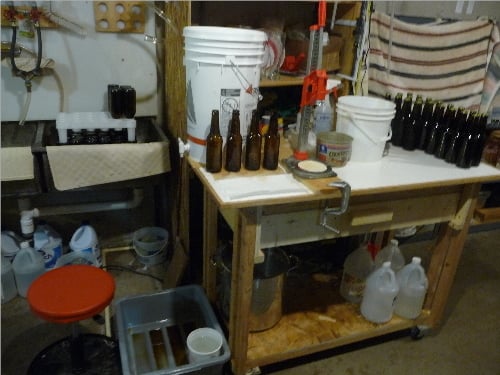 @Flars I implemented your short hose for the bottling wand technique and that works great! Thank you for all of the wisdom you share. It is very much appreciated!

The c-clamp is a hold down for the plank the capper is mounted on. May not be necessary but in my shop every portable tool is clamped.

ah I can see that now.

Im going to be bottling my 1st 5 gal brew very soon. May i add, this will be done solo. What is the best practice. Flars, looking at your picture of your set-up helps a lot! But is there anything esle? Is it prefered or reccomended to cap each bottle as it is fillled, or can it be set off to the side and for an example, fill 6 bottles then cap? Is it best to prime with sugar or use fizz drops? Thanks in advance.

I truly would rather just use a keg, but i have no room. Unless i find one that fits right in my fridge. But then i dont even know what all goes with a keg system. Obviously i am a noobie lol

Do as you feel. I use a red barron capper instead of a bench capper and find it easiest to get in a groove of filling 6 to 8 bottles then capping. Sometimes I put the sanitized caps on the bottles while they wait to be smooshed (the technical term) and keep filling

Yes, good way to do that, then fill a bottle about half full to let your racking cane sit in whilst one caps… Very gently, between rounds of filling and capping, do stir the bottling bucket… NO SPLASHING!! You’ll try to keep the sugar and brew together for a more even carbonation thought the whole bottling process. Sneezles61

I fill 4 bottles at a time then cap. There is some air exposure to the filled bottle waiting to be capped but there is a greater surface area in the bottling bucket exposed to the air. I just settled on 4 for the last few brews for less crowding so I don’t accidentally knock a filled bottle over.

Another way to speed it up is 22oz “bomber” bottles. If you are like me and drinking one 12oz bottle is not the norm and you are mixing priming sugar in a bottling bucket then they cut down the number of bottles to almost half.

I put all the caps I’m going to use, plus a few extras, in a small bowl full of sanitizer. As each bottle is filled I put it on the table, place a wet cap on it, and fill the next bottle. After I fill all of the bottles I get out the capper and cap them all at the same time.
Once the “wet with sanitizer” cap is placed on the bottle it is effectively sealed as long as it isn’t knocked over. I often get the bottling bucket, bottle filler and other stuff cleaned and put away before capping the bottles.

I always worry about any surface area of beer exposed to air during the bottling process. Air intrusion is probably very slow but there is some that may accelerate staling in the bottle after a month or two for some light styles. The bottled beer may start showing signs of oxidation five days sooner if the exposure is too long. I fill four bottles then cap. I used to do six bottles before capping.

Nine bottles here…wife stirs gently while I cap. Why nine? I have no idea.