I saw the thread on here about using an oak spiral in an Imperial Stout, and that got me thinking about using one or two in my Wee Heavy. So first off… Bad idea? If so then don’t bother reading the rest of this

When it comes to sanitizing the oak spiral prior to adding to secondary I have a couple ideas:

2.) Soak the spiral in decent scotch for a few weeks and rack on top of that.

I’m not a scotch drinker so any recommendations on a decently priced, quality bottle of scotch?

I like the cut of your jib, good sir. I think oak is a fine idea.

One spiral should be fine. I prefer the soaking in scotch method, but a few days should be fine. My weekday single malt is the Aberlour 10 year doublewood. A nice little Spey side that I can find for $35 at Total Wine. I’d leave the beer on the spiral for six weeks then bottle. You won’t get much more out of the oak after that, and it should age in the bottle fine.

Thanks. I just went to Total Wine to look at the Aberlour you recommended to find that they don’t ship spirits to where I live. Which really stinks because that same bottle is $60 at my local liquor store. How much scotch should I add to the beer?

I wouldn’t add much. Just as much as covers the spiral. You might be able to find a blended malt that will work. I tend to avoid peat (it tends to be overdone for my tastes) but if that’s your thing, it could play nicely. Maybe ask at your local bottle shop for a recommendation.

Good idea. I noticed the Aberlour was on the top shelf at the liquor store… Makes me want it even more. I’ll cough up the money but I just don’t t know how much I want to put in the secondary. 750mL = roughly 25 oz so do you really think adding the whole bottle would be too much? (FYI i just learned that conversion)

Mind you this is hypothetical, since I haven’t done this myself, but a whole bottle seems like overkill. Bourbon beers usually use anywhere from 3-8 ounces per five gallon batch. Scotch is a bit more subtle than Bourbon, but I still wouldn’t go overboard.

Cool I’ll keep that in mind. How is Johnny Walker?

I’m not a Scotch drinker so pardon my ignorance but to soak the oak spiral in, would it impart enough flavor to justify using expensive Scotch?

I have done Bourbon Porters and used middle of the road Bourbon with good results. Seemed like a really pricey one would have been better off over ice.

I second this… buy something you wouldn’t mind drinking, since you’ll have most of a bottle left, but no need to break the bank. A Johnnie Walker could work… again, it’s got some peat to it, which isn’t really my thing but could add something nice.

I get what you’re saying. But I wouldn’t know - I’m not a scotch drinker. Just a very novice home brewer. What do you have in the fermentor @sneezles61?

Well Luke, I only drink beer. And my fermenters are empty. I have a dopple bock, trying to age, another strong american ale on tap, and apple ale. This W/E I will build up a cream ale yeast so I have 8 jars to work with and finally nail down a cream ale I would enjoy! Sneezles61

When you say build up the cream ale yeast do you mean just keep growing the same starter?

Do you know what’s on the side of my carboy? This is the Wee Heavy. 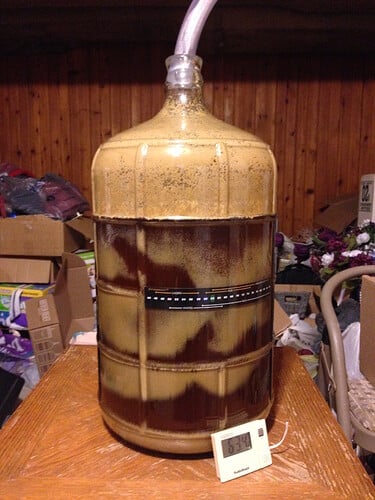 That’s just yeast flocc’ing. Some strains do that. Nothing to worry about, but it makes racking a little bit of a pain as it’ll tend to sink and cloud up the beer as soon as the liquid is disturbed.

Oh alright. Don’t mind the junk in the background… My “beer room” is also the storage room in our basement.

Oh alright. Don’t mind the junk in the background… My “beer room” is also the storage room in our basement.

The junk in my brew room/utility room went into totes. A two high stack of totes with two 14 inch wide laminated closet shelf boards on top holds my cases of conditioning beer.

Sounds nice and tidy. Maybe one day I’ll be the same way…