Hey there… been a while since I’ve checked in here.

I recently acquired a fruit press that looks something like this: 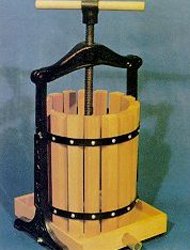 I also got a couple wine boxes full of pears from my friend’s tree.

Last night, took the pears and began chopping them up pretty fine in a food processor. I dumped those into the fruit press until the basket was fairly full. (This amounted to 4-5 Cuisinart’s worth, and at least 1/10th the pears I had.)

After tightening down the press about as far as I figured it’d go, I had collected a little over 600ml of juice. I’d never pressed cider before, so I was very surprised by the poor yield. I knew that if I kept this up, I’d be at it all night and would end up with about a gallon and a half of juice. So I aborted.

I guess my question is… was this to be expected? Something wrong with the pears? Did I go about my pre-press treatment wrong? Is it actually supposed to be as cumbersome a process as this turned out to be? (Filling the basket with the metal crossbar in the way… sloooooowly raising the screw shaft back up so you can empty out the basket and start over… and a few other things in my process that could probably be tweaked but are just tinkering around the edges…)

I was pretty excited to get this press, but man…

Is this thing just not designed for harder fruit like pear or apple? Maybe something with more liquid like grapes or peaches would be easier and faster to deal with?

I’ve heard that pears are notoriously difficult to juice. I tried it only once, using my home-built fruit press
http://forum.northernbrewer.com/viewtopic.php?f=29&t=90111
. I put the pears in a nylon paint strainer bag and pressed them, and got a pretty fair amount of juice. IIRC, I ended up with about a gallon of juice from 4 lb of pears. I could be wrong on that though - it was probably 5 years ago and I didn’t keep notes.

IME the rate is closer to 14-16lbs per gal.
Any idea what variety they are?

Yeah, you could be right on that. I might have bought an entire flat of pears (14 pound lug?) for the gallon of juice.

I fermented the perry and let it age for at least a year if not more before finally bottling it. I guess I don’t get too motivated by wine, mead, etc. We were moving and I bottled it up out of necessity. I didn’t carbonate it, and it tastes pretty good. I think I still have 6-7 bottles left from the one gallon batch.

Good luck. I wonder if you’d get more juice by freezing the pears first? Or would that set the pectin?

Freezing is not an issue. They should juice easier since the cell walls will be ruptured. Milling or shredding before pressing would be your best bet.