I recently racked a 1.057 wort onto a US-05 yeastcake left from a 4.6% IPA. It was at full krausen and coming out the blowoff in under 5 hours at about 65 degrees F. I wasn’t too concerned until I @loopie_beer (Thanks!) mentioned that this was a massive overpitch which I’d never considered. I’ve searched the NB forum, other forums, and the web in general looking for definitive info on overpitching at the homebrewer level without much success. Thought it might be a good topic for discussion. Does anyone have any experience with negative effects of overpitching? Links to good info on overpitching?

Nope I’ve racked o full cakes before no problems. ThE reason I pull some out is your next beer will have alot of junk in the bottom to deal with also it takes up space in the fermenter. Plus if I want to crop some of the yeast.

Interesting topic. I’ve never experimented with side by side small batches. Just occasional reading. Had found this abstract. Seems there may be an effect increasing diacetyl levels. Never bought the full paper. 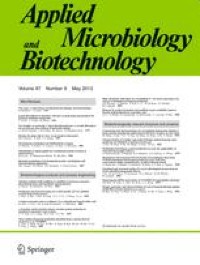 The volumetric productivity of the beer fermentation process can be increased by using a higher pitching rate (i.e. higher inoculum size). However, the impact of the pitching rate on crucial fermentation and beer quality parameters has never been...

Abstract
The volumetric productivity of the beer fermentation process can be increased by using a higher pitching rate (i.e. higher inoculum size). However, the impact of the pitching rate on crucial fermentation and beer quality parameters has never been assessed systematically. In this study, five pitching rates were applied to lab-scale fermentations to investigate its impact on the yeast physiology and beer quality. The fermentation rate increased significantly and the net yeast growth was lowered with increasing pitching rate, without affecting significantly the viability and the vitality of the yeast population. The build-up of unsaturated fatty acids in the initial phase of the fermentation was repressed when higher yeast concentrations were pitched. The expression levels of the genes HSP104 and HSP12 and the concentration of trehalose were higher with increased pitching rates, suggesting a moderate exposure to stress in case of higher cell concentrations. The influence of pitching rate on aroma compound production was rather limited, with the exception of total diacetyl levels, which strongly increased with the pitching rate. These results demonstrate that most aspects of the yeast physiology and flavour balance are not significantly or negatively affected when the pitching rate is changed. However, further research is needed to fully optimise the conditions for brewing beer with high cell density populations.

Abstract
The aim of the study was to determine the effect of the initial number of yeast cells in the wort on the process of fermentation, maturation and the content of the volatile components of beer, as well as the viability and vitality of the yeast biomass. The experiments were performed on an industrial scale, with fermentation and maturation in cylindro‐conical fermentation tanks with a capacity of 3800 hL. Yeast for pitching was collected after secondary fermentation (third passage) and wort pitching levels were 5 × 106, 7 × 106 and 9 × 106 cells/mL. During fermentation and maturation, the changes in the content of the extract, yeast growth, yeast vitality and selected volatile components were investigated. Experiments showed that the yeast inoculum had a significant impact on the course of the fermentation and metabolic changes. With increasing numbers of cells introduced into the wort, the content of the esters and fusel alcohols increased, while the acetaldehyde concentration decreased. These changes affected the final quality of the beer. Copyright © 2015 The Institute of Brewing & Distilling

The effect of pitching rate on fermentation, maturation and… Available from: https://www.researchgate.net/publication/280394776_The_effect_of_pitching_rate_on_fermentation_maturation_and_flavour_compounds_of_beer_produced_on_an_industrial_scale [accessed Apr 14 2018].

Home brewing and commercial brewing may not be the same but in some aspects they may be the same.

With my nonscientific study AKA brew beer and don’t worry, I have found that it seems impossible to really over pitch yeast on a home brew scale. Maybe if you pitched a ridiculous amount. I would worry much more about under pitching.

@flars I almost nodded off reading your article

Is it me or in the end did it not really answer the question they were discussing?

Just the abstracts without conclusions in entirety. You would need to purchase the full study. I would nod off reading the entire study.

You would need to purchase the full study.

Would it be cheaper than sleeping pills?

If you’re nervous just rack it to a secondary after about 5days or better yet a keg and let it naturally carbonate.

That sounds like a very interesting idea. Still going nuts. Moved it to the cold part of the basement hoping it gets under control. So far still going full throttle.

I think temperature control especially in the first few days is going to have a much greater impact on beer quality than number of yeast cells. With higher yeast counts, fermentation will be more aggressive, as you have noted, which means more heat production making temperature control that much more important.

Well, through out my years of brewing, I’ve pitched what appears to be the bare minimal, and up to a fresh yeast cake and all my results showed I made … beer… There was only 2 times it didn’t… that was due to poor sanitizing… There I made a pickled beer… From my perspective, sanitation WILL affect brewing more so than yeast counting… I’m not discounting yeast discussions about volumes… Sneezles61

I pitched a 1L starter of WLP 001 in a 1.062 wort at 62 degrees on Thursday. The krausen has continued to build slowly even at 61 degrees now. Will be lucky if we don’t need a blowoff. Kind of surprising given the temperature.

Pictures of fermentors in action are always nice to see. Great for new brewers to see what is normal and the not normal fermentation.

Thanks Frank! Here’s some pics. I consider these normal although they’re a little more active than I like. The first one is both fermenters sitting in a safety tub. Both started with over a gallon or more of headspace. The second pic is the one I pitched on the US-05 yeastcake. The third is the WLP 001 which has been gradually been building krausen since Thursday even though the fermometer is showing it to be 61 degrees F. (Photo doesn’t show it well) 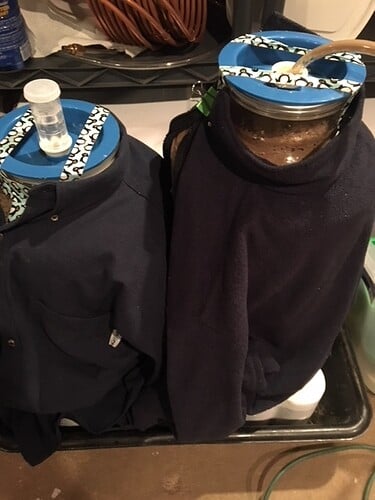 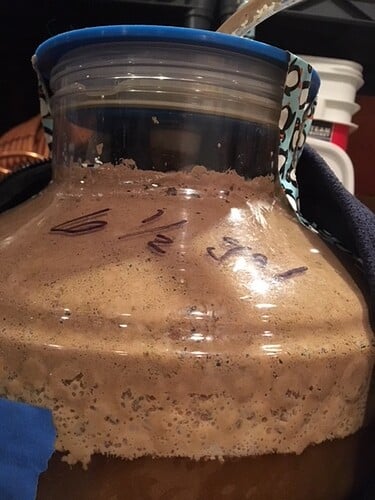 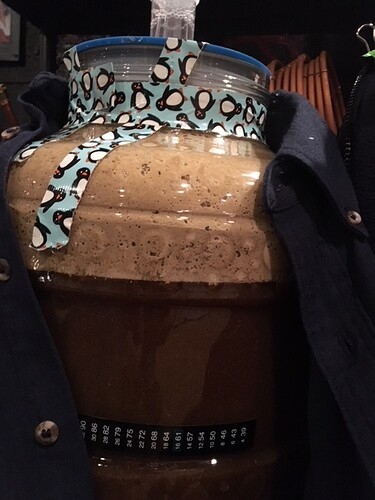 Good photos. I’ve had some fermentations with a thick yeasty krausen also. I thought even though using a calculator to get near the correct pitching rate I was over pitching.

I wouldn’t worry in the least about that level of overpitch. I’ve done it many times without issue.

Thanks man! We’re 60 some batches in and have come to the realization that almost always it’ll likely be beer and we’re probably going to drink it.

This is the second time doing this and the first one was fine.